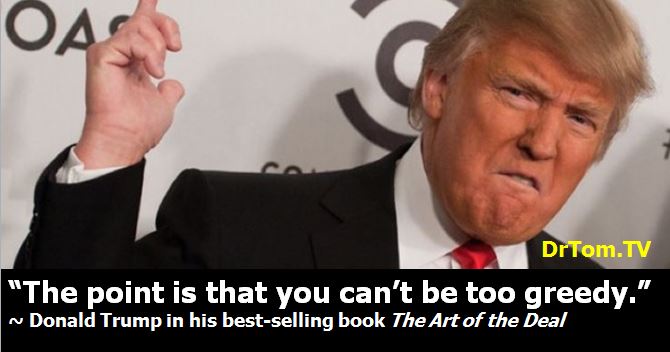 This statement is part of Donald Trump's core business philosophy, as articulated in his best-selling book, "The Art of the Deal." He doubled down on this in an interview on "Special Report" when he said that eminent domain - even for private business projects - is "a wonderful thing." He continued, "You're not taking property." What else would you call it when a business developer teams up with government to steal a beloved home that has been in a family for generations?

Eminent domain is the right of a government to take private property for public use, with payment of compensation. An example of this is when a house is in the path of a highway and there is no way to build it without taking the house. This right of government is found in the Fifth Amendment to the Constitution.

Eminent domain became a national issue on June 23, 2005 when the US Supreme Court ruled 5 to 4 that "public use" could mean "private use." In this case a little pink house in New London, CT, owned by Suzette Kelo was taken by the city for the use of a private developer. The supposed public interest was that the development would bring in more taxes than Ms. Kelo paid. This was clearly not the "public use" that the founders intended. Yet Trump praised the decision.

The end of this story was that Kelo's house, along with 15 others, was bulldozed. Today the land is a huge empty weed-covered lot because the developer couldn't raise the funds to complete the project.

Trump argues that "holdouts" (people who want to keep their family homes) like Suzette Kelo don't "love their homes." They just hold out for more money. The fact is that many people do love their homes, and don't want to sell for any amount of money. But of course, under the Fifth Amendment they are obligated to sell their homes for "fair compensation" in a true case of a public benefit.

But Trump has gone to court to force people to sell their homes to the government, so that the government could in turn sell the land to him. There is no "public benefit" here. There is only "Trump benefit." He told the court that his development project would result in "thousands of jobs." I'm sure that was typical Trump hyperbole. But even if it resulted in hundreds of jobs, it wouldn't trump the Constitution. (Please excuse the pun.)

Trump claims that the people forced to sell their homes get four, five or six times what they're worth. In many well-documented cases homeowners have gotten far less than fair market value. But that avoids the main point. What value can you put on a home that your grandparents built, where your parents were married, and where you were born? Trump says that doesn't matter because you can build a bigger house in a nicer neighborhood. He doesn't understand their "sentimental" attachment to their family home because he thinks greed is good.

In the interview Trump said, "I fully understand the conservative approach." Does he? John Locke, a 17th century English political philosopher is known as "The father of American political theory." He believed that "life, liberty and estate (property)" were unalienable rights possessed by every man. When Thomas Jefferson quoted him in our Constitution, he changed "property" to "the pursuit of happiness." But the Founding Fathers understood that private ownership of property was an essential part of happiness.

Locke would not have understood a Supreme Court that allowed government and big private developers teaming up to bully average Americans into selling their property so that the government could rake in more taxes and the rich developer could get richer. And I don't think he would have agreed with Trump that today's perverted system of eminent domain is "wonderful."

Watch the VIDEO in which Trump defends eminent domain for private use...
https://youtu.be/ULAosIM-bN4?t=234