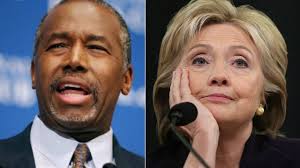 According to a November 1 Quinnipiac University poll, if the election were held today, each of the major Conservative candidates except Trump would beat Hillary. Carson wins by an amazing 50 to 40; Rubio 46 to 41; Cruz 46 to 43; and even Christie, who polls lower than most all Republicans, beats her 46 to 41. Of the front-runners, only Trump loses to her, 43 to 46.

Although not as well-known as other pollsters like Gallup, the Quinnipiac University poll is highly respected - and has been highly predictive in the past. Keep in mind that the primary polls only tell part of the story - they tell us how Republicans rate their people, and how the Democrats rate theirs. But the head-to-head matchups show us how ALL voters - Republicans, Democrats, and the all-important Independents - would vote when faced with the choice of one person from each party.

This tells us two important things - first, the things the pundits have been telling us are vitally important aren't necessarily all that important. For instance, "It's all about the outsiders - people are sick of the Establishment." If that were true, Trump and Fiorina would be beating Hillary - and Rubio, Cruz, and Christie (insiders all) would not.

Second, it is becoming increasingly clearer that voters are hungry for honesty and integrity in the person for whom they will vote. The person of either party that they most trust is Dr. Ben Carson. The person they wouldn't trust to feed their cat is Hillary. Trump also polls low in honesty and trustworthiness, which is likely why he loses to another untrustworthy person, Hillary, while his colleagues beat her.

One other interesting fact that came out of this poll. Even though Hillary's entire platform seems to be, "I am a woman," Ben Carson leads her by a small margin among all female voters nationwide.

Now here’s the conundrum. Carson and Trump are virtually neck and neck in most national polls, and are tied within the margin of error in others. So why is it that Carson beats Hillary in a head-to-head with a huge margin of 10% - and Trump loses to her? It doesn’t make sense.

But it does make sense if you keep in mind what I stated earlier. The primary polls show who each party prefers (at the moment, at least – remember, the election is a year away) as their nominee. They don’t show anything about the likely results of the general election, when the eventual candidates of the two parties will face off against one another. That’s where the head-to-head matchups can give us insight.

Let’s take a moment to study the dynamics of primary elections versus general elections. The primaries are where each candidate tries to convince his or her party that he or she is the only one who can win the big dog fight against whomever the other party elects as their champion.

Think of them as gladiators. A bunch of gladiators fight amongst themselves, killing as many other gladiators in the process as possible, until only two gladiators are left standing. Then the real fun begins. The final two gladiators do their best to kill one another; and one emerges victorious.

But here is where the analogy fails. Amongst gladiators toughness and skill are all that matter. The audiences all want the same thing – lots of blood and gore. But the political “audiences” require subtlety, something the gladiators never had to worry about.

The “audiences” (the voters) in the two political contests are fundamentally different. We tend to think that the same people vote in both the primaries and the general election. And to a large degree that is usually true. But in any presidential election year there is always a significant difference between the crowd of voters of both parties who turn out for the primaries and the general election.

You see, the primaries tend to attract the extremes of their respective parties. The farthest right Republicans are energized in the primaries if they see a chance that they can engineer the nomination of a true Conservative. To them, this would be someone who will not compromise on any issue that would violate the Constitution or any widely-held Conservative principles.

Likewise, the far left fringe of an already far left Democrat party gets excited when they think they can get a Socialist or Marxist nominated. Look at the excitement Bernie Sanders has generated. The man is not even a Democrat – he is a registered Socialist - yet he has topped Hillary Clinton in some polls in the race to become the nominee of the Democrat Party!

(This time around the Republicans – in my view – don’t have a hyper-Conservative wild-eyed far right candidate in their large pool. Trump seems to fill the role of the super-Conservative by very loudly saying Conservative-sounding things: “I will deport all the millions of illegals in the country!” Or, “I will build a HUGE wall – and make Mexico pay for it!” The problem is that he is very Liberal on the social issues that matter most to the Conservative Christian Evangelicals who will heavily impact both the primary and the general elections.)

We have seen this time and time again. The far-left and the far-right folks turn out in large numbers for the primaries. These have to be the most optimistic people in the world, because hardly ever do their preferred candidates receive the nomination. This is because the powers-that-be in both parties know that candidates on either extreme don’t play well in the general election.

Unfortunately for their parties, the same people who were so excited during the primaries often  lose their enthusiasm after the party nominee is announced. If “their” candidate is not chosen, very often they will not even turn out to vote in the general election. But they are offset by the straight-party-line votes of both parties who don’t bother with the primaries – because they know they will vote for whomever their party nominates.

Here’s an example. Many evangelical Christians did not want Romney to win the nomination because he was a Mormon. When he became the nominee some I knew said they weren’t even going to vote in the general election. I asked them, “Which would you prefer, a Mormon or a moron?” Obviously my logic didn’t sway them, because the nation elected the moron to a second term. This is very sad because if the Evangelical Christians had turned out in high numbers, we would not have had another four years of Obama misery.

Here’s something many of you don’t know. In the primaries, all the attention is on the two big parties – the 25% of the electorate who self-identify as Republicans and the 29% who call themselves Democrats. Most people believe that political contests are won by Democrat and Republican voters. If that was all there was to it, then every dogcatcher, school board member, mayor, state legislator, national senator and congressman, and president would be Democrats. (And the country would be in SERIOUS trouble.)

And if it was true that Democrat and Republican voters elected presidents, why have so many of us stayed up until two or three AM on election nights waiting anxiously for the poll numbers to come in? We know how the Democrats and Republicans will vote, and we know there are more Democrats.

Is it because of turnout? About 90% of Democrats care enough to turn out for general elections, compared to 93% of Republicans. All the difference in turnout does is to bring us closer to a break even number of votes.

No, the people who give both the Democrat and the Republican parties nightmares are the 42% who self-identify as Independents; 42% is only 12 points shy of the total of all Republicans and Democrats! These are the people who decide elections. No wonder the Big Two parties are terrified of them.

That still leaves a panic-producing 13% of Independents that they can’t control. They can only appeal to them. This is why the DNC and the RNC (the establishment people of the two parties) use all of their considerable power and money to ensure that their parties nominate “moderates.” Because that’s who the Independents say they want.

Imagine the tight-rope candidates of both parties must walk. (I’m talking about the serious candidates who are really running for the office; not the nutcases like Sanders who just want their crazy ideas to be heard.) They must first convince the extremes of their respective parties that they are left or right enough to be considered trustworthy standard-bearers of their party. Then they have to convince the Independents that they are NOT far left or far right to earn their votes.

By and large Democrats are going to vote Democrat. No matter how much sense the Republican candidate makes, they are going to go for the candidate with the D because she has promised them lots of free stuff; because their family has always voted D; or because they have no morals and don’t care that they are voting for the party that champions abortion on demand and homosexual marriage.

Likewise, Republicans are going to vote Republican. Whether it’s because their parents have raised them right; because they have enough sense to understand that government can only give what it has first stolen from someone else; or because they believe the Bible and know that the Democrat Party platform violates the teaching of the Word, they are going to vote for whoever has the R by their name.

That leaves it to the Independents. Nine years ago only 27% of Americans said they were Independents. Within the last year, according to Gallup, that number has been as high as 47% - a 20% increase. If the number of Independents tips over 50% we could have a whole new ball game in this country.

No matter how hard the Big Two try to hide it, they are losing power and influence. And that’s a good thing. For more than two centuries two parties have controlled the electoral process of a great nation with an iron grip. Now the power is beginning to be returned to the people.