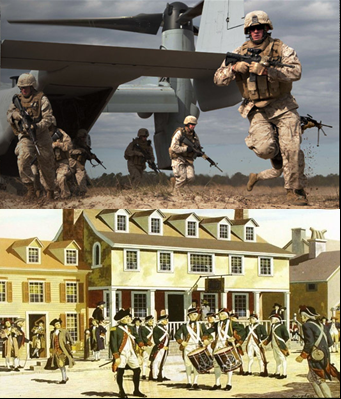 Wednesday was Veteran’s Day. Usually my articles about veterans encompass all the services. But today I want to focus on one branch, whose 240th birthday was one day before Veteran’s Day. Of course I am talking about the U.S. Marines. Hopefully you will learn things about this elite fighting force that will help you appreciate their special place both in U.S. history and in today’s dangerous world. There is no force like the Marines!

The Continental Congress commissioned Robert Mullan, the proprietor of Tun Tavern, to raise the first two battalions of Marines, under the command of Major Samuel Nicholas, the first Commandant of the Marines. The U.S. Marines have been the first branch of the U.S. armed forces to serve in every war since that day. They have mounted over 300 assaults on foreign shores, from the arctic to the tropics.

There is a special aura surrounding the word “Marine.” It means something different from a soldier, a cut above - and more is expected of them. Pride and cockiness are the trademarks of the Marines, the strongest brotherhood in the world. To serve in the Marine Corps is to serve in an organization that demands and delivers excellence beyond all others. Service in the Marines leaves a lasting impression upon the innermost being of everyone who is privileged enough to serve. “Once a Marine, Always a Marine.”

The origin of that statement is credited to a gung-ho Marine Corps Master Sergeant, Paul Woyshner. During a barroom argument he shouted, “Once a Marine, always a Marine!” Master Sergeant Woyshner was right. Once the title “U.S. Marine” has been earned, it is retained for life. There are no “ex-Marines” or “former Marines.” There are (1) Active Duty Marines, (2) Retired Marines, (3) Reserve Marines, and (4) Marine Veterans. Once someone has earned the title, he or she remains a Marine for life.

One of the proudest days of my life was when, at 18 years of age, I became a U.S. Marine. Getting to Graduation Day was the hardest work I have ever done. Our Drill Instructors pushed us, encouraged us, threatened us and bullied us. They reminded us constantly that if we were going to fail, they wanted us to do so at the Paris Island boot camp - not in battle where we might get our buddy killed. 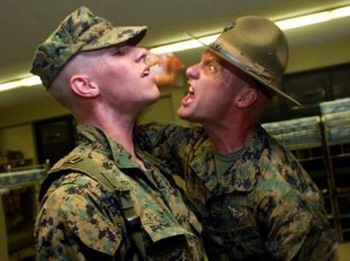 I joined the Corps in 1966, right out of High School. Because this was the height of the Viet Nam war, they reduced our Boot Camp from 12 weeks to 8 weeks. This didn’t mean that we got less training. They jammed every bit of it in. We just got less sleep. Many mornings before the sun came up our Drill Instructor would turn on all the lights, bang his long wood baton against a steel trash can, and scream at the top of his voice, “Get up, get up, get up, get up!!”

One of the fun activities in which we engaged was crawling through mud a few inches below strings of barbed wire. We were holding our rifles in our hands and crawling on elbows and knees. We were informed that if our rifles got a speck of mud on them, the consequences would be severe. All the while machine guns on tripods were firing real ammunition just inches above our heads. Our Drill Instructor took great delight in telling us the story of a recruit who came face to face with a rattlesnake and jumped up. He was cut in half by the machine gun fire. I took great care to stay low, and prayed that I would not meet a rattlesnake.

Another delightful experience was the ten mile run in 100 degree heat. We were in full uniform including heavy steel helmets and heavy leather boots (no running shoes were allowed in those days). We also carried full packs and our heavy rifles. We got a five minute rest break after five miles. If a recruit “fell out” (dropped out of the run and lay on the ground) the Drill Instructors would encourage him to get up and rejoin his buddies by kicking him until he did so.

There was this gray-haired Marine General, the Base Commander, who walked with a limp. But he ran at the front of the recruits every time they did this excruciating run. He never slowed down for a second. He was three times our age and had a war injury, but he could run circles around us. We hated that general.

We also got to go swimming. They made us jump into a huge pool fully clothed, including boots. This was called “drown-proofing.” Since at some point in our careers we would all be transported by the Navy, they thought it would be a good idea that we spend four hours in the pool to see if we would drown if the ship went down. (They warned us that if we died during this exercise, we would be automatically discharged from the Corps.)

Some of the guys panicked and tried to climb out of the pool. The Drill Instructors would stomp on their fingers or kick them in the face. I spent my four hours treading water and writing letters in my head to my girlfriend. I also fantasized about what I would do to my Drill Instructors if I ever caught them alone in town.

Gas masks were big in those days. So they took us to a small building carrying our masks, filled the building with tear gas and locked the door. (Tear gas is very painful, particularly for your eyes, throat and lungs. It also makes your nose run uncontrollably, and – as the name implies – makes the tears literally flow from your eyes.) Naturally we wanted to put on our gas masks. But no! First we had to sing the Marine Corps hymn and recite our General Orders. (Singing and talking both require you to breathe in, so we got lots of tear gas in our lungs.) Finally, after what seemed like a few hours - but was probably only five minutes - they let us mask up.

There was much more, but I will close with the Confidence Course. This was supposedly designed to give us self-confidence, but – like many of the exercises we endured - was actually a test of teamwork. When we went on the ten-mile run, we helped the guys who were about to fall out, with two of us grabbing them under their arms and half dragging them with us. The same was true of the Confidence Course.

The Course consisted of fun things like climbing up an impossible slick wood wall. Some of the taller, more athletic guys made it to the top with little effort. They would then sit on top and help some of their weaker brothers make it over. We had to climb fifty feet to a platform where a steel cable was attached. The cable ran over a pond with two feet of mud at the bottom, downward to a six foot high post where the other end of the cable was attached. This was called the “Slide for Life.” 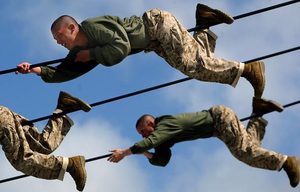 You had to lie on top of the cable and pull yourself quickly hand over hand downward until you could dismount at the post. If, like me, you didn’t pull fast enough you would flip over so you were hanging from the cable in a position where it was almost impossible to continue. Eventually several of us fell into pond, and with great difficulty pulled our boots free of the mud and made it to the edge of the pond. Naturally the Drill Instructors comforted us and wished us better luck next time. NOT! They made us climb right back up, exhausted, wet and slimy with mud. This continued until we succeeded.

The Confidence Course and many other evolutions taught us to work together as a team. They taught us that our lives would someday depend on the person to our right or left. Boot Camp is where the brotherhood starts. But it never ends.

The day before I left for Boot Camp I went to a pizza restaurant to pick up a pie to take over to my girlfriend’s parents’ house for a goodbye dinner. Like many such places, there was a bar attached to the restaurants. Three drunken sailors heard me mention Paris Island and came over to harass us. I told my girlfriend to go wait in the car and lock the door. I wasn’t about to walk out without dinner – I like pizza too much!

I tried to ignore them for three reasons: They were all bigger than me; I didn’t like the odds; and I hadn’t yet gone through Marine training to become a professional killer. But they persisted, and it was about to get very ugly. Suddenly they shut up; I didn’t understand why. I got my pizza, and was leaving when two Marines in civilian clothes said “Semper Fi!” to me and went on their way. I found the three sailors outside by the bushes, beaten and unconscious.

People ask me if I hated the Marines for what they put me through. My answer is always the same. “You couldn’t pay me enough to go through it again. But I wouldn’t take any amount of money for what I learned and gained through both Boot Camp and my service in the Marines.”