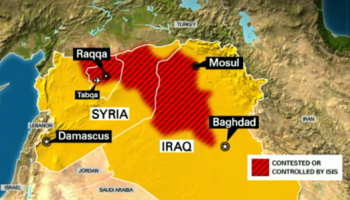 ISIS is a nation that controls about 35,000 square miles - it's as big as Austria, Hungary and Portugal. It has taken over half of Syria and a third of Iraq. It has all the elements of a nation: A government; an army bigger than the armies of many nations; revenues, both from taxes and captured oil fields; a sophisticated system of courts; and it calls itself a nation. We should do as France has done: Declare war on ISIS - The Islamic State, as they like to call themselves. This would allow us to engage them as we would any other enemy nation. No more treating their actions as criminal problems and sending the FBI. Call it what it is - a war against an Islamic State, and take the chains off our military.

There is no question that we are at war with ISIS. Even the President of France, François Hollande, the head of the Socialist Party, showed more courage than Obama by declaring France to be at war with ISIS. You can't declare war on a movement, an organization, or an abstract concept, such as "The War on Poverty." France declared war on a nation, and the next day started bombing that nation's capitol, Racca. Hollande made it clear that France was fighting a State (a nation). He said the Paris attacks were committed by "the Islamic State, a jihadist army, against France, against the values that we defend everywhere in the world, against what we are: A free country that means something to the whole planet.”

Why is it that a liberal Socialist nation like France can acknowledge that we are at war with Islamic terrorists and Obama cannot? Even King Abdullah II of Jordan stated this week, "This is a war within Islam." He also said "We are facing World War III" (a sentiment the Pope acknowledged) and said, "We are not waiting for WWIII to be declared." So a varied group of leaders including a Socialist president, the Pope, and the King of a Muslim nation all acknowledge that we are at war with Islamic terrorists, that we may already be in the first stage of World War III. But our president, who has killed more jobs than terrorists, seems to think it's all just "workplace violence."

We need to attack ISIS vigorously. But the number of airstrikes we have sent against ISIS are pitiful compared to the massive number of strikes during Operation Iraqi Freedom. Obama keeps sending a few bombers a day so that he can say that he is attacking ISIS. But Russia bombed more targets in its first 48 hours of engagement than our forces had launched in months. Yes, many of Russia's strikes were against anti-Assad rebels backed by the US; and no, I am not happy that Russia is there. But they filled a vacuum left by Obama's timidity in fighting ISIS. This is the same thing that happened when Obama pulled all troops out of Iraq too early - ISIS filled that vacuum.

ISIS is a nation that has attacked our forces and our allies repeatedly. They have said they are going to attack Washington, DC next. I believe them, because they are already here. The FBI has over 1,000 ISIS investigations underway right now in all 50 states!

Obama needs to get an x-ray to locate his spine. Then he needs to ask Congress for a Declaration of War against the Islamic State. And then we need to carpet bomb ISIS-controlled areas and arm the Kurds and others who are willing to help us fight.

"But won't civilians get hurt?" Civilians get hurt in every war. They are being murdered by the hundreds every day by ISIS, particularly Christians. We have been dropping leaflets warning civilians to get out of ISIS military areas, and we should continue to do so.

But Obama needs to radically change the Rules of Engagement (ROE's) our military personnel have to follow. They are the strictest in the history of our nation, and they virtually insure that their missions will fail. Obama's ROE's are not militarily motivated, but politically motivated. He doesn't want to win. He just doesn't want anyone to say that a civilian died on one of our strikes.

As a result, military people are reporting that 75% of their air missions are aborted before they can drop their bombs. This means we spend millions of dollars and risk millions of dollars’ worth of aircraft. But the pilots have to return to base if there is the slightest risk that even one civilian might be hurt in the raid.

What about the thousands of civilians that ISIS has murdered? I think they would have approved of air strikes that could have saved their families and villages, even if there was a small chance of civilian casualties.