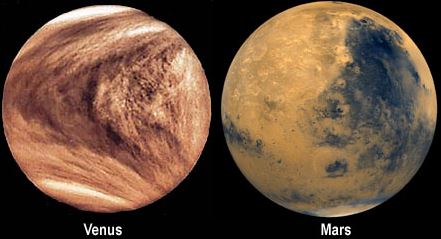 The book Men are from Mars, Women are from Venus demonstrated how different men and women are. Conservatives and Liberals are similarly dissimilar, but exit polls this week cast a completely new light on just how different they are.

The polling asked Democrats in Nevada and Republicans in South Carolina to name the most important issues to them in this election. The results were nothing short of astounding. It was almost as if the two groups actually were from different planets.

Both parties were concerned about The Economy and Jobs. For Democrats this was number one on their list – 35% of them chose this issue. Republicans thought this was the number two issue – 29% of those interviewed chose this as their main concern.

The similarities stopped there. 32% of Republicans said Terrorism was the single most important issue facing the nation. Only 7% of Democrats thought it was the key issue.

But those were the only two issues that made the list of the top four for both parties. Amazingly, Income Inequality came in at number two on the Democrat list, with 28% of Dems saying that how much people got payed was the most important issue in this election. Who even talks about Income Inequality besides politicians? I have been involved in thousands of political discussions over the years, and not once has this subject come up.

Perhaps I run in the wrong circles. Are there actually people who think Income Inequality is four times more important threat than Terrorism? Income Inequality isn’t even a real campaign issue. No president can change the fact that top executives at national and  international companies will always get paid more than the janitors. But a president can have a strong impact on Terrorism. He can encourage it, as Obama has done by showing his weakness. Or he can go after Terrorism with all our fearsome national might, as our next – Republican – president will do.

The Democrats put Health Care at number three on their list, with 23% stating that was their number one consideration in voting for a president. At first I thought, “What are you whining about? You got Obamacare just like you wanted.” But then I realized that, just like Republicans, Democrats are now paying higher premiums for worse health care coverage. They are also paying higher co-pays, and their deductibles are much higher. Is it possible that they have seen the light? Probably not; most have drunk the Obama Kool-Aid. Even though they’re paying more for less, they still believe in their Messiah and the “universal health care” he promised. The fact that there are actually fewer people insured today doesn’t changed the minds of the brainwashed drones.

Republicans put Government Spending at number three, with 26% of GOP voters choosing that as their primary voting issue. When Obama was first elected I predicted on these pages that the National Debt would top $20 Trillion by the time he left office (if Americans were foolish enough to reelect him). At the time hundreds of people took the time to send emails informing me how stupid I was to even think such a thing. It looks like I will be proved right. After 7 years in office, the National Debt sits at $19 Trillion, and will likely go over $20 Trillion in the next year.

To put that in perspective, in the last seven years of Obama’s stewardship, the National Debt has risen more than it did in the first 225 years of our nation under the first forty-two presidents. Obama has added over $8 Trillion in seven years. President Bush added $5 Trillion in eight years. He was a great Defense Conservative and a Social Conservative; but he was not a Fiscal Conservative. Bush’s record was bad enough. But by the time Obama leaves office, he will have added almost twice as much per year as Bush did.

10% of Republicans said that Immigration was their key issue, making it number four on the GOP list of issues. They believe in legal immigration, but want to keep illegals and people from nations that sponsor terrorism out of our country, because ISIS has bragged they have imbedded trained terrorists among these people. The Democrats don’t have Immigration on their list at all, because they see every illegal and every Muslim immigrant as a future Democrat voter.

The Republicans did not caucus in Nevada when the Democrats did. And the Democrats did not hold their primary in South Carolina when the Republicans did. So the two polls have obvious differences - different states and different types of primary processes. But both were taken on the same day, and they are clearly illustrative of the great divide between the two parties.

I do not consider myself a Republican (I am a Christian Constitutional Conservative – a description I wish we could use for all Republicans). But my view on these two exit polls is that the Democrats were under the influence of something illegal, and the Republicans were thinking clearly.

The Democrats placed high priority on minor issues, and downplayed or totally ignored the serious ones. How could they not understand that Government Spending – the National Debt is now greater than all of the assets of the US – is killing our nation?  But it’s not even on their list of the top four issues.

The Republicans were right to put Terrorism at the top of their list. Obama has pushed away our only ally in the Middle East, endangering Israel’s very existence. And he has handed $150 Billion to Iran for distribution to its terrorist proxies. They Republicans also showed that they understand that Government Spending is one of the gravest threats to our national security.

But the thing that frightens me most is that four times as many Democrats (28%) believe that Income Equality is a greater danger to America than do the pitiful number (7%) who recognize thatTerrorism is our gravest threat. Friends, these oblivious Democrats represent half the voters in the nation. How can this be?

Fortunately, the other half of the nation teaches their children what the Founding Fathers taught. Conservatives tell their kids: “Government does not give us our rights – God does. The Government can make mistakes – and often does. You need to study the Founding Documents and stay informed about current events. Most important, think for yourself and make your own decisions.”