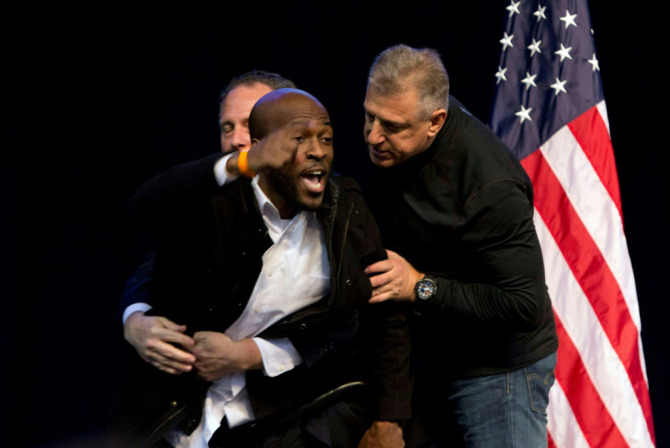 Who were these champions of the First Amendment? Many think they were organized by the Bernie Sanders campaign, because many carried his campaign signs. But I don’t believe that was the case. It’s not Sanders’ style. These were mostly street punks who had no idea why they were there other than an opportunity to cause chaos and throw a few punches.

That’s not just my opinion. Reporters on the scene who interviewed the protesters said most had no idea of who they supported for president, what the issues were or what Trump stands for. They just came because they saw on Twitter and Facebook that people should come out and “Stop Trump.”

So who organized this travesty? MoveOn.org has taken credit for it, and thanked all the violent thugs who participated. Of course, MoveOn is funded by George Soros, so Trump’s statement that many of the protesters and organizers were paid may well be true. Another indication that the protest was well-funded is that their signs and T-Shirts were professionally produced.

This was no spontaneous protest. In addition to the fact that it takes time to print signs and have T-shirts produced, there are several other indications of central planning. Only Trump supporters were allowed into the arena, so the Liberals had to lie to get in (as hundreds did). Protesters were wearing the same type of T-shirts under their hoodies. They were supposed to take off the hoodies and expose their T-shirts when Trump arrived. Then they were instructed to rush the stage.

When it was announced that Trump would not speak because of the danger of violence, they took off their hoodies and started dancing, cheering and shouting “We beat Trump” in their anti-Trump T-shirts. Fist-fights, shoving and scuffles ensued, with several protesters being arrested. Two police officers were injured by the lawbreakers.

It wasn’t just MoveOn funded protesters, though. Some wore sporty T-Shirts with “Muslims Against Trump.” Others protesters included “Black Lives Matter”, “F*** the Police”, homosexuals and lesbians, and the usual assortment of anarchists, Socialists and Communists. The one thing all these have in common is that they are funded by George Soros and other Socialist and Democrat groups.

There were also illegal aliens waving Mexican flags, and Bernie Sanders supporters who interspersed their “We Stopped Trump” chants with cries of “Bernie, Bernie.” But I believe Sanders when he says that while these are “supporters” of his campaign, the campaign didn’t encourage them to go there. My problem with Sanders is that he did not condemn the violence. Instead, he claimed Trump incited it by his angry rhetoric. That’s sort of like saying a young woman invited an assault because she wore a short skirt.

The police have not mentioned Trump supporters initiating any of the fights, although several of them were victims of the violence. In fact, when things got ugly, I saw several Trump people take off their distinctive red ball caps in order to avoid becoming targets of the thugs.

Hillary would probably describe the event as a “spontaneous mob” enraged by a video. But let’s look at the facts:

1)      Several thousand protesters lied and said they were Trump supporters to get tickets to the event.
2)      They hid their distinctive T-shirts under sweatshirts to avoid detection.
3)      They dispersed themselves among the crowd and disguised their intention.
4)      They planned an illegal act (jumping the barriers, rushing the stage, and presumably attacking Trump).

One well-dressed Liberal teenager was interviewed by a reporter. He said, “This is my first election, and I want to be part of the process.” So far, so good. Then he said something so ludicrous that it makes me fear for our nation: “If the city doesn't want him to speak, so be it.”

If this young man doesn’t recognize that a few thousand violent thugs don’t speak for the City of Chicago, he has no reasoning skills. And if he doesn’t understand that even if the majority of the city voted not to allow Trump to speak, that would still violate his First Amendment rights.