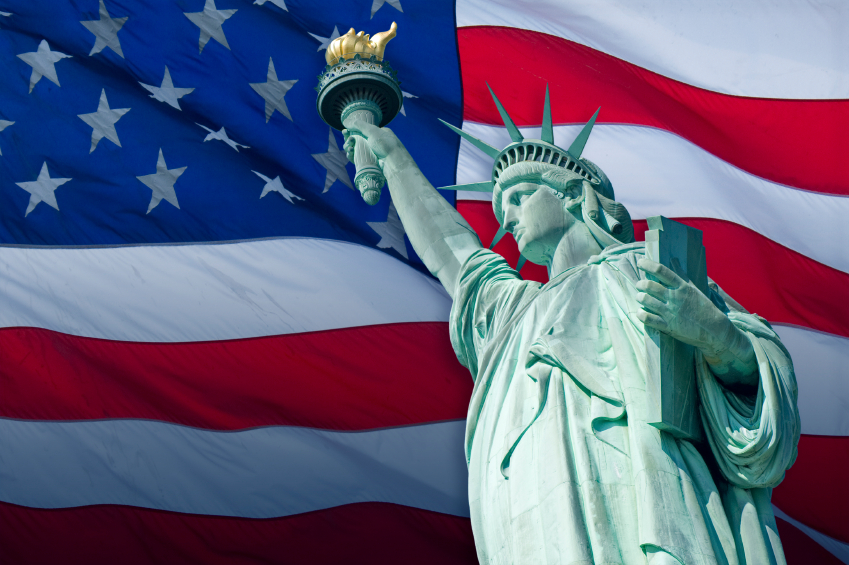 While each of these is a worthy goal, and while I enjoyed each night of the convention as they expanded on these themes, I have an idea for Trump. I think our greatest goal should be to allow America to be what she once was. We should strive to make America America again.

"Make America Great Again" has a certain appeal. Many people (myself included at times) have lamented that America is no longer the great nation that she once was. But when you really examine our present state, you see that is not really true. We are still the only nation on earth that was founded as a Christian nation. We are still the most generous nation on the planet. And we are still the leader of the free world, always there to defend liberty. America is still, and always has been the greatest nation on earth because our unifying principles come from the Word of God.

Also, "Make America Great Again" has given the Democrat Socialists and anarchists a new battle cry: "America was NEVER great." We know that their dark, bitter little hearts will never acknowledge the greatness of America, but why give them ammunition?

The truth is that America never stopped being great. But we stopped electing great leaders. We have allowed our leaders to define us, and because of that many patriots feel that our nation is in decline. We need to realize that our God and our people define who we are as a nation. And we need to start electing leaders who reflect our values, our love of country, and our devotion to the Biblical principles the Founding Fathers laid down for us in the Declaration and our Constitution.

Today we are cursed with a president who does not share any of the values that the majority of Americans hold dear. He has made it clear that, far from loving our country, he despises her. And, though he claims to be a constitutional scholar, he uses every opportunity to weaken the Constitution and chip away at the liberties it affords us.

Most Americans realize this and are holding their collective breaths until the wonderful day he leaves office. They pray that he won't do any more serious damage to our Republic before that blessed day. Most of them are blind to the fact that he has set us up for an even worse president, handpicked by him.

How could Hillary possibly be worse than Obama? For several reasons:

1) Obama has greatly weakened the Congress, while he has greatly strengthened the executive branch. This will allow Hillary to advance even further toward their shared goal of an all-powerful government with few constraints.

2) Obama's illegal use of Executive Orders has set terrible precedents that Hillary will use to her advantage. Every time he has used Executive Orders to go around Congress and enact legislation, Congress has allowed it to happen without challenging him. This sets the stage for the most tyrannical presidency America has ever seen. And Hillary lusts to be that tyrant.

3) Hillary has something Obama didn't have when he took office - experience. He was a two-bit Illinois state politician who never did anything except push a bill that allowed hospitals to kill babies after they were born. He was elected to the US senate but never really served there. He immediately started campaigning for president, and his second year there was spent on the road non-stop. Basically, he was a no-name, know-nothing community organizer when the Kennedy's and other rich Democrats decided to make him their pick for the White House.

Hillary, on the other hand, has lived off Arkansas and US taxpayers for 43 years. During that time she became an expert at the art of corrupt politics. If you have been dismayed by Obama's misuse of political power, wait until you see what Hillary does if she is elected to serve the third term of the Obama administration. She will make Obama look like an amateur in the areas of lawlessness, corruption, and use of political office for personal gain.

She is the most scandal-ridden public figure of modern times, and one of the least-trusted politicians in America. Friends, there is a good reason why two-thirds of Americans (which includes a lot of Democrats) believe she is a corrupt liar - because she is.

World Net Daily has published a comprehensive list of Hillary's 22 Biggest Scandals. I don't have the time (or the stomach) to go through these (or the dozens of others that she has been involved in). Many public figures are connected to scandals – some justified, some not. But ask yourself: Have you ever known anyone else who has been accused of so much wrong-doing - and managed to use money and political connections to get away with them? The old adage, “Where there’s smoke, there’s fire,” comes to mind.

She has used the FBI and the IRS to terrorize political enemies. She took millions of dollars from foreign governments for her personal use while she was Secretary of State. But the scandal that keeps many Americans awake at night is her association with  Abedin, Hillary’s longtime deputy chief of staff who has worked closely with her for 20 years. Abedin has documented ties to the Muslim Brotherhood and a long history of working for and with Islamic terrorist front organizations. Imagine a president whose closest confidant has a top-secret clearance, and access to all the intelligence the US has on the very Jihadist organizations that threaten us daily.

Unfortunately, Obama and Hillary are not the only failed leaders in our nation. They may be the most corrupt, but they have plenty of company. Congress shares the bottom rungs of the ladder of public trust with labor unions and big banks. It would be nice if we could trust Senators and Congressmen – after all, they make the laws that govern us. But we don’t trust them.

Whose fault is that? Are all the politicians good people who became corrupt when they arrive in Washington? Or were they already egomaniacal power seekers when they were elected? Either way, ultimately American citizens elected them. And American citizens can throw them out of office.

If my contention that America is a great nation that has been damaged by terrible leadership is true, then the only way to “Make America America Again” is to change our hiring practices. We need to hire people to run our nation who share our values, our love of country, and our respect for the Constitution.

Here’s how we can do that:
1) Get to know the people running for office, starting at the local level. Remember, today’s school board members and county commissioners are next year’s state politicians, many of who will move on to national politics.
2) Do your research. There is a wealth of information on the Internet. Don’t just listen to their ads. Look up their speeches and articles and see if they conflict with what they’re saying now to get elected.
3) Look at the morals of candidates. Don’t listen to the lie that a politician’s personal life has nothing to do with his or her suitability for office. If he is immoral in private, he will be immoral in office.

If you want great leaders for our nation, here’s what you cannot do:
1) Stay away from the polls. You have a responsibility to vote. Look at all the terrible people who won office because good people stayed home.
2) “Let someone else do it.” Not all of us are intrigued by politics. But all of us are affected by the people America elects. Do your part. Take some time to support candidates who support America.
3) Stay silent when people attack America and the Constitution. Don’t be afraid to stand up to the blowhards and the bullies. They count on that. Remember Edmund Burke’s words:  “The only thing necessary for the triumph of evil is for good men to do nothing.”

I miss America. I’m tired of career politicians whose only “public service” is to work for re-election as soon as they take office. I’m tired of unaccountable bureaucrats having more power than elected officials. And I’m really tired of people like Obama, Hillary and their followers who constantly tear America down and apologize to the world for our great nation.

Let’s retake our nation, starting now. Ask the Lord whom He wants you to help elect. Then get off your couch and start hiring some new leaders, so America can be America again.