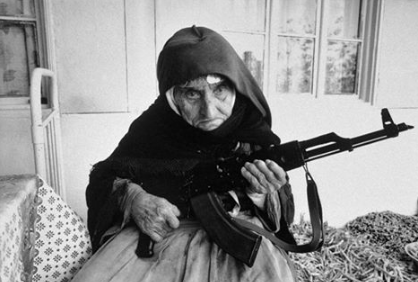 This UN photo of an unnamed Armenian granny was taken in 1990. Her home was in Degh village, near the city of Goris in southern Armenia. This was during the Artsakh Liberation War which lasted from 1988 to 1994 and killed between 20,000 and 30,000 people.

Two of the first Apostles, Batholomew and Thaddeus brought Christianity to Armenia. In 301 AD the Kingdom of Armenia became the first country in world history to adopt Christianity as its religion. Ever since then Muslims have attacked and persecuted Armenians.

In the Artsakh Liberation War the Muslim nation Azerbaijan attacked Christian Armenia in an attempt to take their land. Both nations had been conquered by the Soviet Union. During the Soviet occupation the Communists arbitrarily changed the borders between them, trapping hundreds of thousands of Armenians in Azerbaijan. Although ethnic Armenians had lived in this region (named Nagorno-Karabakh) for most of recorded history – at least 3,000 years - the USSR assigned the region to Azerbaijan to appease the Muslim Turks and avoid conflict.

Following the breakup of the Soviet Union the Parliament of Nagorno-Karabakh, which was a semi-autonomous region of Azerbaijan, voted unanimously to rejoin Armenia. The Armenians, who made up 95% of the population, had been persecuted for many years by the Muslims who controlled Azerbaijan, and wanted no part of that country. But Azerbaijan was not willing to let them go peacefully; thus the bloody Artsakh Liberation War.

The Artsakh War was not the first Muslim aggression against Christian Armenians in the region. Armenians have been murdered and persecuted by Muslims for over 100 years, in numerous instances of ethnic cleansing. But the worst was the Armenian Genocide, recognized as the first genocide of modern times.

The Ottoman Turks decided to cleanse the region of Armenians, and they did so with much planning and precision. They were almost as efficient as Hitler was in exterminating the Jews in Nazi Germany. They planned the Genocide for three years, and initiated it in 1915 during WWI. The Muslims slaughtered 75% of the population: over 1.5 Million of the 2 Million Christian Armenians between 1915 and 1918. Most of the 500,000 who weren’t tortured and murdered were forcibly expelled from the country; many were deported to Syria.

Genocide is by its nature a government enterprise. Genocide is a premeditated and systematic campaign to exterminate an entire people. Only a government can accomplish such a horrendous act. And the Ottoman Muslims were happy to take on the task.

In 1908 a new group that called themselves “The Young Turks” took power in Turkey. One of their main goals was to “Turkify” the nation. They felt the Christians were a “threat” to the country, and began to plan ways to liquidate them.

In 1914 Turkey entered WWI on the side of Nazi Germany. This was the beginning of a close relationship between Nazis and Islamists. To this day many Muslims express great admiration for Hitler. After all, he killed Jews, and they hate Jews. Hitler carried out a mass genocide against Jews; Turkish Muslims carried out a mass genocide against Christians. They also shared a belief that the government should control every aspect of the people’s lives.
On April 24, 1915, the Armenian genocide formally began. The government arrested and summarily executed several 235 Armenian leaders. Since they didn’t have gas chambers, they used a simple method of mass murder. They forced Armenians on death marches through the Mesopotamian desert without food or water. Marchers were stripped naked and forced to walk under the blistering sun until they died. If they stopped walking they were shot dead. Muslim families moved into the Armenian homes and seized their properties.

The Young Turks also created what they termed a “Special Organization” made up of murderers and other violent convicts. One Turkish officer later said they were “butcher battalions” for the purpose of “the liquidation of Christian elements.” They burned people alive, drowned them and threw them off high places. The countryside was literally strewn with the dead bodies of Armenians.

Government records show that these “Turkification” squads kidnapped children, forced them to convert to Islam, and gave them to Muslim families. They also raped Christian women, enslaved them or forced them into harems. If that sounds familiar, it’s because Muslims are doing the same things today in parts of Africa and the Middle East.
After the Ottomans surrendered in 1918 the Young Turks fled to Germany, where they were promised immunity from prosecution for the genocide. Since then the Turkish government has adamantly refused to acknowledge the genocide that took place. They claim the innocent civilian Armenians were an “enemy force” and their slaughter was necessary.

Most of the civilized nations of the world have publicly recognized the Armenian Genocide, and 20 major nations, along with Armenians worldwide honor the dead on April 24th. But the US - home to the second-largest Armenian community outside of Armenia– refuses to do so. Because Turkey is an ally, our cowardly US government has stayed silent. 2015 was the 100th anniversary of the Genocide, yet our nation still allows politics to trump truth in this matter. It is shameful.

There has been some progress. In 2004 the New York Times for the first time used the word “Genocide” regarding Armenia. And in 2010 a Congressional panel recognized the truth. But that is not the same as the government doing so.

I understand our government’s resistance to dealing with this. Turkey has, after all, been a fairly reliable ally in the Middle East. But they will not break relations with the US if we recognize the truth. They need our military assistance and support too much. The US has condemned the Nazi Genocide of the Jews, but that nation is still one of our closest allies.

And, as important as truth is, it’s not only a matter of recognizing it. US Senator Robert Dold, who introduced a resolution by which the US would have recognized the Armenian Genocide, has said, “It’s not just an obligation to the Armenians, it’s an obligation to mankind.” He believes the purpose of federal recognition is to create an official framework to prevent such atrocities from ever happening again. He quotes Adolf Hitler, who when he briefed his generals before the 1939 invasion of Poland said, “Who, after all, speaks today of the annihilation of the Armenians?” Dodd continued, “If we really want to believe ‘never again,’ we first have to recognize what’s gone on.”

Remember “granny”? The Armenian Holocaust has never really ended. She and other Armenians must defend their homes because they are still persecuted and murdered by Muslims today. US recognition of the terrible events of 100 years ago will not stop all of that. But if America joined the other civilized nations of the world in condemning this Genocide, it would put the Muslims on notice that we stand with all persecuted people.

Armenia and Azerbaijan: The War You Aren’t Hearing About — and Why You Should Care
http://www.therebel.media/armenia_and_azerbaijan_the_war_you_aren_t_hearing_about

Here’s Why the US Won’t Recognize the Armenian Genocide
http://www.defenseone.com/politics/2015/04/heres-why-us-wont-recognize-armenian-genocide/109864/