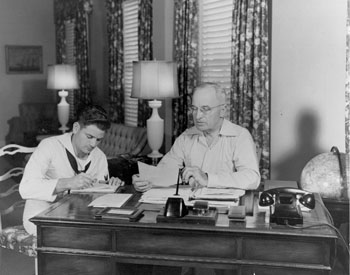 Don’t get your hopes up. We’re not talking about the demise of the Democratic Party. (Although if they keep going the way they are now, that might not be too far in the future.) I believe I have discovered evidence concerning the last Democrat ever to read the Constitution of the United States of America. This could be an important historical find!

While in Key West on a recent Caribbean cruise with my wife and daughter, we took a very interesting tour of Harry Truman’s “Little White House.” If you ever visit Key West, I recommend you take this one-hour tour. I think you will find it as interesting as we did.

A little history: The house was built in 1890 as part of a U.S. Navy base that was key to our naval efforts in the Spanish-American War. The two-story building that eventually became the “Little White House” was originally built as an 8,700 square foot home for the base commander and the paymaster. They must have had big families, because it’s a big house! Thomas Edison was asked by the U.S. Navy to help with weapons development during World War I. For security reasons, he was moved into the building because it was inside a secure naval installation. While he lived there he conducted thousands of experiments and developed 41 weapons for the war effort.

In 1946 Harry S. Truman visited Key West for the first time at his physician’s urging. The stress of his duties was wearing on the President, and his doctor recommended both rest and a change of scenery and climate. Key West seemed to fit the bill. Truman, who seemed liked a nice man, was pleased that there was no base commander at that time, because he didn’t want to pull rank and make someone move out of his home to make room for him. Truman liked the long walks in the sea air, the fishing, and the relaxed Key West way of living so much that his one-time visit became a tradition. He visited so often that the retreat became known as his Little White House. He came down every winter to escape the damp, cold weather in D.C., and as often as he could at other times for short retreats and official business.

Although he enjoyed some well-deserved relaxation in Key West, it wasn’t all fishing, card games, and drinking with the old friends who accompanied him. They didn’t call it the Little White House for nothing. A lot of important business was transacted there. His wife, Bess, usually did not accompany him on his vacations to Key West, saying he would relax with his buddies more if she weren’t present. However, he ultimately confessed to his family in a letter that he signed between 200 and 600 official documents each day while he was on “vacation.”

While in residence at Key West, President Truman held talks on the Marshall Plan to rebuild Europe, the Truman Doctrine that changed American foreign policy, and the recognition of the State of Israel. Perhaps the most important decision made at the Little White House was made in 1948 (the year I was born) when the Joint Chiefs of Staff flew down to create the Department of Defense by merging the Department of War and Department of the Navy. Altogether six presidents have used the Little White House as a retreat or a meeting place, but only Harry Truman made it his home.

Today the building has been restored to the way it looked when Truman lived in it, with mostly original furniture and accessories, and it has become a “living museum.” Unlike most museums I have visited, where you can look into roped-off rooms, at the Little White House you can walk into the rooms and touch the items in them. (They ask visitors not to sit on the furniture, so that it will last for future generations.) We toured the family living and dining rooms. We walked through the bedroom Bess Truman shared with her daughter Margaret (who is now a famous novelist) on the rare occasions when they visited. And we stood in Harry Truman’s bedroom, saw his famous hat on a chair, and looked at his desk.

That was where I made a shocking discovery. Harry Truman, a Democrat, had a copy of the Constitution on his desk. I asked our tour guide (a very sweet, knowledgeable, and funny lady named Audie) about this. She said that he read the Constitution every day.

Friends, this is an amazing discovery. Totally by chance, only because our cruise ship happened to stop for a few hours in Key West, I may have discovered the last Democrat to read the Constitution! As encouraging as that was, and as nice a man as the tour guide made Truman out to be, the tour ended on a sour note. The inevitable gift shop that one must pass through at the end of every tour in the world was filled with the usual tourist junk, albeit with a patriotic flavor. As you might expect, there were lots and lots of books by presidents, dead and alive.

What I didn’t expect was such extreme partisanship on a government installation still under the purview of the U.S. Secret Service. Out of three shelves full of presidential books prominently displayed with their covers facing out, all were by Liberals, except one. There was one book by Ronald Reagan – on the bottom shelf. Hillary Clinton, who has never been president (and Lord willing, never will be), had a book displayed on the top shelf, next to several written by the current Socialist-in-Chief. There was not one book to be seen by our most recent former President, George W. Bush, nor any by his father, although there were several by Billy Bob Clinton.

What is wrong with this picture? A current president who has done nothing but run our country more deeply in debt that any President in history is honored in this bookshop along with Clinton, the most immoral President ever to disgrace the White House. Clinton’s wife’s book is on the top shelf with the Presidents. Then the most popular and effective President of the last century, a man both Democrats and Republicans compare themselves to because of his integrity, has one book (out of the 35 he has written) on display. And it’s hidden away on the bottom shelf!

Finally, George W. Bush and George H.W. Bush have each written seven books, but the Liberals who run this bookshop have censored them totally. Not one book by either of these honored and honorable men, both of whom served our nation in its armed forces, is visible. But books by draft-dodger Bill Clinton and America-basher Obama are everywhere. I plan to send a copy of this article to the bookstore to help them understand the concept of bi-partisanship. While I was there, I helped them out in a more practical way. I swapped Hillary’s book for Ronnie’s. Ronald Reagan is now on the top shelf, where he belongs.