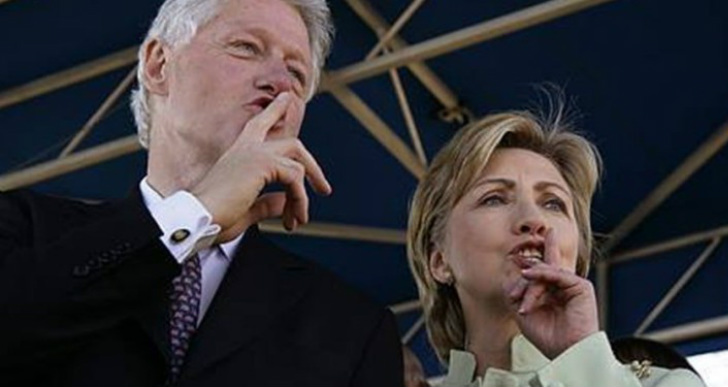 As you will see documented below, Bill and Hillary despise almost everyone: Catholics, Evangelicals, Jews, Latinos, southerners, blacks, workers & millennials.

Who's left? Who do Hillary & Bill like or respect? Well, obviously they like people like themselves - rich political elites. And of course, they love the fat cat Wall Street bankers who give them millions of dollars. And let's not forget the radical Muslim nations that oppress women and finance world terrorism - who also gave the Clintons millions of dollars.

So Hillary and Slick Willie have nothing but contempt for 95% of Americans - including most Democrats. How do we know this? By listening to their own words.

As you consider this, remember that Hillary needs these people if she is to win the White House. So why do she and Bill say such terrible things about potential voters? Because they think we are too stupid to put it all together. They think we're too dumb to realize that their opinion of us is so low.

Then Hillary - who is desperately trying to win over Bernie Sanders supporters - was caught on tape insulting them by calling them basement dwellers. In one of the speeches to Wall Street insiders that she worked so frantically to keep secret, she discussed the Millennials who make up a huge part of Sanders' base. She basically called them losers who live in their parents' basements, and referred to them on tape as “self-righteous whiners.”

At the start of her campaign Hillary’s campaign manager, John Podesta wrote an email directly to Hillary with the subject line, “Needy Latinos and 1 easy call.” He suggested that she call two Hispanic Democrats, Bill Richardson and Federico Pena to ask for support. Hillary did not chastise Podesta for his offensive “needy Latinos” remark. It’s doubtful that they would have taken her call had they known the way her campaign was talking about Hispanics privately.

Next, Bill got into the act. He spoke disparagingly about Southerners who support Trump - calling them Rednecks. Then he put down some of the hardest working people in the nation as "those coal people". He said the majority of Trump's supporters are people like he was before he became a rich elite – “Southern Rednecks." And he mocked "the coal people" of West Virginia and Kentucky. He has also been heard calling Jesse Jackson and other blacks the “N” word when he was angry with them.

Hillary is well-known for her foul mouth, which she used against Bill, the White House Staff and even the Secret Service agents who protected her. Several former Secret Service agents have documented her abuse. And L.D. Brown, a member of Clinton's former security staff and bodyguard in Arkansas, stated that Hillary is "as foul-mouthed as any sailor you'd ever meet." Now a new book by Jerry Oppenheimer recounts Hillary calling her husband’s campaign manager Paul Fray a “f**king Jew bas**rd.” The author has interviewed three credible witnesses who witnessed her rant, and says this is not the only time she has used anti-Semitic slurs, often referring to Jewish people as “kikes”. Her contempt for Jews is not surprising considering her hostility toward Israel and her efforts to undermine US support for our only ally in the Middle East.

Not surprisingly the press has protected Hillary when her racist filth was reported. On July 18, 2000 Newsweek Magazine reported that as early as 1999 Arkansas newspapers knew of a number of these incidents; but their editors decided to hide the truth from their readers. Likewise, Paul Fray’s wife told NBC’s Andrea Mitchell on camera about Hillary’s anti-Semitic rage against her husband. But NBC’s editors killed the story.

Finally, Hillary’s top staffers have insulted both Catholics and evangelicals.  Granted, these were not Hillary’s words. She claims to be a Methodist but never goes to church (except for political events). And she stated at a campaign event that she was not sure “that being a Christian is the only way to salvation” (which is a contradiction of both Jesus’s words and Methodist doctrine). But this is not about her faith (or lack thereof). It’s about the people she has chosen as her top advisors. Surely, if they speak for her she shares their views.

Podesta assured him the campaign already had it in motion.

“We created Catholics in Alliance for the Common Good to organize for a moment like this. But I think it lacks the leadership to do so now. Likewise Catholics United. Like most Spring movements, I think this one will have to be bottom up.”

These mocking insults to Christians were revealed when emails to and from Hillary’s Campaign Manager, John Podesta, were leaked. These emails contain many damaging facts concerning Hillary and her campaign. Podesta hasn’t denied that they are true. He just stated that he doesn’t have the time to review them and determine whether they were sent by him and to him. If I were accused of some of the terrible things that are in emails attributed to me, I would certainly look at them and prove they were false (if that were the case). We can only assume that they are accurate since he refuses to refute them. (He apparently learned from Bill Clinton’s mistakes and doesn’t want to perjure himself.

In another attempt to distract attention from his emails, he claimed that the Russians had hacked his emails to hurt Hillary and help Trump; and that the FBI had verified this. Not so. The White House Press Secretary stated that he cannot tie the Podesta hack to Russia. The FBI suspects that a Russian hacker may have hacked the Democrat National Committee, revealing that the DNC had sided with Hillary against Bernie Sanders. But they have made no such pronouncement regarding Podesta. And why would the Russian government want to hurt Hillary, when her politics are almost as Socialist as Putin’s, and she has promised to weaken our military? Likewise, why would Russia want to help Trump, who has promised to build up our military, and is the only patriot in the race?

In any case, however, the emails got out, there is no question of their veracity. In short, the email chain that has caused so much concern was among Clinton Communications Director Jennifer Palmieri, Clinton Campaign Chairman John Podesta, and John Halpin from the Liberal Center for American Progress. Halpin describes Catholics as engaging in an "amazing bastardization of the faith." He also criticized Rupert Murdoch, CEO of Fox News, and NewsCorp Chairman Robert Thomson for raising their children Catholic. And he mocked Murdoch for having his children baptized in the River Jordan. "They must be attracted to the systematic thought and severely backward gender relations."

Podesta, who was copied on the emails to and from Palmieri did not directly respond to the insults. If he disagreed with them (as any decent person would), he should have rebuked Palmieri, whom he supervises. Palmieri’s reply concerning the two Conservative newsmen: "I imagine they think it is the most socially acceptable, politically conservative religion - their rich friends wouldn't understand if they became evangelicals!" This is only part of the email correspondence, but it certainly gives us a clear picture of the Clinton campaign's disdain for the faith and religious practices of Christians. She is always quick to jump to the defense of any perceived slight towards Muslims, but when he own staff mocks Christians she is silent.

The Clinton scandals don’t stop there. Leaked speeches that she gave to foreigners and investment bankers are equally frightening to freedom-loving Americans. She told rich Brazilians that she “dreams” of open borders and completely free trade, both of which would hurt American workers and businesses. She told Wall Street insiders that they should be allowed to regulate themselves – far from her public position in which she condemns the “evil money people.”

She told Canadian Bankers (who paid her $1.6 Million for 8 speeches) what they wanted to hear - that she wanted the Keystone pipeline built. But her public stance is that Keystone would destroy the environment. Despite claiming that she and Bill were “dead broke” when they left the White House, she admitted to employees of Goldman-Black Rock that she is “kind of far removed” from the struggles of middle-class Americans because of the “fortunes that my husband and I now enjoy.”

You may find it confusing that she tells one tale to the audiences who pay her hundreds of thousands to hear her speeches, and has an entirely different tale that she tells the public. If so, Hillary explained this seeming anomaly to the National Multi-Housing Council. She explained that Americans aren’t smart enough to understand the complexities of public life, so she needs “both a public and a private position on the issues.” It’s no wonder that the great majority of Americans in both parties say that she is dishonest and that they don’t trust her.

With all the damaging revelations from her campaign’s emails and the text of her millions of dollars’ worth of speeches being released, it’s no wonder that her campaign decided to release Trump’s tape to try to change the conversation.