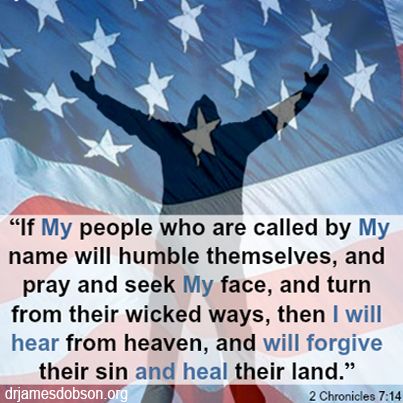 25 million Christian registered voters failed to do their civic duty when they did not vote in the 2012 election. Obama won by a mere 5 million votes. Contrary to popular perception, he did not win in a popular vote landslide; he received 51% of the popular vote. If just 21% of the Christians who didn’t vote had voted for Romney, the last 8 years would have been very different for the church. Obama has persecuted the church, pushed through same-sex marriage via the liberal Supreme Court justices he appointed, and moved us closer to Sharia law and “international law” influencing US court decisions. And he has been the most bloodthirsty president in history in terms of promoting infanticide

More important in this election than the past is the future. The next president will nominate at least three Supreme Court Justices, and possibly as many as four. Consider this. Obama has appointed two extremely liberal Supreme Court Justices, Sonia Sotomayor and Elena Kagan. Had he never been elected, the vote on same-sex marriage would have been 6 to 3 – against.

Some time ago I received a phone call about an assignment God had given to a Christian patriot named Randy Kenworthy. I agreed to help with an amazing project – the largest prayer gathering for an election in our nation’s history. Here is how it came about in Randy’s own words…

“This may be the last time I have the honor of saying the Pledge of Allegiance without persecution.” The thought hit me while standing beside my wife beneath our nation’s flag at the Revive Us event.  Shortly after having this alarming thought, God distinctly directed me to launch a 5-night, nationwide prayer gathering via teleconference. God is calling us today to humble ourselves and pray to Him so He can heal our nation (2 Chronicles 7:14).

“This election isn't about political parties. It's about following the ultimate Commander in Chief and faithfully stewarding our country. Will you join us in the largest group prayer in our nation’s history? It will be held five nights in a row, thirty minutes per night - with the Holy Spirit directing our prayers. God is directly and immediately pleading with us to turn back to Him. As a large Christian voting bloc, we can do it.”

My good friend General Jerry Boykin and Pastor Dix Winston will lead us in a prayer-centered Webinar for each of the five nights leading up to Election Day. We will be crying out to God to intervene in the trajectory of our nation.

You can participate in two ways. You can gather your family and friends in your home each night to view the Webinar and pray with us. Or you can encourage your church to gather together and view the Webinar on the church’s big screen while hearing the leaders through the sound system. (If the church’s audio/visual team needs help setting this up, they can call our Tech Support team at 561-753-5998 – preferably the day before.)

The Webinar is the best way to participate so that you can see the teaching points and the Scriptures. But if you cannot be at a computer or are traveling, you can also call in. Dial (631) 992-3221 and use access code 255-545-837#. (If you are asked for an “audio pin”, just hit # again.)The prayer event will be held every night from Thursday, November 3 through Monday, November 7. We will start promptly at 9:00 PM Eastern Time (6:00 PM Pacific Time). Please log in early.

It is important that you register ahead of time if at all possible. You only need to register once for all five nights. Then you can use the same login information each night. To register now, CLICK HERE.

Why have we named this momentous event “Crying Out for America” rather than something like “Praying for America”? It’s because of James 5:16. All of us pray regularly, and that is good. But we are at a time when fervent prayer is needed if we are to see God’s deliverance in our land. “The earnest prayer of a righteous person has great power and produces wonderful results.” Join us in crying out to the only One Who can deliver us.