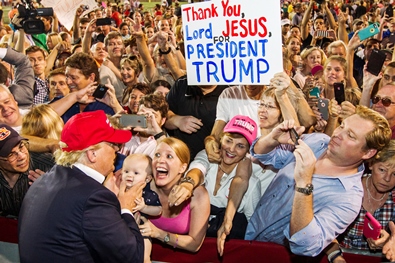 The last time I used that phrase was the day after 9-11. The attacks on the Pentagon and the Twin Towers changed forever the way America looked at the world. Even though we had suffered previous terror attacks, prior to 9-11 most Americans still believed that we were relatively safe in our own nation. This was the first time most Americans started to understand that Islam was the most serious threat facing our nation. We would never look at the world in the same way again.

Today changed the way the world looks at America. I am writing this on the morning of November 9, 2016. The world didn’t change on Election Day, November 8. It changed at 2:30 this morning when Hillary Clinton conceded her defeat. From that moment the world knew that there was a new Sheriff in town, and that his name was Donald Trump.

The closest comparison in recent times to the world seeing us differently was when Ronald Reagan was sworn in as president. 52 American diplomats and citizens were held hostage for 444 days by Iran. For over a year Iran had laughed at and humiliated Jimmy Carter. His presidency had been feckless and ineffectual in almost every way, but the hostage crisis showed the world more clearly than any of his previous actions and inactions that he was not a leader.

But just hours after Reagan was inaugurated Iran released all 52 Americans. They knew that he was a leader who said what he meant and meant what he said. They knew that if they tried to treat him the way they had treated Jimmy Carter, bombs would be raining in their heads in short order.

I think that hundreds of world leaders realized within the last few hours that everything has changed in regard to their relations with the U.S. They had fully expected that it would be business as usual, with another Clinton in change of “Obama, The Sequel.” Presidents and Prime Ministers had seen first-hand how easily Obama (and Hillary, when she was Secretary of State) could be bullied and manipulated.

Today many of them – particularly the despots and dictators – are shaking in their boots. For the first time since Reagan political correctness will no longer control America’s domestic and foreign policy. Trump is a man who calls a spade a spade – not an “agricultural implement.”

Don’t get me wrong. I know that Trump is not Superman. He doesn’t have X-Ray vision, and he can’t leap tall buildings in a single bound. He is not going to restore America to its former glory, eliminate the huge National Debt that Obama doubled, and command world peace by the strength of his will.

But one thing is certain. Today – not in 72 days when President-Elect Trump is sworn in – the governments of the world are already adjusting their stances with regards to the United States. They are re-thinking provocations that they could have gotten away with under Hillary. They are making changes to their unfair trade practices and their currency manipulation policies. They know our new Sheriff understands authority and power and will not be afraid to use it in a responsible way.

President Trump will make mistakes. He will say things that he will later wish he had not said. He will offend people. He will do all these things because he is human.

But, unlike our current president, he is a patriot. He loves America. I don’t know about you, but I can forgive a lot of mistakes if they are honest mistakes made by a patriot who has the best interests of our nation at heart.

Sit back and enjoy the ride. It is going to be very interesting to watch the Lord use this man to combat the moral decline of America, bring honesty back to government, and make America great again. Never forget for a moment that he could not, he would not, have been elected unless it was God’s will for America.