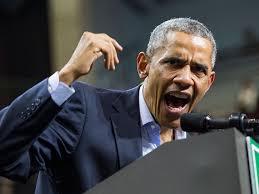 Talk about airing his dirty laundry in public! Most presidents in the past have had the brains (and class) to refrain from talking about our nation's domestic politics when visiting foreign countries. Not Barrack Hussein Obama. During his final apology tour, he held a press conference in Peru in which he threatened to publicly oppose Donald Trump's policies if he disagreed with them.

Originally Obama suggested once he was out of office he would uphold the tradition of ex-presidents staying quiet in their retirement. He praised President George W. Bush, saying he "could not have been more gracious to me when I came in," and promised he would give Trump the same chance to do his job "without somebody popping off" at every turn.

But in Peru Obama suggested the opposite to reporters. "As an American citizen who cares deeply about our country, if there are issues that have less to do with the specifics of some legislative proposal or battle or go to core questions about our values and ideals, and if I think that it's necessary or helpful for me to defend those ideals, I'll examine it when it comes."

When he talked about "our values and ideals" he was really talking about his legacy. Following Trump's stunning victory he spoke softly and carefully. After all, Trump holds Obama's legacy in his hands. In January he will have the "pen and phone" that Obama used to pass hundreds of unconstitutional executive actions and orders. And Trump will have the ability to rescind them.

Now that Trump has made it clear that he will keep his campaign promises to undo all of Obama's damage to the U.S. (including ObamaCare), Obama is becoming more frightened and bitter. And he is lashing out at Trump, as he did in Peru. I guess he thinks Trump will be frightened by the idea of a bitter ex-president criticizing his every move. But something tells me that Trump will just ignore the carping of this small man, and just do his job.