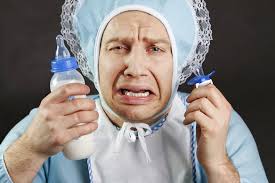 We expect Democrats to act like babies. But we have the right to expect elected Members of Congress to at least pretend to be adults. Unfortunately, 60 or so Democrat Senators and Congressmen decided to throw a mass temper tantrum. They have decided that Donald Trump is an "illegitimate president" and refused to attend his inauguration.

I say, "Great!" That will leave more tickets for patriotic Americans who want to celebrate something that is unusual in this world. The nation of Gambia is a good case in point. A month ago Gambia elected a new president. He is in hiding today, in fear for his life. The old president simply refuses to leave. These childish Democrats should be thanking God that they live in a country where that doesn't happen, and they should join the rest of us in rejoicing over a peaceful transition. But, no, they must have their tantrums and throw around baseless allegations.

Now, I'm on the Trump train, but I'm not on the Trump team. So nothing I say here reflects the views of Mr. Trump or any of him team (at least, as far as I know). But this is how I would handle these whining babies if I were Mr. Trump.

Whenever one of these boycotting Democrats contacts the White House and asks for a meeting with him or one of his staff, for help on a bill, for an invitation to a state dinner, or even for tickets to the White House Easter egg hunt, he should have the lowest ranked person in the secretarial pool give them this message (please use this exact wording):

"I'm sorry. Since you do not believe I am a legitimate president, perhaps you should ask whoever you believe is legitimate to do you this favor. Should you have trouble with your request I suggest that you contact me later - perhaps in eight years. By that time I will no long be an "illegitimate president", and will have time to show you the courtesy and respect you refused to extend, not to me, but to the Office of the Presidency."