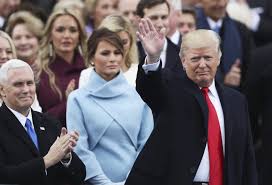 I have to say that I am surprised. I was expecting a good speech, perhaps a great speech. But I was floored by what I heard President Trump say today. Not because it contained soaring rhetoric. Not because of his oratorical skill. Not because he was eloquent. But because of the content of the speech. He spoke to the heart and soul of America today. He told Americans, not what they wanted to hear, but what they needed to hear.

I believe America is far more hopeful and positive about the future than we were just a few hours ago.

First, it was so refreshing that I hear the word "I" only three times in his speech (I checked the text to be sure). And even in those times he was not talking about himself, but saying, "I promise..." Think of the dozens and dozens of times the narcissistic Obama used the words "I', "me" and "my” in his State of the Union speeches and his recent farewell speech.

Second, themes of God's protection and of patriotism have resounded over the last two days. Lee Greenwood sang, "I'm Proud to be an American," and Toby Keith sang "American Soldier" - a song honoring America's military men and women and one about being proud of America. You would never have seen anything like that at an Obama event.

Also, there were more prayers offered for our nation and its new leadership than at any inauguration in history. And the ministers that wanted to pray "in the Name of Jesus" were even allowed to do so. President Trump quoted Scripture and spoke often of God in his speech. He even made it clear that only God can protect America. The only mention of God in any Obama speech I've heard was a grudging "God bless America" at the end.

I will be publishing the entire text of President Trump's speech on www.ConservativeTruth.org Monday. Read it, perhaps several times.

The contrasts are fascinating. Without mentioning any names, he made it clear that the days of Obama, the Democrats, and many even Republicans enriching themselves at the expense of Americans are over. No longer will the government rule over the people. The people will rule the government. Without a doubt, there's a new sheriff in town, and government employees are going to either shape up or get in line at the unemployment office.

Obama never did anything effective against Islamic terrorists. He was afraid to even mention their name. He called them "extremists" (extremists are people who get in fights over which football team is best) and said he would "degrade" them or "contain" them. Trump said he was going to DESTROY Islamic Terrorists. And you know what? I think he will.

Most important, he said that he would give the government back to the people. Obama believed that the government knew what was best for the people; we weren't smart enough to determine our own destiny. Mr. Trump said what the Bible and the Constitution say: That people are designed to be free, not robots controlled by the government. From now on the "forgotten people" (including the ones that the Democrats despise so much who live in "flyover country") will be in charge.

That speech was the happiest moment I've had since the Lord healed my wife the first of this year. The second happiest was when Obama got into a helicopter and flew out of Washington, DC. I will treasure that moment for years to come.