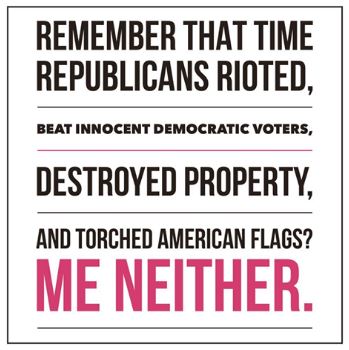 Ben Carson posted this graphic, and I was taken by it. When was the last time you heard of a Republican riot? Never!
Why is it that so many Democrats riot, destroy property, beat people unmercifully when they disagree with them, burn our beloved flag, attack our police and military personnel, and use hateful, incendiary language (such as "racist") almost as a reflex when speaking of Republicans and our new president?
I'm not saying that all Democrats do these things. But so many do. And those who don't refuse to speak out against the rioters and haters. It reminds me of people saying "not all Muslims are violent." True, but why don't the "moderate" Muslims and their clerics have the courage to speak out against the ones who make it appear that the entire religion is hateful and violent?
Democrats need to take note of this and realize that more and more Americans view their party as violent, hateful, and divisive. They need to remove the many unpatriotic, un-American politicians in their party. And they need to speak out strongly against the members who are destroying their party by giving it such an ugly public image.
Copyright ©2017
Read more by Dr. Tom Barrett
Tweet