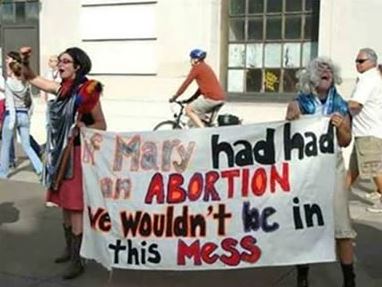 The so-called "Women's March" in Washington, DC the day after the Inauguration was very selective. Pro-life women were not allowed to participate or speak on the stage. But Pro-Death women, and even men dressed up as women, were welcome.

This banner is just one of the many disgusting, blasphemous signs carried by these women: "If Mary had had an abortion, we wouldn't be in this mess." My answer to them is, "If you weren't promiscuous, you wouldn't need an abortion." Or, "If you're going to sleep around, don't use abortion as birth control. Buy some condoms."

What kind of sick, twisted people think it is amusing to insult God and His Son Jesus who came into this world to save them? Are they demented? Have they fried their brains on illegal drugs? Or have they turned their souls over to Satan?

Muslims would call for these women to be put to death if they had insulted their so-called prophet. As Christians, we will pray for them, and ask God to lead them to His truth.

But I sure wish the news media would stop promoting this kind of blasphemy. A few days later decent women and men held the annual March for Life in Washington, DC. Although the number of people involved in both events was comparable, the mainstream media basically ignored the Pro-Life people. In fact, according to the Media Research Center, the major TV networks gave 129 times for coverage to the Pro-Death crowd as they gave to the March for Life.

It's about time that Christians start letting the news media know that if they continue to promote a culture of death in our nation, we will stop watching and reading them, and will stop patronizing their advertisers. And we should send the same message to the advertisers themselves.