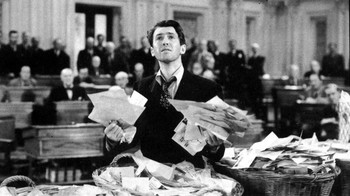 The Democrats have their knickers in a wad because Republicans used the “Nuclear Option” to take away their power to “filibuster” President Trump’s Supreme Court nominee. The only problem with this Democrat hypocrisy is that they had already gone “Nuclear” themselves in 2013 – for all nominees except the Supreme Court.

So, just what is a “filibuster”? Most Americans know it simply as a stalling tactic in which Senators embarrass themselves (and the nation) by standing for hours reading from the telephone book or reciting poetry. Most Americans don’t know how expensive a filibuster is: $578,000 per day.

(Cost calculations: It costs the United States $804,247,090 in 2013 for legislative salaries, office expenses, and staff salaries. This does not include health insurance and other expensive perks for members, nor the cost of their buildings and maintenance of them. The cost today is probably much greater. Divide the $804 Million by 139, the average number of “legislative days” each year, and the cost for every day a filibuster is in progress is $578,417.)

The definition of a Filibuster is:
a) The use of irregular or obstructive tactics by a member of a legislative assembly to prevent the adoption of a measure generally favored or to force a decision against the will of the majority.
b) An exceptionally long speech, as one lasting for a day or days, or a series of such speeches  to accomplish this purpose.

The name is derived from the French 18th century “filibustier” and the 19th century Spanish “filibustero”. Both refer to pirates, which is appropriate. The filibuster is used to pirate – or steal – from the majority the right to vote on a measure that everyone knows will pass a simple majority. The hope of those who employ it is to delay – for days, weeks or even months – the passage of a bill or the approval of a nomination. The other purpose is to force some type of compromise so that the legislature can get back to doing the people’s business.

The filibuster has cost our nation billions of dollars over the years in lost productivity. Some would argue that when Senators are reading from Shakespeare or children’s books they are actually doing the nation a service. While so engaged they are not passing legislation that could be harmful to the nation. That may be so, but the fact remains that while they are deliberately wasting time, they are not doing the job we pay them to do.

Imagine an employee where you work who, to put off listening to an instruction from his supervisor, talked non-stop for hours or days to prevent his boss from speaking. How long would the boss put up with such nonsense before firing him? Yet these Senators work for us, and we keep re-hiring them election after election. Who is the greater fool? The fool who stands for hours spouting nonsense to obstruct the Senate? Or the fools who re-elect them?

The ability to change the rules by which our nation is governed by the leader of the party in power for purely political purposes is no way to run a great nation. Too much power in the hands of a few is a recipe for disaster. The Democrat leadership changed the rule on filibusters in 2013 to outlaw filibusters in the case of nominations for lower court judges and executive appointments. But they left the filibuster in place for Supreme Court Justices. They did this because it was to their political advantage at that time. This week the Republicans changed the rule to prevent filibusters for Supreme Court Justices – for their party’s political advantage.

Don’t get me wrong. I am happy that Judge Gorsuch’s nomination was approved. But the way it was approved was that the Senate leaders knew they didn’t have enough votes to stop a filibuster (by passing a resolution for “cloture”, which means ending the debate). So the Republicans changed the rules.

The hypocrisy is that for almost a year the Republicans blocked Obama’s choice for the seat Gorsuch just took. The further hypocrisy is that the Democrats are crying “Foul!” when they were using the threat of a filibuster to block Trump’s pick.

Neither party’s hands are clean with respect to the filibuster. Each uses it for purely political reasons when it is to their advantage, and each says that the other party is “stifling debate” when they do the same. Both parties have changed the rules to limit the use of the filibuster when it helped them, and both have cried that the other party is ruining the Senate when they do the same thing.

The bottom line is that the filibuster should be permanently ended, not just for nominations, but for all deliberations. And it should be ended by a law passed by both houses, not just another rule change. We’ve all seen how quickly rules can be changed – and changed back – for political advantage.

There is absolutely no justification for the ridiculous spectacle presented by the filibuster in the Constitution. It makes no sense to the average citizen, and it opens us up for ridicule by other nations. Other than the electoral votes and the vote to override a presidential veto, the Constitution prescribes no other type of vote for any bill or resolution other than a simple majority vote.

In the case of electoral vote for the office of the president and vice-president (Article II, Section 1) a simple majority is used, but there are special rules for cases in which no candidate receives a majority. In the case of the two houses overriding a presidential veto, the Constitution (in Article I, Section 7) prescribes a two-thirds vote of each house to override. This makes sense, because it is a serious matter when the Legislative and the Executive branches disagree, and the Founders made sure that there would be a serious commitment on the part of both houses to stand behind the law in question.

Other than that, the only direction we find in the Constitution is in Article I, Section 3: “…each Senator shall have one vote.”

The Senate has added a strange rule of voting, Rule XXII, to that prescribed by the Constitution. This allows the filibuster and a vote to end it called “cloture.” It is very complicated and convoluted. If you want to try to decipher it, I have included a link below.

Senate rules allow for “unlimited debate.” In the early days of Congress, the House of Representatives also allowed the filibuster, but they quickly realized that a room full of blowhards talking for as long as they wished meant nothing would get done. They abolished it. But the Senate still desperately clings to their cherished “right to unlimited debate” as if it were one of the Ten Commandments. Unfortunately for them (and their credibility as a deliberative body) there is no precedent or justification for it in the Constitution.

Their idea of unlimited debate is often no debate at all. It is simply people talking. Once the actual debating has been done, if the opposition party wants to obstruct the Senate and hold it hostage, all they have to do is talk. As long as a member is talking it is considered “debate” – even though it is often just nonsense.

Most us have seen the old movie “Mr. Smith Goes to Washington.” In it Senator Jefferson Smith (played by Jimmy Stewart) conducts a very long filibuster. Unfortunately, such antics are not just fictional. Recently Republican Senator Ted Cruz conducted a 21-hour filibuster with the goal of defunding ObamaCare. Unusual for filibusters, he actually spoke about the subject for most of the time.

In the 1930’s a colorful Democrat Senator named Huey Long (who called himself The Kingfish) held the Senate floor for 15 hours entertaining the folks by reading recipes for various foods including something called “pot-likkers”. Democrat Robert Byrd conducted a 14 hour and 13-minute filibuster against the Civil Rights Act of 1964. But the record for the longest speech is held by Democrat Strom Thurmond – 24 hours and 18 minutes. Amazingly, since the Democrats are supposedly all about civil rights, he filibustered to prevent the passage of the Civil Rights Act of 1957. The Democrats were really against civil rights. The longest combined filibuster (in which many Senators tag-teamed one another) consumed 57 days of the people’s time between March 26 and June 19, 1957 – the day the Civil Rights Act passed.

Cloture, the other part of Rule XXII, is used when enough Senators get sick and tired of the circus of the filibuster, and vote to cut off debate. The thing that makes the filibuster and the cloture motion so dangerous is that they effectively changed the constitutionally prescribed simple majority to pass a motion to a “super majority” of 60. Rule XXII requires a 3/5 vote of the Senate to end “debate” – which is actually to end the filibuster.

The dangerous aspect of this is that, while maintaining the actual constitutional threshold of 51 votes to pass a bill or other motion, the real threshold is 60, since a small number of Senators can hold the entire Senate hostage by keeping it from voting. This can go literally for months. A 57-day filibuster such as the one in 1957, would cost the United States $33 Million dollars if it were done today.

The other danger is that it works against the possibility of bipartisanship. If the Senate followed the lead of the House and followed the constitutional prescription of a simple majority vote, Senators would have to work harder to bring members of the opposition over to their way of thinking. As it is, a few malcontents can hold everything up, either out of principle or spite. Eventually, almost every vote that is filibustered passes – so why waste the time and money? Why not – shocking thought! – do something constructive?

Why have I spent so much time discussing a subject that is essentially already decided? The filibuster for presidential appointments is dead and gone – until one or the other party reinstates it. The problem is that appointments get most of the attention, so filibusters for other reasons aren’t well known.

The fact is that every Senate deliberation, whether for an important bill to fund the military or one to name a public building, is always under the threat of a filibuster. Let’s get rid of this arcane – and frankly bizarre – rule once and for all. Write to your Senators (use the link below to contact them) and insist that they revoke Rule XXII and then enshrine the death of the filibuster in law.

Remember, they work for you.

Wikipedia on the Filibuster
https://en.wikipedia.org/wiki/Filibuster_in_the_United_States_Senate

3 Charts Explain Why Democrats Went Nuclear on the Filibuster
http://www.motherjones.com/kevin-drum/2013/11/charts-explain-why-democrats-went-nuclear-filibuster

How Many Days Does Congress Work Each Year?
https://www.thoughtco.com/average-number-of-legislative-days-3368250

Rule XXII of the US Senate
http://www.rules.senate.gov/public/index.cfm?p=RuleXXII