This week a former Bernie Sanders campaign staffer attempted to murder the Senate Majority Whip, Steve Scalise, at a baseball practice. He wounded Scalise and two police officers severely. He was able to get off 60 rounds before the police killed him. The Liberal media want to write him off as a random crazy guy because of the Sanders connection. But there’s more to the story.

The gunman was part of a Facebook Group – “Terminate the Republicans.” The group of 13,000 haters celebrated the shooting of the Congressman by member James Hodgkinson after the news came out. Of course, the organizer of the group posted a statement that the group does not condone violence. The group also very quickly removed all posts by the attempted murderer, as well as some of the other more violent posts that probably contributed to the gunman’s actions.

(By the way, Facebook has censored or closed the accounts of numerous of Christians, Conservatives, and Republicans simply for expressing patriotic or Conservative ideals. But the “Terminate the Republicans” account is still up and spouting its violent rhetoric.)

Lest you think this was a random shooting, Hodgkinson approached another Congressman who left the practice early that day. He asked, “Are these people Democrats or Republicans?” After being told that they were Republicans, he proceeded to try to murder all of them.

Within hours of the shooting Sanders rushed to the floor of the Senate to condemn it and claim that he was against all violence. Really, Bernie? Then why do you make statements like this: “As Republicans try to repeal the Affordable Care Act, they should be reminded every day that 36,000 people will die yearly as a result.” Any of your zombie followers who believe your lies might consider it a reasonable action to kill Republicans because he could help save 36,000 lives.

Other Democrats make equally violence-inciting statements every day. Hakeem Jeffries made this totally unsubstantiated statement on the floor of the House: “We know that every racist in America voted for Trump.” Wouldn’t it be reasonable for other Blacks who heard this elected official make such a stupid, outrageous statement to think it would be OK to kill the President since he was supposedly supported by “every racist in America?” (Note to Hakeem: Millions of Blacks voted for the President. Are they all racists?)

Another Democrat Congressman, Gerry Connolly, compared Trump to Hitler. “Maybe his enablers will rouse themselves when the Brownshirts come for them.” Wait a minute. If he is right, wouldn’t it make sense for some of the more stupid Democrats to justify killing the President or members of his party? After all, Hitler killed 6 Million Jews. Getting rid of Trump could save millions of lives (in the thinking of warped Liberals who listen to idiots like this Congressman).

Many Democrats have also supported Cathy Griffin holding the apparent severed head of our President dripping blood as “freedom of speech.” Her stunt traumatized the president’s 11-year-old son who thought that “something terrible” had happened to his father. Democrat Mayor Bill DeBlasio has defended the Shakespeare in the Park version of “Julius Caesar” in which a Donald Trump look-alike is brutally beaten and stabbed to death with blood all over the place. He calls it culture. He would have called it an outrage if it had depicted Obama in the same way.

Which brings me to an important point. Members of Congress do not receive protective details unless they are in the Leadership. If Scalise had not been there, neither would the two Capitol Police Officers, and dozens might have died. One Congresswoman received an email shortly after the attack, titled, “One Down, 246 To Go” (referring to the number of Republicans in the House.) Many Congressman have stated that they want to carry personal firearms, but Washington, DC law does not permit this – even for those who are direct targets of the lunatic Left.

Likewise, in the recent Westminster, England killings, in which 5 died and many more injured, it was the bodyguard of the Defense Secretary who killed the terrorist. Because of the ridiculous English laws that require police to face armed attackers with nothing but a billy stick, there were only two unarmed police protecting the open gates of the Parliament courtyard.

One of the unarmed officers bravely faced down the Muslim terrorist who had two large knives, and died from multiple stab wounds. There are very few armed police in England, most of whom protect the rich and famous. Had it not been for the cabinet officer’s bodyguard, who was sitting in a car outside the gate, witnesses say that many more would have died. The armed response police arrived several minutes after the bodyguard killed the terrorist. If the police had been armed, it is likely no one would have died that day – except the attacker.

It’s great that the highest government officials here and in England receive armed protection. And, of course, the Hollywood stars who fight to take guns away from ordinary citizens, all have the highest-priced armed bodyguards money can buy. But what about us? Don’t we have the same right to be protected against those who would take our lives?

This is frightening. As of 2013, the average response time of police nationwide to 911 calls was 11 minutes. Most agree it has gotten steadily worse since them. More frightening is the fact that, according to the latest Federal Bureaus of Justice Statistics from 2008, police response times when violent crimes were reported ranged from 5 minutes to longer than one day.

Of course, this varies by city, from as little as eight minutes in Dallas to 58 minutes in Detroit. And there are many responses for the slow responses. Although Dallas has one of the best times, Ron Pinkston, president of the Dallas Police Association says it’s not good enough – and he blames officers’ fears for the delays…
“The motivation is a little lacking,” he said. “I think it’s just the fear of doing the right thing and that they are going to get disciplined for doing that.”
Pinkston said officers are too often being reprimanded for the way they drive during high speed chases or for the difficult decisions they have to make when using deadly force.
“The only way we are going to get this response time to turn around is get a different management style or get a different manager,” Pinkston said.

Other reasons include low manpower, the general negative attitude toward police (fostered in large part by Obama’s constant criticism of officers), traffic congestion, and budgetary constraints.

Whatever the reason, I am not criticizing the police. I used to be a deputy sheriff. I know from personal experience how hard the job is, and how hard these heroes work to keep us safe. I am just stating facts. And the facts are that if you are faced with an armed intruder in your home, the chances that the police will arrive in time to help you are extremely slim.

Wayne Ivey, Sheriff of Brevard County, Florida, says we can’t afford to wait for the attack. He says armed citizens are the first line of defenses, and he encourages citizens to arm themselves and get training in the proper use of their firearms. (See his VIDEO below.) 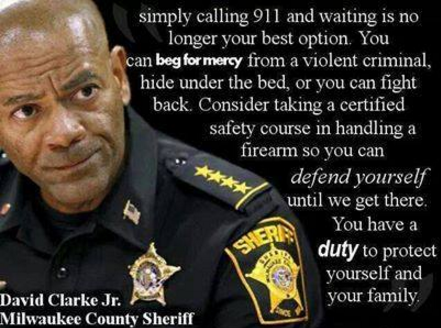 Sheriff David Clarke of Wisconsin agrees. He says, “Simply calling 911 and waiting is no longer your best option. You can beg for mercy from a violent criminal or hide under the bed; or you can fight back…Defend yourself until we get there. You have a duty to protect yourself and your family.”

I know many of you were raised to be frightened of guns. That’s just fear of the unknown. You can get over that. Have a friend who understands firearms help you choose the best one for your purposes. Then train, train, train. After you have fired several boxes of ammo, there will be no more fear.

You may think, “I couldn’t take another life – no matter what.” You are so wrong. If you watch your spouse or child die, and you live through it, you will not have another day as long as you live that you won’t regret your decision to be a sheep. Every time you think of your dead loved ones, you will wish you had done all you could to protect your family.

Decide today to be a lion. A lion will fight to the death to protect its cubs. Should you do less for the wonderful family God has given you?