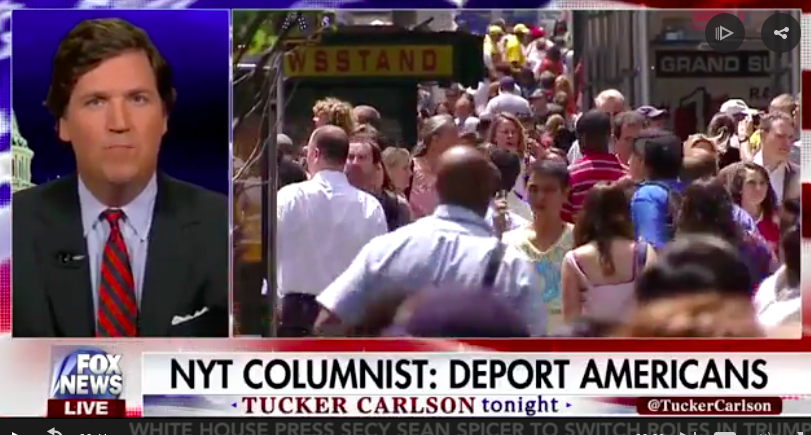 On June 16th NY Times columnist Bret Stephens published an article titled, “Only Mass Deportation Can Save America.” He wasn’t talking about deporting the millions of illegals that are sucking this nation dry. He believes Americans should be deported! I happened to be in NYC the day the piece was published to see my daughter Sarah perform at Carnegie Hall. If I had seen this article then, I would have gone to the NY Times building to give this jerk a piece of my mind.

He claims to be “conservative,” but he is either lying or doesn’t know what the word means. He tosses around the old lies about America being a nation of immigrants. According to the last census, 86% of Americans were born in – you guessed it – America. And he’s not talking about our roots. If you have the stomach to read his sophomoric piece, you will see that he states clearly that Americans who have been here for generations are the enemy.

After saying that too many people in America don’t work hard and don’t contribute much to society, he proclaimed, “They need to return whence they came.” (Don’t you just love it when Liberals use fancy words to make it appear that they are smart?)

He continues, “I speak of Americans whose families have been in this country for a few generations. Complacent, entitled and often shockingly ignorant on basic points of American law and history, they are the stagnant pool in which our national prospects risk drowning.”

Get it? You and I are the “stagnant pool” in which our nation’s future prospects of greatness are at risk of drowning. Shame on us! Of course, he doesn’t include himself in the pool. There’s no way a Liberal elitist would ever consider himself as anything other than wonderful, enlightened, and much, much smarter that the “deplorables” to whom he lectures from on high. He continues his ridiculous, self-serving recitation of statistics either false or twisted and misinterpreted to fit his false agenda with these encouraging words:

“Bottom line: So-called real Americans are screwing up America. Maybe they should leave, so that we can replace them with new and better ones: newcomers who are more appreciative of what the United States has to offer, more ambitious for themselves and their children, and more willing to sacrifice for the future.”

His conclusion: “Because I’m the child of immigrants and grew up abroad, I have always thought of the United States as a country that belongs first to its newcomers — the people who strain hardest to become a part of it because they realize that it’s precious; and who do the most to remake it so that our ideas, and our appeal, may stay fresh.”

Apparently, due to the fact that his parents were immigrants and he was raised abroad, he has a special, elevated status that allows him to trash the citizens of the country of which he is also a citizen. But his criticisms don’t apply to himself – after all, he was “raised abroad,” which obviously makes him superior to ordinary Americans.

He ends with this verbal vomit: “We’re a country of immigrants — by and for them, too. Americans who don’t get it should get out.”

So, to summarize his warped thinking: I wonder how he could conclude that immigrants (illegal and legal) are more appreciative of American ideals when so many of them don’t have a clue of what those ideals are. This certainly doesn’t apply to all immigrants, but it is a fact that millions of immigrants refuse to learn our language, understand nothing of our culture, and self-isolate themselves in ghettos where they preach hatred of America (and where, in many cases, police officers are afraid to enter). This is particularly true of Muslim immigrants.

After laying out in great detail exactly what he believes, he makes a lame attempt to let himself off the hook for his reverse racism against patriotic American citizens: “O.K., so I’m jesting about deporting ‘real Americans’ en masse. (Who would take them in, anyway?)" Following the outcry over his article, he even claimed (after the fact) that it wasn’t a serious article at all. It was a “satirical piece.” Read it yourself unless you get nauseated easily. In the article he clearly expresses his strongly held Liberal sentiments.

This guy and his newspaper (the “Failing New York Times” as the President likes to call it) are typical of the attempt of the ignorant Left’s attempts to sway public opinion in America. They are in equal parts defeated, demented, dejected and desperate after losing the White House, the Senate, the House of Representatives, many governorships and dozens of state legislative seats nationwide. They don’t know what to do. The Democrats have no leader and no strategy. Their only plan is to cry out from their dark pit that Republicans are racists, xenophobes, Islamophobes, and Nazis. (How’s that working for you Democrats, Liberals, and Socialists?)

And President Trump is right. By every measure, the New York Times is on a massive downhill slide. The paper itself, which used to weigh five pounds, is now the size of a small supermarket tabloid. Since 2012 it has laid off a third of its employees – almost 2,000 of them. Its subscription base has declined dramatically, along with newsstand and street sales. Most telling,  while the majority of US companies seeing their stocks reach all-time highs as a result of the “Trump bump,” the Time’s stock has dropped from $52 in 2002 to just $15 today.

The Times was once the greatest US newspaper. Today it’s on its death spiral toward bankruptcy. And it’s all due to publishing propaganda articles like the one described above, allowing its writers to publish lies without fact-checking them, and becoming the public relations arm of the Democrat party. When the paper finally goes under, it will have no one to blame but itself.

But of course, the Times and its proxies blame Trump. “That mean old President said nasty things about us, and he hurt our feelings.” They claim Trump is threatening “the free press.” They should look at their own history. There was a time when newspapers printed the news fairly and even-handedly. They didn’t take political sides. We had something that doesn’t exist today, a concept called journalistic integrity.

All that fell apart when newspapers started taking sides. The first time a newspaper endorsed a presidential candidate was in 1860. Other newspapers followed suit, and it has all been downhill since. Which newspaper started the politicization of journalism in 1860? The New York Times, of course.

When the Times goes bankrupt, wouldn't this be a delicious irony? Donald Trump could buy the building and create a museum that detailed the history of what a free press used to be. He could put in giant gold letters at the top: "The Trump Museum of Journalism."