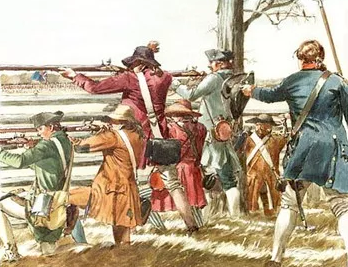 Let’s imagine for a moment that the Founders had been like today’s Liberals. Well, first of all, there probably would never have been a revolution, and we would be driving on the wrong side of the road today. Not only are Liberals against any kind of war, however just or necessary to our self-defense, they are strong proponents of the government controlling everything. Do you think they would have risen up against King George III for his totalitarian control of every aspect of life, when they try to pass laws every day to give the government more control of our lives?

Second, Liberals believe guns are evil. They actually believe that guns kill people. So when the British attacked them with guns, what would they have done? They would have run away and hidden like cowards. Or, if they managed to muster up a little spine, they would have thrown sticks and rocks at the Redcoats – because they don’t believe citizens should be allowed to have guns. Except for the rich Hollywood Liberals and the Liberal politicians. They love being protected by guys with guns. They just don’t believe you deserve the same protection.

If American citizens had not had guns and been willing to use them, we would be just another British colony. Every detail of your life would be structured by the English government. The type of clothes you could buy, whom you could do business with, the amount of money you could make, and – yes – even the type of health care you were allowed would have been controlled by the government. If you were allowed to vote at all, your only choices would be hand-picked stooges of the British.

Finally, if the Founders had been Liberals there would be no Independence Day. Citizens would not have had guns, and without guns, we would not have won our independence. There would be nothing to celebrate. Liberals just don’t get it. They wouldn’t have the right to start their own political party, to rant and rave against guns, or to try to take away fellow citizens' rights to own guns – if it weren’t for guns! If every household in America hadn’t had one or more guns (and known how to use them) we wouldn’t have had a chance against the most powerful, well-trained, and well-armed army in the world.

Do you know how Independence Day was celebrated in the early years of our nation? With guns. Everyone in those days knew that if they hadn’t had guns, and patriots that used them to resist the oppressive British rule, they would have been slaughtered.

John Adams, who would become our second president, wrote on July 3, 1776, that Independence Day “ought to be commemorated, as the Day of Deliverance by solemn Acts of Devotion to God Almighty. It ought to be solemnized with Pomp and Parade, with Shews, Games, Sports, Guns, Bells, Bonfires and Illuminations from one End of this Continent to the other from this Time forward forever more.”

Adams wasn’t shy about two important things: First, that without “God Almighty” providing the U.S. with this “Day of Deliverance” we would not have become a nation. Second, he believed that the day should be celebrated extravagantly – with, among other things, “Guns, Bells, Bonfires, and Illuminations.” Although some people still shoot guns in the air on Independence Day, this has been largely replaced with fireworks. After all, those bullets shot into the air tend to come back to earth, and could injure people. Plus, any Liberals in the crowd would have a panic attack if they saw a gun in use.

But the fireworks we use today remind us that guns in the hands of patriots saved us from being the slaves of another nation. We should be forever grateful for the brave men (and sometimes women) who defended their new nation, their states, their towns and their homes with guns. As the saying goes, you don’t bring a knife to a gunfight.

Would it be nice if no one had guns? Sure. No one would be shot. But that wouldn’t stop murders. We would also have to ban all knives, all chemicals that could be used as a poison, all hammers, all axes, baseball bats – you get the idea. We can’t even ban the use of the most formidable weapon the world has ever seen – nuclear bombs. If we can’t do that, how can we get guns out of the hands of every criminal in this nation of 320 Million?

The most violent city in our nation over the Fourth of July weekend was – you guessed it – Chicago. There were over 100 shootings and twelve murders. This was in spite of over 1,000 extra officers being deployed on the streets for those three days. Houston has almost exactly the same population as Chicago. But during the same three-day period in Houston, four people were shot in one incident, one critically. None died.

What was the difference? Chicago has some of the strictest gun laws in the nation. But it has been governed by corrupt Liberal Democrats for generations. It hasn’t had a Republican mayor since 1927 – almost 100 years.

Houston’s last 16 mayors have been Democrats. But before that run of Liberalism, the majority of its mayors were Republicans for most of its history going back to its founding in 1837. These Republicans were able to put their stamp on the city, the majority of whose residents are conservative at heart. But more important, Texans carry guns.

In Chicago, criminals aren’t afraid of citizens; they know the gun laws have made their prey defenseless. The evil ones know they can shoot whomever they wish, whenever they wish – with little chance of anyone with a gun being around to challenge them. Chicago has over 12,000 police officers, and brought in 1,000 extra last weekend – yet 100+ were shot and twelve murdered. There will never be enough cops, so citizens have to do their part. But it’s hard to do that when the law doesn’t permit you to defend yourself.

In Houston, the bad guys know that if they try to harm a citizen, they are likely to get a bad case of lead poisoning. Fully 50% of Texans own guns. And the three counties that comprise Houston have the most licensed gun owners per capita of all Texas counties. Evildoers have a better than 50% chance of being shot if they attack someone in Houston. So I can imagine many of those bad guys moving to Chicago, where they can feel safe.

If you were a mugger, rapist, or murderer, where would you feel safest committing crime – Chicago or Houston?

If you have a child, on which city’s streets would you feel most comfortable letting them walk to the park – Chicago or Houston?

I, for one, am grateful to the ordinary citizens, the brave patriots who picked up their guns and marched against the battle-seasoned professional troops of the British Empire. And I am grateful to the Founding Fathers who memorialized common sense in the Bill of Rights by guaranteeing that U.S. citizens have the right to “keep and bear arms.”

Deadliest July 4 Weekend in Chicago in Years, Despite 1,000 Extra Police;
Over 100 People Shot, Twelve Fatally, in Chicago Over Weekend
https://www.rt.com/usa/395395-deadly-july-4-chicago/

How Decades of Democratic Rule Ruined Some of Our Finest Cities
http://www.investors.com/politics/editorials/how-decades-of-democratic-rule-ruined-some-of-our-finest-cities/