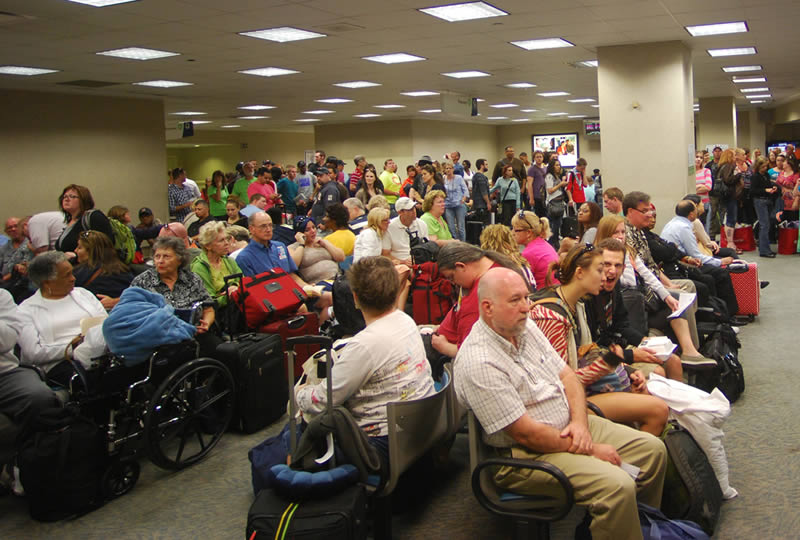 I shouldn’t have to explain this, especially to the geniuses in Washington whom we sent there to make wise choices on our behalf. But unfortunately, it’s obvious that they don’t understand this very basic concept. So how can they deal wisely with health care when they don’t even know what it is?

Obama deliberately misled millions of gullible Americans when he used the word “care” in the name of his law: “The Affordable Care Act.” Actual health care was almost totally ignored in the act. The only thing the act impacted in a meaningful way was health insurance. But the goal was neither better healthcare, nor better health insurance. It was all about government control of one-sixth of our economy.

The title of the Republican legislation is even worse. While Obama implied “health care” when he used the word “care", the Republican bill puts “Health Care” right in its title: “The American Health Care Act.”

And, as if to prove that it will just be ObamaCare Lite, the acronyms are almost the same: ObamaCare is known as the ACA, and the Republican abomination is ACHA. It keeps most of the worst features of ObamaCare and adds a huge insurance industry bailout that would even make Obama blush.

Collins never met a spending bill that she didn’t swoon over. She is not actually a Republican; in fact, she has voted with the Democrats more than any Republican Senator. Her objection to the bill is that it doesn’t spend enough of our tax money.

Rand Paul, on the other hand, rejects the bill because: Another huge mistake the Republicans are making is keeping the “pre-existing conditions” provision of ObamaCare. I know it sounds like a kind, generous, even biblical thing to do. But if it is kept, it will ruin insurance for everyone. It is simply untenable financially. So please think about this – really think about it. Think with your brain, not your emotions:

If you were allowed to drive your car without having to pay for auto insurance, knowing that if you had an accident you could, after the fact, buy an insurance policy for a few hundred dollars that would pay for thousands of dollars of damages – would you do it? And if you knew that you could stop paying on the policy after your car was repaired - since you knew that you could always get a policy again if you had another accident – would you do that?

This is what ObamaCare – and the Republican extension of this policy – does. I listened to Dr. Ezekiel Emmanuel, the architect of ObamaCare, defend this by saying that cancer patients didn’t cause their cancer, while a person who has an accident caused it. He’s wrong on both counts.

Many people do cause their own cancers – by smoking and other habits they know are unhealthy. Likewise many are accidents are the other guy’s fault. I have experienced this, and the other guy – an illegal immigrant - didn’t even have insurance. Fortunately, I had paid extra for a rider that covered me if the other person had ignored the law and had no vehicle insurance.

It would be nice if we could offer health insurance to people who had lived an unhealthy lifestyle and had a heart attack. But we can’t. Who would pay for it? Seven years of ObamaCare have led Americans to believe that such a thing is possible. After all, didn’t the government pass it? (No, only the Democrats did.) If the law passed, doesn’t that mean that there’s money to cover everyone’s pre-existing conditions? No – that was a huge lie.

The collapse of ObamaCare proves this. Obama promised lower premiums. Premiums have doubled in many states. Obama promised better policies. Most of the policies offered under ObamaCare are so bad that, in effect, the insured have no insurance.  A study by Health Pockets reveals that the average ObamaCare Bronze plan (the cheapest one available) has deductibles of $12,393. That was the amount many of these families paid for a year of insurance. Now they have to pay higher premiums, and the insurer doesn’t pay them a cent until they have shelled out $12,393.

The New York Times, which has always been one of the biggest cheerleaders of ObamaCare, is now reporting that it has proven to be so bad that in 2017 three million people living in 1,388 counties will have only one insurer. The rest have pulled out of ObamaCare. That is one-third of all American counties. With only one insurer, these counties face a monopoly. One insurer = no competition = higher premiums and even bigger deductibles. Worse, they’re reporting that there will be at least 45 counties with NO insurer.

ObamaCare is dead, and the Republicans want to put it on life support. Why? There was no need for it in the first place. The government should never have gotten involved in health care. If they can’t run the Post Office, why should we trust our health – and our lives – to them?

Instead of creating the ObamaCare trillion dollar nightmare, the government should have focused on ways to improve health care, not health insurance. Insurance problems could have been solved using a few simple ideas that the Republicans have passed in the past, but which the Democrats have ignored. Most insurance problems would go away if we removed dumb laws and rules that prevent the free market from working. For instance…
Health insurance is probably the worst thing that ever happened to health care. With the advent of health insurance, health care costs immediately started to rise. People started to overuse medical services since “someone else” was paying the bill. This increased demand, and since there will always be a finite amount of medical resources, health care costs rose. Your auto insurance doesn’t cover tune ups and oil changes. Why should your health insurance cover sniffles and coughs?

Doctors, hospitals, and clinics discovered that insurance is the goose that lays the golden egg. They realized that most people don’t check their bills the way they would if they were paying them personally. Today the FBI estimates that $80 Billion in health care fraud occurs every year. And we all pay for it. Of course, not all medical personnel are guilty of fraud. But I’d venture to say that every honest doctor in the country would admit that he or she has at least occasionally ordered unnecessary tests or medications. It’s easy money, and insurance makes it too tempting.

I could continue, but you get the idea. When the average citizen can abdicate responsibility for their own health care and the costs associated with it, they will do so. Who cares if some big, evil, nameless, faceless fat-cat insurance company has to foot the bill for unnecessary health care costs? The people who foolishly think this are forgetting the fundamental fact that they pay for the increased costs of both health insurance and health care. Since health insurance has been widely used, health care inflation has risen roughly twice as much as general inflation. (See the chart. CPI is the Consumer Price Index, AKA the Inflation Rate).

What was it like in the early days of our nation, before health insurance? Well, first of all, physicians weren’t millionaires. They got paid about the same as the local school teacher. And you received better health care since you were the client. These days, since the government or the private insurance company pays the bill, they are the client and the doctor has to please them.

Also, health professionals were able to spend most of their time taking care of you. Today, they spend huge amounts of their time dealing with insurance – not to mention the behind-the-scenes people who spend all their time on insurance paperwork. A study by BMC Health Services Research states that $375 Billion each year is wasted on unnecessary insurance-related administrative costs.

Would I like to see us go back to the “good old days” when people actually had a relationship with their doctors and paid them themselves? Absolutely. No one went without medical care in those days. If they were poor the local church would pay the doctor, and the doctor would often not charge them. We were healthier and happier then.

Do I think the government and the medical establishment would ever allow us to roll back their control of our lives and health? Absolutely not.  And do I think the people would give up the imagined security of being able to access health providers – whether they needed to or not – and let “somebody else” pay the bill? Never.

But there is a sensible compromise that would save trillions of dollars and would enable us to get the government’s big nose out of our business. Offer catastrophic insurance policies only. If a person experienced a major medical event or trauma, this would be their safety net. Let them pay for small items like yearly physicals or the sniffles out of their pockets. I guarantee you that when demand decreases due to this, the price you pay for a doctor visit will drop to around what you pay today as your co-pay.

There are also some very interesting medical cost sharing plans out there. They are not insurance. Groups of people agree to share the costs of each other’s major medical expenses. This is in line with the Biblical command to “Bear one another’s burdens.” So it is no surprise that most of these are Christian organizations. Watch the video of a Webinar taught on www.ChristianFinancialConcepts by Tony Dale, M.D. (Link is below.) “What Would Christian Health Care Look Like” is a real eye-opener that demonstrates how you can have quality health care at less than a third of the cost of health insurance.

Now the Republicans are about to make the disastrous mistake of perpetuating ObamaCare. They’re worried that if they don’t leave some of the most egregious aspects of ObamaCare (such as getting insurance after you become seriously ill) in their bill, they will look mean. And they worry that is they don’t pass something they will look weak. But those are political implications for how this will impact their Party, not what’s best for the nation.

But if they’re going to look at political impact (and they always do), how about this? Right now the disaster of ObamaCare, which is going to get much worse, is strictly the responsibility of Obama and the Democrats. If the Republicans pass the Senate Bill and the House approves it, President Trump and the Republicans will own ObamaCare, Version II. When that implodes, they could lose both Houses of Congress and potentially the White House when the people realize they broke their promise to repeal ObamaCare and improved nothing.

Trump and the Republicans should: As for you, don’t put pressure on your representatives to march in lock step with the Party. The communists showed us that the Party is not always right. Republicans don’t have to blindly follow the “Leadership” off a cliff. In my opinion, the “Leadership” is weak, particularly in the Senate.

Encourage your Senators and Representatives to use their brains. Tell them to research the issues themselves, rather than taking the word of their leaders. Explain to them that being a “Good Republican” doesn’t mean being an “Obedient Republican,” which is what many Conservative radio and TV personalities have been telling them.

Above all, remind them that they didn’t promise to “Repeal and Replace” ObamaCare. That phrase came later after the Republican leadership began to fear the Democrats and the so-called “moderates” in their own Party. Check the records and the recordings. They all promised to “Repeal ObamaCare.” Tell them you expect them to keep their word – or look for another job.

VIDEO: “What Would Christian Health Care Look Like?”
http://christianfinancialconcepts.com/article.php?id=4559

ObamaCare Deductibles are on the Rise for 2017
http://www.cnbc.com/2016/10/26/obamacare-deductibles-are-on-the-rise-for-2017-along-with-monthly-premiums.html

Why Health Insurance is not Health Care
https://www.forbes.com/sites/aroy/2012/10/15/why-health-insurance-is-not-the-same-thing-as-health-care/#1f18a36c47af