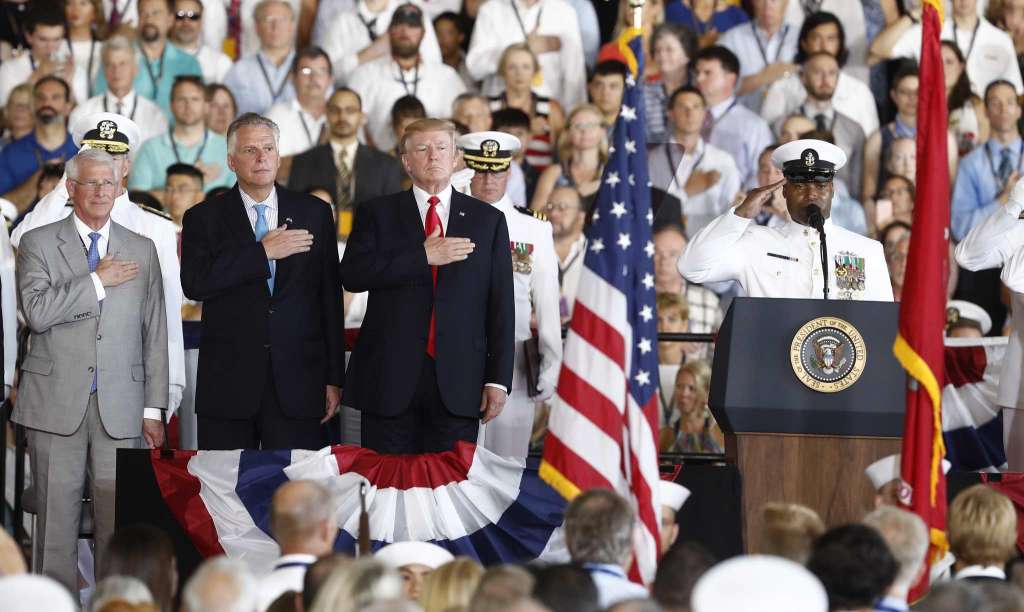 On Saturday, July 22, President Donald Trump commissioned the USS Gerald R. Ford aircraft carrier. In his speech, he said, “I love our military!” to which the assembled seamen and their families responded with wild applause and cheers.

Do you remember when Obama, said, “I love our military”? Neither do I, because he never said it. I searched diligently for an Obama quote where he even expressed appreciation for our military, but to no avail. The closest I found was when he said he would take care of our veterans (something he failed to do).

I searched through several hundred Obama quotes that mention the military. The only time he showed any passion was when he said, “Climate change constitutes a serious threat to global security, an immediate risk to our national security, and, make no mistake, it will impact how our military defends our country.” The man has no shame. He tries to tie our military to his radical “climate change” claptrap.

He did make one campaign promise regarding the military that he kept. He promised to cut the size of our military in half, and he did so. It will take years for us to regain the military readiness that Obama squandered.

Why am I talking about Obama when he is no longer in office? Two reasons: (1) He’s gone from the White House, but he’s not really gone. (2) He is, to a large extent, the embodiment of the current Democrat party.

Look at some obvious contrasts. Republicans love our military as much as President Trump does. Democrats (unless they’re running for office in an area with lots of military voters) take every opportunity to bash our men and women in uniform. It was the Democrats who called our soldiers “baby killers,” spat on them and cursed them in the airports when they returned home from Vietnam.

Every time Republicans are in power in Washington, they work to build up our military strength, personnel, and weapons systems. When the Democrats get back into power, they rush to raid the military treasury and spend the stolen funds on “climate change,” federally funded abortions, and brain-washing our children to make them believe that government has the answers to all problems.

Republicans work hard to protect our veterans and see that they get the best care possible after they have given so much to our country. Democrats pay lip service to veterans but remember that Obama did nothing when the incompetence and corruption of the Veteran’s Administration were revealed. Obama refused to fire the corrupt and incompetent employees. And the patriotic whistleblowers at the VA were punished for bringing this shame to light.

There are many other contrasts. For instance...

I think it is fair to say that, in general, the Democrat Party oppose the Christian religion while supporting Islam (no one knows why except that Obama’s roots are clearly Muslim). Republicans tend to support religious liberty for all, and many are born-again believers.

Democrats tend to think of the maxims of both the Constitution and the Bible as containing suggestions rather than laws, and are thus open to a so-called “Living Consitution” (think “Transformers”), while Republicans revere the Constitution and most believe the Bible is the literal Word of God. This is not to say that a Democrat cannot be a Christian. But it must be hard when your party’s platform advocates for killing the unborn, homosexual “marriage,” and genocide of the elderly – all clearly unbiblical positions.

Democrats sincerely believe that the government should control everything because the elites are much wiser than “we, the people,” and we should, therefore, be grateful that they are willing to tell us every move we should make. Republicans understand that our rights come from God and that therefore the government should serve us – not the other way around.

I could go on with the comparisons, but it would become depressing. So that’s why I felt a leap of joy when I heard President Trump say unashamedly, “I love our military!”

Finally, after eight years of Obama bashing the military, ruining their morale, and putting them in danger by imposing ridiculous rules of engagement and refusing to give them the equipment they desperately needed – we have a president who loves our military.

I know lots of military people, and I hear from thousands of others by email and by website comments. There may be some out there who feel differently, but the ones I heard from despised Obama and voted for Trump. According to a Military Times article, over 50% rated Obama unfavorably, and only 18% gave him a very favorable rating. Over 60% of Marines (well known to be the most intelligent service members) gave him an unfavorable rating.

Their complaints included his decision to decrease military readiness; his lack of focus on the biggest dangers facing America (most said China is the most significant threat); and his moves to withdraw combat troops from Iraq, which they said made America less safe. Many accused him of trading our security for political gain, and for allowing the rise of terrorists like the Islamic State.

98% of respondents to the Military Times poll said Obama’s military budget cuts hurt morale and readiness. And the majority of the generals and top Defense Department officials had nothing but negative comments about Obama, including calling him a coward and describing his anti-ISIS plan “unguided by a sustained policy or sound strategy, replete with half-measures.” Overall, among both active duty and retired senior military officers, only 3% describe themselves as Liberal.

It is of vital importance for our national security that we have troops with high morale who are motivated  - and feel appreciated. After eight years of being downtrodden and despised by their Commander-in-Chief, it must feel good to have a president who values them – and is not afraid to say that he loves them.