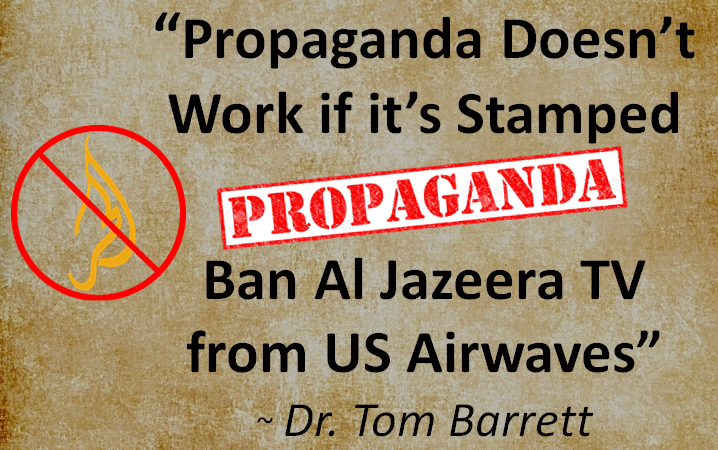 You may have seen Al Jazeera Television as it's broadcast in the West, and thought, "This looks pretty much like real broadcast television." It's not. Read on to find out how this propaganda network infiltrated the US, and how it endangers us.

Five Muslim Arab nations have broken diplomatic ties with Qatar because of its support for terrorism. These include Saudi Arabia, the United Arab Emirates, Egypt, Bahrain, and Yemen. All but Egypt, which has 250,000 workers in Qatar, have ordered their citizens home.

Qatar is the home of the infamous Al Jazeera television network. These nations, as well as Jordan, have taken the network off their airwaves and closed its offices. Now Israel has joined its neighbors in condemning and banning the renegade TV network.

My question for US government officials is this. If the six leading Muslim Arab nations, along with Israel (the only democracy in the region) have determined that Al Jazeera supports Islamic terrorism, why does the United States still allow it to be aired here?

Here is a quick history of how Al Jazeera came to be. Al Gore and some partners bought the assets of a US television network in 2004, with Gore personally holding 20% of the company. Gore started Current TV, an unabashedly Liberal network. It was a complete and utter failure. The main problem seemed to have been that...nobody watched it.

At its peak, Current TV's prime-time national programming attracted only 42,000 - far less than some cable networks in local markets draw. Its "stars" were commentators like disgraced York Governor Eliot Spitzer and other Liberal loonies.

When it became known that the network was for sale, Glen Beck -  who, unlike Gore, is an American Patriot - offered to buy it for far more than it was worth. Gore turned the offer down because Beck's programming did not fit with his political philosophy.

Instead, he chose to sell it for $500 Million to someone whose political sensibilities were more in tune with his own - the Emir of Qatar. Al Jazeera was already operating there as the mouthpiece for several Islamic terror groups. It broadcast smuggled tapes of Osama bin Laden during the height of the war on terror. Now, amazingly, a former Vice-President of the US had given them a platform on which to build Al Zajeera English.

Today Al Zaeeraha as it is broadcast in the Middle East continues to overtly spew it's violent, hateful rhetoric in Arabic. It supports terrorism, incites violence against Israel, and describes in great detail the sins of Christianity from its warped world view.

On the other hand, Al Jazeera English is much more subtle and nuanced. It knows that it can't speak plainly as it does in its Arabic version. But it serves its intended purpose. It encourages radicals who live in English speaking nation to be strong in their support of their warped cause of world domination. And it causes uninformed Westerners to question their own values and beliefs.