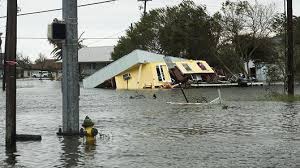 Trust the Democrats to take advantage of human suffering to promote their Liberal agenda. Before Hurricane Harvey even made landfall on the Texas Gulf coast, they already had their political knives out, anxious to draw blood.

They talked about the fact that this was President Trump’s first major disaster and gleefully anticipated that he would fail, comparing this storm to Hurricane Katrina. But Democrats and the media failed to compare Trump’s timely response to Obama’s appalling lack of response to Hurricane Sandy.

Although President George W. Bush manned up and took responsibility for the poor response to Katrina, the real fault lay with the Democrat Governor of Louisiana and the Democrat Mayor of New Orleans. Bush, unlike Obama, was not one to blame everyone else for problems. He did everything he could to help the people of Louisiana, but the Democrat machine, for political purposes, blocked him at every turn.

For instance, FEMA wanted to use New Orleans’ fleet of thousands of school buses to evacuate people from New Orleans. They could have ferried out 12,000 people per run. But the mayor refused to use the buses, or even to move them to high ground. So the nation watched as the buses – which could have saved over a thousand lives – were eventually rendered inoperable by the flood waters.

The biggest problem with assessing responsibility for the response to a disaster is that the public – and most of the media – don’t understand the nature and mission of FEMA. According to the FEMA website, “FEMA’s mission is to support our citizens and first responders to ensure that as a nation we work together to build, sustain and improve our capability to prepare for, protect against, respond to, recover from and mitigate all hazards.”

Notice that the Congressional mandate for FEMA is not that they be first responders; they are tasked with supporting first responders. The initial response is – and must be – the responsibility of states, counties, and cities. They know the area. And they already there. The federal government can’t have an emergency response capability in every county. America can’t continue to look to the federal government for every need.

FEMA’s main responsibility is to come in after the disaster and help with recovery. They provide housing, food, and water. They are also supposed to move supplies into areas where devastation is expected before the event. In the case of Hurricane Sandy, Obama failed to have FEMA pre-position life-saving supplies before the storm hit.

It is also significant that FEMA is not allowed to enter a state for disaster mitigation until the governor of the state requests their services. In the case of Katrina, Governor Kathleen Blanco (D-LA) delayed that request until three days after the storm hit. Democrat New Orleans Mayor Ray Nagin insisted everything was fine and federal help wasn’t needed.

By contrast, Governor Greg Abbot (R-TX) requested FEMA before the storm made landfall, and President Trump granted his request for a major disaster proclamation almost immediately.

Another significant difference between Katrina and Harvey was the nature of the storm damage. The New Orleans flooding was the result of the disintegration of New Orleans’ levees. They had not been maintained properly, in spite of numerous warnings. The result was predictable. The Texas flooding, by contrast, was all caused by nature.

The big difference was the response by local authorities, something neither Bush nor Trump can control. Whether people live or die in a natural disaster is mostly in the hands of local governments. As I mentioned above, the response of the Louisiana Democrats in charge of the storm response was abysmal, resulting in the deaths of almost 1,600 citizens. Because the Republican governor of Texas had his act together, loss of life has been minimal with Harvey -  mostly because Texas did what Louisiana did not do. They evacuated the danger area.

Another Liberal lie that was spouted was that this hurricane was the result of “Climate Change.” The fact is that this was the first major storm to make landfall in 12 years. The Democrats have been screaming “Climate Change Kills!” all during those 12 years. So why haven’t we had more major hurricanes during that time?

They also claimed that the major flooding was due to the evil monster “Climate Change.” Unusual amounts of rain accompanied this hurricane directly due to “Climate Change,” they say. But every meteorologist agrees with one thing about this storm – that its slow movement has given it more time to drop water. The same thing happened where I live in South Florida years ago. They called it a “100-Year Storm” because it stalled and just kept dropping rain while it moved very little.

Finally, let’s discuss which Party protects the citizens in disaster situations. Remember that, in the case of Hurricane Katrina, both the Mayor Nagin and Governor Blanco insisted for three days to President Bush that everything was under control and federal help wasn’t needed. Then, after everything fell apart, they both blamed the President and FEMA.

Nagin only issued a mandatory evacuation order after Katrina became a Category 5 storm, and just hours before it made landfall. He should have issued the order – and requested FEMA assistance – days earlier. (Nagin is now serving 10 years in the federal pen for 20 counts of bribery.) The state and city had an elaborate emergency plan – but for some reason failed to implement it.

Democrats criticized President Bush for not visiting New Orleans immediately. But when the president comes to town, much-needed resources are diverted to protecting him. Bush wisely stayed away. By contrast, Obama went to NewJersey for a 90-minute photo opportunity that delayed rescue efforts. Then he jetted off to Las Vegas to continue his re-election campaign.

I mentioned earlier that Obama failed to order FEMA to pre-position emergency supplies prior to Sandy. Millions of dollars worth of food, water, generators and other vital supplies were available. But they were stored in warehouses in Atlanta and Maryland. By contrast, President Trump’s FEMA moved hundreds of thousands of meals, tons of water, tarps and emergency generators to provide electricity to hospitals and other critical sites.

The Democrats can criticize Trump all they want. But they can’t change the facts. Because a pragmatic businessman is in the White House, and because Republican officials who care were in key political positions in Texas, Hurricane Harvey caused far less devastation than Hurricane Sandy. No one can control the intensity of a natural disaster. But we can control the response. The people of Texas can be thankful that they have a Conservative President and Governor who understand their duty and don’t let politics get in the way of safety.

Sandy is Obama’s Katrina — but the Media Look Away

FEMA Sending Supplies to South Texas Ahead of Harvey