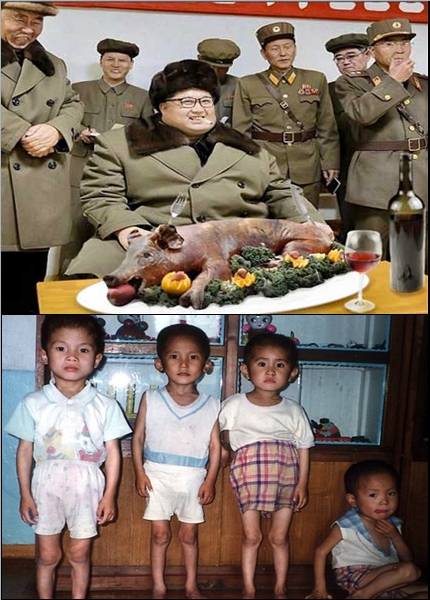 Every nation (including its BFF, Communist China) agrees that North Korea must be stopped before it starts a nuclear war. If Kim Jong Un were to carry out his threatened attack against Guam, initial casualties would include 16% of the population, with many more to follow due to radiation. Since Guam, with Air Force, Coast Guard, and Navy bases and thousands of US troops, is considered a “strategic” outpost of the U.S., such an attack would immediately launch WWIII.

Kim’s latest threats include direct attacks on the U.S. mainland. Our “red line” has always been that we would never allow NoKo to achieve the capability of hitting U.S. soil with a nuclear device. That line has been crossed. Our analysts now state that the dictatorship can deliver ballistic missiles to Los Angles or New York. And a hydrogen device the size of the one Kim just tested would cause 1 Million casualties, one-third of those immediate deaths if it hit New York City. They may well have much larger devices in their arsenal.

The threat is real. How real are the solutions?

President Trump and other U.S. defense and diplomatic officials have recently threatened that the U.S. is willing to wipe out the Communist nation to save ours. While it is smart to let belligerents know that we have both the capability and the will to destroy them utterly, it is highly unlikely that we would take that course.

What about decapitation? No, we won’t chop off the heads of the leadership of NoKo like ISIS likes to do. But could we “decapitate” the nation by assassinating Kim Jong Un and his top leadership? It seems like a good idea. The vast majority of North Korean citizens would probably welcome such a move. All they want is something to eat and maybe a little freedom for dessert. But South Korea has made several attempts at taking out various Kims over the years; all have ended in disaster.

OK, why don’t we use economic sanctions? Been there, done that, got the T-shirt AND the hat. Every president from #41 through Obama has tried to starve out North Korea. The problem is that the leadership doesn’t care if their people die from hunger. Almost 4 million already have. And the pudgy Divine Supreme Leader has enough layers of fat to last him for months. The current Trump-led sanctions that have gotten China and Russia on board are the most draconian ever. But Little Rocket Boy just keeps popping off missiles.

If he attacked a U.S. installation or one of our allies, we might be forced to wipe out his entire country. But in the course of the war most of South Korea, large portions of Japan, and tens of thousands of American troops would be wiped out. Why not do two simple things that would stop the aggression, rid the world forever of Kim and his top dirtbags, and save the North Korean people?

The Pentagon is definite that we have the capability of shooting down NoKo’s (or any other country’s) ICBM’s. If a North Koran missile were to launch on a trajectory that threatened any of our strategic interests, U.S. destroyers stationed off its coast would simply shoot it down. Also, we have a “multi-layered” missile defense capability that would destroy any missile that got past the destroyers long before it could reach its target. This is a much-improved version of President Regan’s “Star Wars” system that the Democrats fought so hard to defeat.

"We maintain abilities to be able to respond quickly and intercept missiles from North Korea if they do pose a threat to us or our allies," said Navy Capt. Jeff Davis, a Pentagon spokesman. "We are absolutely confident in the system," Chris Johnson, spokesman for the Missile Defense Agency said. "Based on our history of testing, we are convinced that the system would be able to defend the United States."

For the life of me, I can’t understand why we aren’t already shooting down every test missile Kim fires. If we did, it wouldn’t be long before he would stop wasting their time and money. Some say that shooting down the missiles would be an act of war. Perhaps. But no more so than Kim threatening Guam, then firing a rocket close to Guam. At least this course of action would only hurt missiles, not people.

My second option would result in the deaths of some people, but the vast majority would survive. The benefit would be that  NoKo’s aggressive capabilities would be crippled for decades. I am speaking, of course, of an EMP (Electro-Magnetic Pulse) attack.

North Korea has long had the capability of launching an EMP attack against the U.S. mainland. Today it has Russian scientists developing technology transferred from Russia to prepare for just such an attack against America. An EMP attack is the detonation of a nuclear device high in our atmosphere that would “fry” all electronics, leaving buildings intact and killing few people directly. Of course, airplanes would drop out of the sky and cars would crash when their electronics failed.

The serious problems would be long-term as the power grids collapsed and people froze to death in winter or died from heat in the summer. Most life-saving functions of hospitals are entirely dependent on electronics. Food deliveries would cease without the Internet to direct trucks, and only old vehicles that didn’t depend upon onboard computers would still run. Aircraft and most trains would not run.

Most non-scientists dismiss the idea of an EMP attack as fear-mongering. But nature has demonstrated the devastation of a common cause of EMP: solar flares. In 1859 a massive solar flare took out almost all telegraph systems in North America and Europe. You might say, “1859 was over 150 years ago. That’s no threat to us today.” Did you know that a similar size solar storm occurred in 2012? It didn’t impact the earth, but it passed by so closely that it easily could have.

What if it had? In 1859 people survived without telegraphs. That would be like surviving without cell phones today. Contrary to the belief of most Millenials, it is possible to live without cell phones. But a solar event like the one in 1859 (or an EMP attack) would certainly have a massive impact on our current technology-dependent society. Overnight we would find ourselves living like our ancestors did when this nation was founded – hand-drilling wells, plowing with horses, and working eighteen hours a day just to find or produce food.

So why don’t we turn the threat around? If we try shooting down their missiles, and North Korea remains hostile to the world, we should explode several carefully targeted nukes in their atmosphere in a way that would cause minimal damage to South Korea. This would destroy NoKo’s ability to launch or guide missiles, would devastate their command and control centers, and would decimate communications between military units. South Korean and United Nations could quickly capture Kim and his fellow criminals and put them on trial for humanitarian and war crimes.

Kim and the top Communist officials live lives of luxury. The chubby dictator spends $30 Million annually on imported liquor, and owns a multi-million dollar luxury yacht. He recently bought his wife a Christian Dior purse that cost more than a NoKo farmer makes in a year. Kim spent millions of State funds to buy 160 top Communist officials luxury Mercedes-Benz sedans in 2010, and owns over 100 exotic cars personally. Most shocking, he loves racehorses so much that he spends 20% of the entire nation’s budget on his horses and their upkeep.

But the people of North Korea live in such primitive conditions that an EMP attack would have much less impact on their lives than on Kim’s. The majority of the few homes that have electricity only get it for a few hours each day. Most workers earn $2 to $3 per month (not per day) from the government. School children are often forced to labor for the government instead of being taught. And if they are unfortunate enough to have to stay in a “free” NoKo hospital, patients have to pay for heat and drugs, and their families have to bring food from home.

So, let’s summarize the options for stopping North Korea from starting WWIII:
1)   Sanctions – USELESS.
2)   Diplomacy – WORSE THAN USELESS.
3)   Assassinating Kim – PROBABLY IMPOSSIBLE.
4)   Killing everyone in the nation – ABSOLUTE LAST RESORT.
5)   An EMP attack on the rogue nation – EFFECTIVE.
6)   Shooting down missiles as soon as they are launched – THE BEST OPTION.

Let’s go with #6 and save the poor people of North Korea – who hate Kim as much as the rest of the world does.

Can the US Shoot Down North Korean Missiles?

A North Korean Nuclear EMP Attack: The Threat America Downplays at Its Peril

What If the Biggest Solar Storm on Record Happened Today?