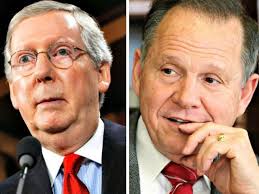 Mitch McConnell wanted a senator he could control. The people of Alabama wanted a senator they could trust. McConnell pulled out all his big guns, including convincing the president to endorse Luther Strange, the sitting senator. Presidents don't normally get involved in primaries because they have to support whoever wins. Things sometimes get messy in such races, as they did in this one.

Whenever they're running against a Republican, Dems run vicious ads calling them racists and every other vile name. They lie and use underhanded tactics. In this race, it was McConnell (through his PAC's that spent $30 Million - unprecedented in a state race) and Strange who ran attack ads that looked like they had been written by Democrats.

Meanwhile, Judge Moore, a Conservative Evangelical Christian with a war chest 7% the size of Strange's (he only spent $2 Million), just told the truth. He promised the people of the state that he would represent them, not the GOP establishment. He had already proved his courage when out-of-control federal judges ordered him removed from his office as the Chief Justice of the AL Supreme Court - twice! The first time it was for have the Ten Commandments on state property (the US Supremes have them right in their chambers). The second time was when he stood up against an unconstitutional federal law regarding homosexual marriage.

It's nice to see the good guy win every once in a while. We have so few of them in American politics.