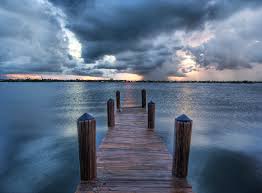 There has been much speculation, hysteria, and fearmongering in response to President Trump’s statement last Thursday that “Maybe it’s the calm before the storm.”

There’s massive Twitter Terror. Someone named COMMIE PINKO tweeted, “Trump needs to be dragged out of the White House in shackles, made to do a perp walk, then locked up in a rubber room for the rest of his life before he starts WW3!” KITTY MAMA cried, “He is clearly a threat to the security of the United States. Time to invoke the 25th Amendment.” LOST IN BERLIN bloviated, “So are any of these wonderful generals that Trump has grouped around him going to step up and take the toys away from this boy before it's too late?”

The Liberals are outraged because:
1) He won’t tell them what he meant. (How dare he not answer their shouted questions?)
2) He had the temerity to smile when he said it. And then he winked! Horrors!

So what did the president mean? Why did he make the statement? It wasn’t an offhand, spur-of-the-moment remark as some pundits have suggested. He assembled his guests – several generals and their wives – and called the press into the room. The photo opp wasn’t in the plan for the evening, nor was it standard practice. He wanted his statement to be reported.

The Leftist media immediately proclaimed that he was about to carpet bomb North Korea. Nope, that wasn’t the reason for his unusual statement. Some opined that he was preparing the nation for a preemptive strike on Iran to keep it from building a nuclear weapon. Nope again. Perhaps some kind of escalation in the Middle East? A trade war with China? What about an all-out effort to crush ISIS once and for all? Nope, nope, and nope again.

There’s no question that there are many hot spots in the world. In addition to those mentioned above, we have Russia, Libya, Egypt, Afghanistan, and many others. Any one of them could develop into a storm. But he wasn’t referring to any of them specifically.

Some have said he was just “trolling” the press. (Trolling is “Making a deliberately provocative statement – in particular, an online post – with the aim of upsetting someone or eliciting a response from them.) Well, there’s no doubt the press is thoroughly agitated. They’re hyperventilating, and it has been reported that a few even wet their pants. But, while it has been fun to watch them freak out, Trump wasn’t trolling the press. He doesn’t care what they think.

Here’s the truth. Trump was speaking to dictators, terrorists, and the leaders of nations hostile to the U.S. throughout the world. None of them knows to whom he directed his remarks, but I guarantee you that every one of them believes Trump was talking directly to him.

That’s the beauty of this strategy. He has all our adversaries worried that he might be coming after them. All of them have to be considering how they can keep the full might of America from raining down on them since none would stand a chance in a conflict with us.

Sometimes I get annoyed with all of his tweets, many of which are gratuitous and serve no useful purpose. I suppose he just needs to let off some steam, and he does it through Twitter. But this was not that.

This was brilliant. He made the press his errand boys and girls to get his message to all the evil despots in the world: “Shape up because we’re watching you. Stop your scheming or the next – and last – sound you hear just might be the roar of a missile.”