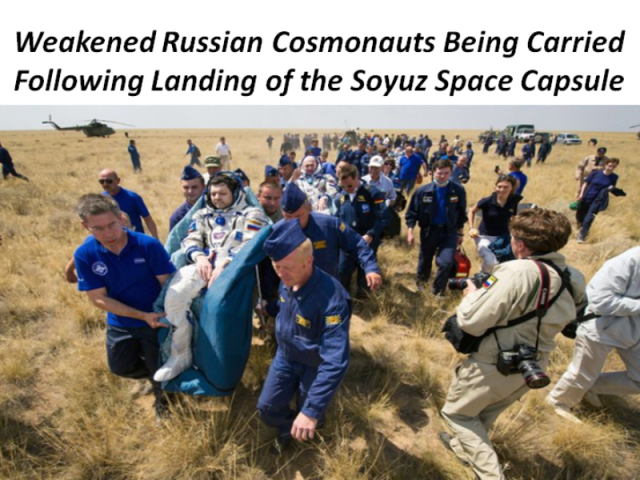 No one is certain whether little green men really live on Mars. But if they do, human frailty may keep us from ever meeting them. We have the technology to put men and women on Mars, but with NASA’s current health and spacesuit technology, they probably wouldn't survive the trip. Why?

Have you ever noticed that when astronauts return to the earth after six months on the space station, they disappear for several months following the smiling publicity shots? That’s because their bodies take a while – sometimes a long while – to adjust to the normality of earth. Most astronauts exercise several hours a day on their missions to counteract the harmful effects of living in space, but it still takes months of rehabilitation to adjust to living on earth after a typical six-month space mission.

Some of the ill-effects space travelers experience include up to a 22% loss in blood volume in two to three days; muscles in the legs, neck, and back losing as much as 20% of their mass; and bones atrophy between 1% and 2% per month in space. Some astronauts have been documented as experiencing as much as 20% loss of bone mass on six-month flights.

Even a few days in space can cause health problems. After spending just two weeks in space in 2006, Heidemarie Stefanyshyn-Piper collapsed during a press conference after landing, because her body had not adjusted to the gravitational and magnetic field of the earth.

"We normally say that it takes a day of recovery on Earth for each day that somebody's in space," explains Dr. Victor Schneider, research medical officer for NASA headquarters. Some adverse effects may never be reversed.

Let’s look at the three primary problems that NASA must address before humans can safely undertake an extended mission of three years (such as a meet and greet with the little green men of Mars).
In addition to the three main health dangers of health flight, other possible risks exist. Some astronauts have returned to earth with “diabetes-like symptoms.” Fortunately, so far these have dissipated in a short time. Many have experienced vision problems caused by increased intraocular pressure, some of which could cause partial or full blindness. And rats studied in a 2016 flight of two weeks duration developed early signs of liver disease. So NASA has much work to do to protect the health of the pioneers who will eventually venture out on longer and longer missions.

Most non-scientists assume that these adverse health effects are due to the lack of contact with the earth’s gravitational field. That is partly true. But another critical factor that is missing from the lives of space explorers is the lack of contact with the earth’s magnetic field. According to one doctor, “Space program managers are keenly aware that it is not just a lack of gravity that has a negative impact on astronauts' bodies, but the lack of the earth's magnetic field.”

The 2015 “Review of NASA's Evidence Reports on Human Health Risks” was released by National Academies of Science, Engineering, and Medicine. Its recommendations include that NASA should:
NASA has tried various methods of treating the health problems of space travel, including osteoporosis drugs for bone loss and intense exercise to combat muscle atrophy. It has also been working on new spacesuits that may reduce the risk of injury or illness.

Fortunately, NASA has learned about a technology that provides an electromagnetic field safely and has partnered with the European company that pioneered the technology. Together they plan to engineer the next generation of spacesuits. The technology can increase blood flow and oxygenation of the body’s cells. The hope is that it will eliminate or mitigate many of the problems described in this article, and hasten the recovery time of the brave astronauts who risk their lives to advance scientific knowledge.

CNBC: The Health Risks of Spending a Year in Outer Space
https://www.cnbc.com/2016/01/07/the-health-risks-of-spending-a-year-in-outer-space.html

Space.com: Weightlessness and its Effect on Astronauts
https://www.space.com/23017-weightlessness.html

What Are the Long-Term Effects of Living in Space?
NASA is Studying Twins Mark & Scott Kelly to Find Out.
http://www.latimes.com/science/la-sci-nasa-twin-study-20160707-snap-story.html