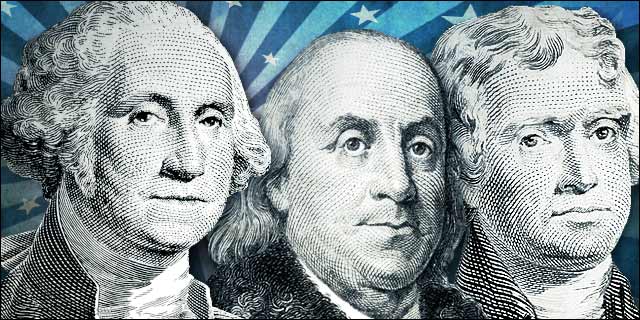 The Founders decreed in the U.S. Constitution that Gold and Silver would be our money. In doing so they acknowledged that Gold and Silver had been money since the beginning of recorded time. Gold and Silver are also the only Biblical money. (See Genesis 2 and Haggai 2.)
For 145 years our nation did not have the constant monetary crises we have today: Inflation, Deflation, Recession, Stagflation, Depression. The value of the dollar remained constant until 1933 when Franklin Delano Roosevelt (FDR) committed the Crime of the Century. He used an Executive Order to take the U.S. off the Gold Standard that had served us so well. He stole 40% of the nation's wealth from private citizens. And he started our nation on the path to Socialism.
Since 1933 the U.S. Dollar has lost 96% of its purchasing power! It takes almost $25 today to purchase what $1 bought in 1933. And it's all thanks to FDR's treason. When I preach, I tell the folks, "Don't take my word for it. Check it out in the Bible." Same here. Don't believe it because I say it. Go to the government's own Consumer Price Index (CPI) Inflation Calculator: https://data.bls.gov/cgi-bin/cpicalc.pl


Our money used to be Gold and Silver. When we started using paper money for convenience, it was backed by Gold and Silver. Today, our paper money is backed by nothing - it is worthless. It's like the game of musical chairs - when the music stops, the last person has no place to sit.
As long as people think our paper (fiat) money has value, they will accept it for something of real value. But when the music stops - when people lose confidence in their money - the last one holding it will get nothing of value for it. This has already happened in dozens of debt-ridden of nations in modern times. And the U.S. today has more debt than any nation in history.
If I was one of the Founders, I wouldn't want my face on this Monopoly money, either.
To learn more about how to protect your family from the Cancer of Inflation:
www.ChristianFinancialConcepts.com