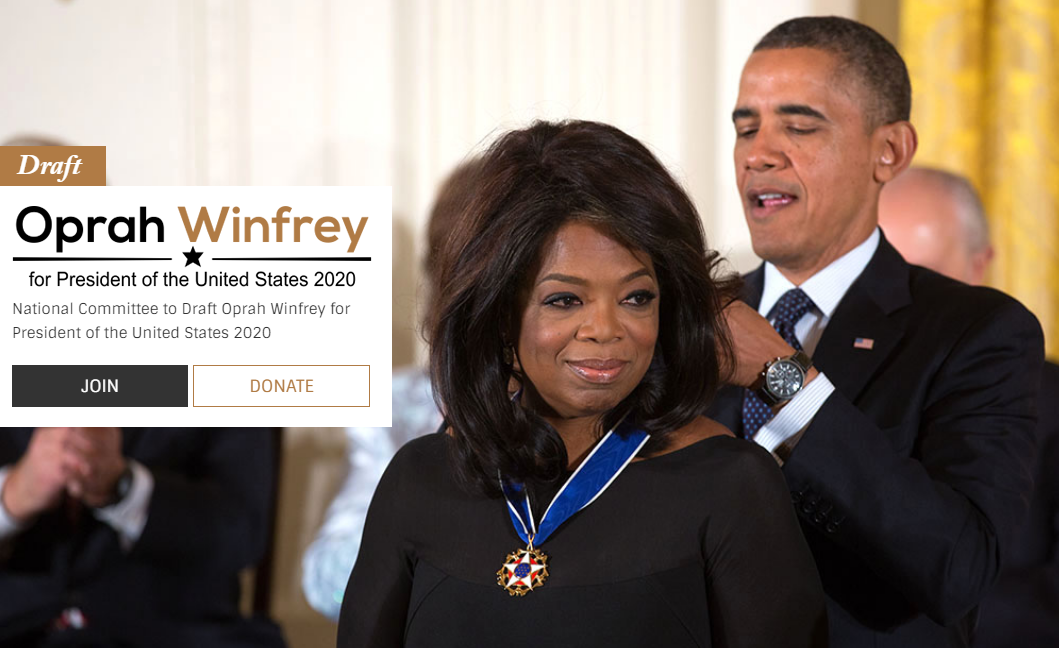 Recently Oprah Winfrey gave a speech at an entertainment industry event (the Golden Globe Awards). Apparently, her extremely liberal audience liked it, because there were immediate cries of "Oprah for President." Some goofy guy has put up a "Draft Oprah for 2010" website. I don't know if she approved it or not, but if she did she must be anxious to be embarrassed.

Usually, the party out of power will run someone they don't want to damage when they're faced with a strong incumbent president like Trump. The one chosen to be the sacrificial lamb will typically be someone with good name recognition who doesn't have a chance. A good choice for the Dems in 2010 would be Joe Biden - everyone's favorite crazy uncle. Why would anyone volunteer to the sacrificed? Probably because they want some glory or recognition before they fade into oblivion.

Which is why I doubt that Oprah will allow herself to be "drafted." She is well-known and generally well-liked. But if she ran for president, all her "stuff" would come out. For instance, in 1992 she was engaged to be married to her current "partner." But they decided they would have a "spiritual marriage" instead. The fringe Democrats are OK with shacking up and even homosexual marriage. But the majority are pretty mainstream about things like this. Can you imagine an unmarried couple sleeping together in the White House?

Then there's the matter of her politics. Again, she is far to the left of most of her party. Obama was an extreme leftist, but Oprah is more like Elizabeth Warren. When she interviewed Obama she said, "When I decided to talk with you people around me were like, ‘What’s happened to you?’ I said, ‘I think this is beyond and above politics. It feels like something new.'"

As far as her religious beliefs are concerned, Winfrey is a pantheist. "One of the mistakes that human beings make is believing that there is only one way to live. There are many paths to what you call God." Speaking of her Baptist upbringing, she says, "The minister said, ‘The Lord, thy God is a jealous God.’ And I was, you know, caught up in the rapture of that moment until he said 'jealous' and something about that didn’t feel right in my spirit because I believe that God is love and God is in all things."

So how would you like a New Age wacko who believes God dwells in rocks and trees, and who was foolish enough to buy Obama's "Hope and Change" garbage running the nation?