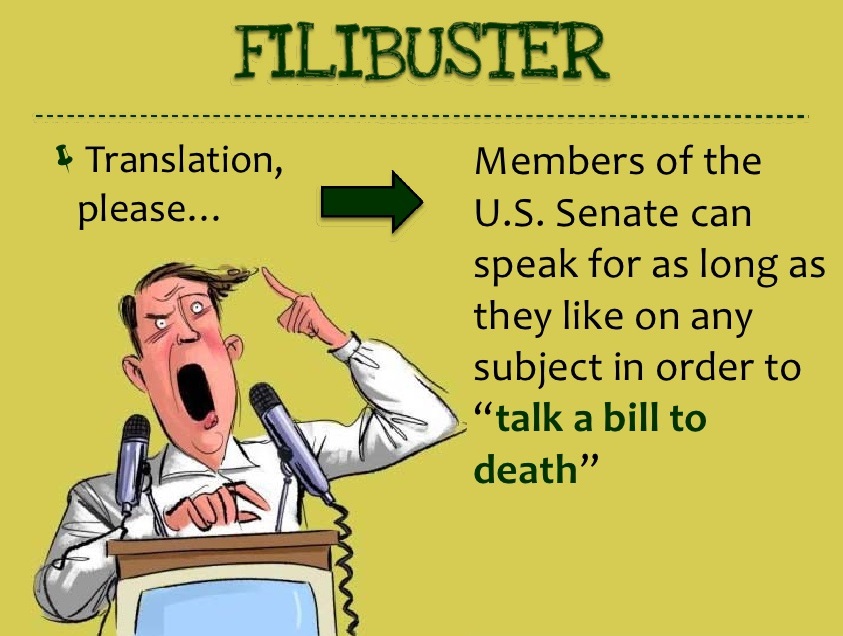 Every time Democrats block legislation – which they did when they shut down the government recently – they blame the Republicans. The Republicans do NOT control Congress. But they could – if they really wanted to. The question is, why does the antiquated Senate Majority “Leader” Mitch McConnell refuse to do the one simple thing that would allow Republicans to govern?

The answer is that McConnell is afraid. He’s terrified that if he abolishes a Senate rule that is as antiquated as he is, it will give Republicans a temporary advantage; but the Democrats would have that advantage if they ever regain control of the Senate. I believe that if he had the courage to live up to his title and acted as a leader, the Conservative wing of the Republican Party would accomplish so much good that it would be a cold day before Democrats ever regained control.

Here’s how the legislative process would work if we followed the Constitution. If all that sounds complicated, it is a deliberate complexity built into our Constitution by the Founders to keep one branch of government from running roughshod over another. In this case, the president cannot create laws, but he can veto them. This is a powerful tool in the arsenal of “checks and balances.” But the Legislative Branch - the Congress - has its own powers. It creates laws – and as mentioned above – can override a veto by the Executive Branch.

These provisions slow down the legislative process, but that is not a bad thing. Whenever we hear on the news that Washington is “gridlocked,” my wife usually says, “Good. That means they can’t cause any problems.”

Unfortunately, the Senate has over the years passed “rules” that would horrify the Framers of our Constitution. These men spent years studying the laws, constitutions, and governmental systems of other nations. They determined that a simple majority was the fairest and most judicious way to decide most issues. There are only a handful of issues in which more than a simple majority is mandated. One (overriding a presidential veto by a 2/3 majority of both Houses), found in Article I, Section 7, has already been described. The other situations are all extremely important, and weighty matters. Those that require a 2/3 majority vote (sometimes called a “supermajority”) or a 3/4 majority of the States include:
There are two other matters that require a supermajority which many people think are in the Constitution. They are actually found in Amendments to the Constitution.
I mention these details to emphasize that there were only a few very rare occurrences that our Founders believed required more than a simple majority. Impeachment, removing a member of Congress, or removing the president from office are all very big deals. Overriding a presidential veto and ratifying international treaties are hugely important. And anything that involves changing the Constitution – Congress passing a proposed Amendment, States calling for a Constitutional Convention or States ratifying an Amendment – all require majorities that are difficult to obtain.

Naming a war memorial, passing business regulations, authorizing Treasury bills – not so much. But these things – and pretty much everything else the Senate does – require a 60 vote supermajority. The House gets along quite well with a simple 51% majority. And the Senate used to, as well. So what happened that caused the Senate to be so dysfunctional that a political party that has the White House and a majority of both Houses of Congress can’t get anything done?

It’s called the 'Filibuster' – and it’s as stupid as its name sounds.

Again, most people think the Filibuster is in the Constitution. Americans really need to read that important document. Almost every place I speak I give out free copies of the Constitution. I usually ask how many people have read the Constitution. When few raise their hands, I ask why. The answer I hear most is that it takes too long. Then I show them a pocket Constitution and tell them they can read the entire Constitution plus the Bill of Rights in less than 40 minutes! And I ask them to raise their right hands and promise to read it.

If it’s not constitutional, where in the world did this monstrosity come from? The Filibuster is a result of a Senate rule that was conceived of as a way to ensure that minority opinions were heard and understood before the Senate voted on an issue. The first Filibuster took place in 1837. Filibusters were rare until 1917.

The rule stated that as long as a senator kept talking about the bill on the floor, a vote could not be taken. Until 1917, the Senate left ending the filibuster up to the Filibustering senator(s). When they felt they had been heard and understood, they could give up the floor and allow debate to move on to a vote. It sounds sensible, but there is always danger in allowing one individual to bring all deliberation to a halt.

In 1917, at the insistence of Democrat President Woodrow Wilson, the Senate adopted a procedure known as a “cloture vote.” Everything changed. Senators began “holding the floor” by talking non-stop – often about nothing. As long as they were talking, no other business could be done. By “Filibustering” any senator could prevent the entire Senate from voting on any bill. Passing the bill would require a Constitutional simple majority. But stopping the talking fool required a 2/3 majority vote (which was later changed to 3/5). This, in effect, subjected every bill to a vote of 60 senators before 51 of them would be allowed to vote to pass it.

Believe me when I say that the rest of the world laughs at us when they see the greatest Republic on earth brought to a standstill by a senator reading from the phone book or reciting poetry. That spectacle caused the Senate to allow just the threat of a Filibuster to block a bill from a fair up or down vote. This is why I said at the beginning that Republicans do NOT control Congress. They could – but Mitch McConnell won’t allow it. That’s why he must go. If Republicans don’t remove him from his position, we will have another three years of Democrats blocking Republicans from doing what the people sent them to do.

Think about it. Whether you are a Democrat or a Republican, it is obvious that the majority of Americans want Conservative legislation passed. If they had wanted Liberal control of our government, Democrats would be the majority in both Houses, and Hillary (shudder!) would be president. So does it make any sense for Democrats to obstruct duly elected officials from doing the people’s bidding?

Of course, Republicans have used the same technique when they were out of power. I hate it, but I can’t blame them. Consider that a bully had terrorized you for years. Then suddenly you had a growth spurt, and you were bigger than the bully. Would you take the opportunity for a little payback? Once Woodrow Wilson unleashed the Democrat bully, it was inevitable that when Republicans were in the minority they would want payback.

The sad thing is that we elected grown men and women to represent us in Congress, and most of them act like spoiled children. We have to break this cycle.

McConnell could end the Filibuster with a simple change of Senate rules. Once gone, no one would ever restore it – for the same reason that McConnell is afraid to end it. They call this the “nuclear option,” as if it were some huge change in the way government is done. But in reality, it is only going back to way government used to be done – before the travesty of the Filibuster.

Texas Senator Ted Cruz, who himself led a famous Filibuster during Obama’s Reign of Terror, now believes it should be done away with – forever. “As recently as even a couple years ago, if you had asked me, 'Should we get rid of it?’ I would have said ‘no,’ because it slows down the growth of government. That is no longer my view. There is nothing in the history of the Senate remotely like what we’re facing right now, which is the filibuster being used on everything. Their base, the hard radical Left, is demanding ‘Fight! Resist!’ And so, every substantive piece of legislation — virtually every one — gets filibustered.”

The Filibuster is on its way out. It’s just a matter of time before one party or the other has the courage to deal it its death blow. It has already been weakened. Most presidential nominations are no longer subject to a Filibuster. But ending the practice totally will almost certainly take place the next time the Democrats control the Senate. Former Democrat Senate Majority Leader Harry Reid has acknowledged that it has to go, and many Democrats agree with him.

Ted Cruz: “If the Democrats ever regain the majority, they’ll end legislative filibuster…And it doesn’t make any sense for it to be a one-way ratchet — for us to have our hands tied and for them to be able to pass [bills] with a simple majority.”

So why should Republicans keep it in place and allow Democrats to hamstring them when it is clear that they will not be able to use it when they are in the minority? Now we’re back to Mitch McConnell. Not only has he publicly stated many times that he would never end the Filibuster, he personally led hundreds of them. So he would look like a hypocrite if he did the right thing and ended it.

It’s time to put Mitch out to pasture. He has become increasingly ineffective. One of his main responsibilities is to act as a go-between for his members and the president. But he continuously opposes President Trump while pretending to work with him. Trump has called on him several times to end the Filibuster so the Senate can go to work, but he refuses.

I don’t believe Americans will continue to accept the proposition that they have to win the presidency, a majority of the House, and a supermajority of 60 votes in the Senate to get anything done. Mitch McConnell is the roadblock. I’m calling my only Republican Senator, Marco Rubio, to tell him it’s time to Ditch Mitch. How about you?

The Days of the Filibuster are Numbered
http://www.washingtonexaminer.com/the-days-of-the-filibuster-are-numbered/article/2647150