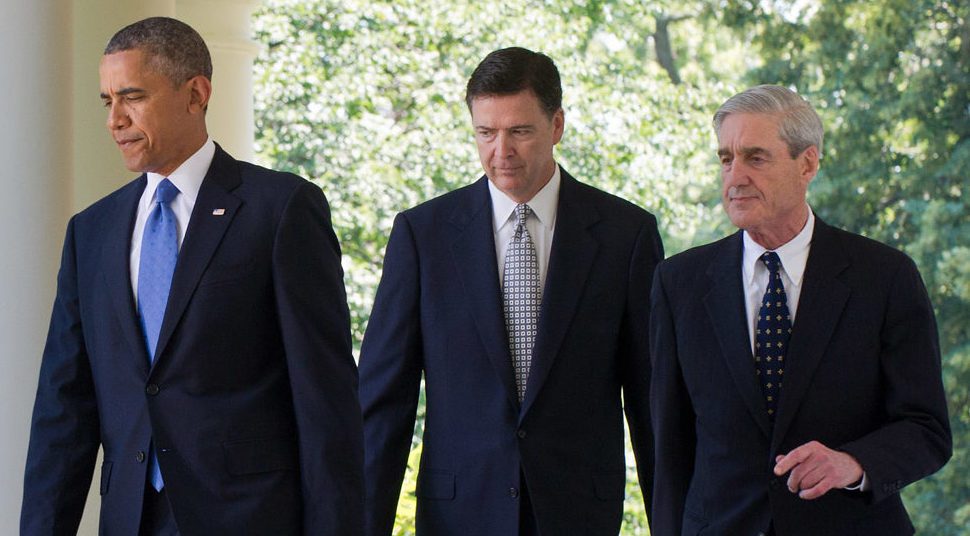 The House Intelligence Committee just released the “FISA memo.” It contains damaging information about the actions of the FBI and Department of Justice leadership under the Obama administration.

Republicans on the House Intelligence Committee voted on January 29, 2018, to release a four-page memo, authored by Rep. Devin Nunes (R-CA), which alleges that the FBI abused its power by spying on Donald Trump’s presidential campaign. President Trump authorized the release of the memo on February 2, 2018.

The FBI had requested that the names of FBI top leadership be redacted from the memo (presumably to protect the reputations of the guilty). The memo was released unredacted. Democrats made numerous claims that national security would be irreparably damaged by the release of the memo. I don't see a single national secret in the memo, nor do many national security experts who have reviewed it.

I suggest you read it and judge for yourself. Apparently, most of the Democrats who argued against its release have never read it. (It's only four pages, guys.)

Several of the statements in the memo could potentially derail special counsel Robert Mueller’s Trump-Russia investigation. Keep in mind that one of the key conspirators in this mess is the fired FBI Director, a close friend of Mueller. Also, don't forget that Mueller (a former FBI Director) came to Trump hat-in-hand and begged the president to give him Comey's job.

Shortly after Trump refused his request, the acting Attorney General, Rod Rosenstein, an enemy of the president, appointed Mueller to investigate the president and his team. It would be impossible for Mueller to fairly conduct an investigation, given his bias. Also, one of the key conspirators (and the man who leaked classified material in order to force Mueller's appointment) is none other than Mueller's BFF James Comey.


A FEW HELPFUL DEFINITIONS AS YOU READ THE MEMO:

FISA: The Foreign Intelligence Surveillance Act authorizes secret courts that many legal experts say are unconstitutional, since the accused cannot face his accuser, and the court only hears the government's version of events. These courts approve surveillance warrants pertaining to national security and foreign intelligence. The judges hardly ever deny the government's requests.

Dossier: A French word for "a large pile of horse or cow manure."


Here is a summary of the key points in the Memo:

The FBI used an unverified, biased document known as the "Steele Dossier" to get a warrant in October 2016 to spy on Carter Page, a former Trump campaign volunteer. This document was characterized by fired FBI Director Comey as "unverified and salacious" information. The document was prepared by a former British spy, Christopher Steele. It claims that there was "collusion" between then-candidate Trump and the Russians, although there is no reason given why such "collusion" would benefit either party - particularly since Hillary Clinton's political philosophy is much closer to that of the Russians than Trump's, and that Trump had promised to be tough on the Russians. The dossier was financed by the DNC (Democrat National Committee) and the Clinton campaign — which is obviously a huge problem. 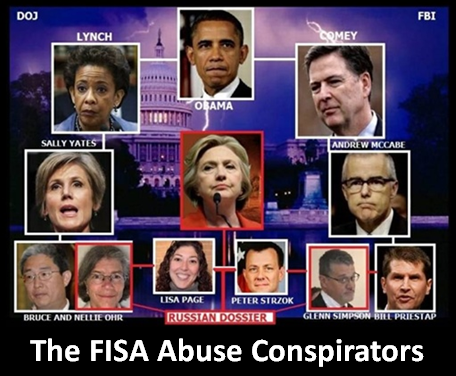 THIS IS THE FULL TEXT OF THE MEMO:

Declassified by order of the President
February 2, 2018
January 18, 2018
To: HPSCI Majority Members
From: HPSCI Majority Staff
Subject: Foreign Intelligence Surveillance Act Abuses at the Department of Justice and the Federal Bureau of Investigation

This memorandum provides Members an update on significant facts relating to the Committee’s ongoing investigation into the Department of Justice (DOJ) and Federal Bureau of Investigation (FBI) and their use of the Foreign Intelligence Surveillance Act (FISA) during the 2016 presidential election cycle. Our findings, which are detailed below, 1) raise concerns with the legitimacy and legality of certain DOJ and FBI interactions with the Foreign IntelligenceSurveillance Court (FISC), and 2) represent a troubling breakdown of legal processes established to protect the American people from abuses related to the FISA process.

On October 21, 2016, DOJ and FBI sought and received a FISA probable cause order (up; under Title VII) authorizing electronic surveillance on Carter Page from the FISC. Page is a US citizen who served as a volunteer advisor to the Trump presidential campaign. Consistent with requirements under FISA, the application had to be first certified by the Director or Deputy Director of the FBI. It then required the approval of the Attorney General, Deputy Attorney General (DAG), or the Senate confirmed Assistant Attorney General for the National Security Division. The FBI and DOJ obtained one initial FISA warrant targeting Carter Page and three FISA renewals from the FISC. As required by statute (50 U.S.C. 1805 (d)(1)) a FISA order on an American citizen must be renewed by the FISC every 90 days and each renewal requires a separate finding of probable cause. Then-Director James Comey signed three FISA applications. in question on behalf of the FBI, and Deputy Director Andrew McCabe signed one. Sally Yates, then-Acting DAG Dana Boente, and DAG Rod Rosenstein each signed one or more FISA applications on behalf of DOJ.

Due to the sensitive nature of foreign intelligence activity, FISA submissions (including renewals) before the FISC are classified. As such, the public’s confidence in the integrity of the FISA process depends on the court’s ability to hold the government to the highest standard, particularly as it relates to surveillance of American citizens. However, the rigor in protecting the rights of Americans, which is reinforced by 90-day renewals of surveillance orders, is necessarily dependent on the government’s production to the court of all material and relevant facts. This should include information potentially favorable to the target of the FISA application that is known by the government. In the case of Carter Page, the government had at least four independent opportunities before the FISC to accurately provide an accounting of the relevant facts. However, our findings indicate that, as described below, material and relevant information was omitted.

1) The “dossier” compiled by Christopher Steele (Steele dossier) on behalf of the Democratic National Committee (DNC) and the Hillary Clinton campaign formed an essential part of the Carter Page FISA application. Steele was a longtime FBI source who was paid over $160,000 by the DNC and Clinton campaign, via the law firm Perkins Coie and research firm Fusion GPS, to obtain derogatory information on Donald Trump’s ties to Russia.

a) Neither the initial application in October 2016, nor any of the renewals, disclose or reference the role of the DNC, Clinton campaign, or any party/campaign in funding Steele’s efforts, even though the political origins of the Steele dossier were then known to senior DOJ and FBI officials.

b) The initial FISA application notes Steele was working for a named U.S. person, but does not name Fusion GPS and principal Glenn Simpson, who was paid by a U.S. law firm (Perkins Coie) representing the DNC (even though it was known by DOJ at the time that political actors were involved with the Steele dossier). The application does not mention Steele was ultimately working on behalf of—and paid by—the DNC and Clinton campaign, or that the FBI had separately authorized payment to Steele for the same information.

2) The Carter Page FISA application also cited extensively a September 23, 2016, Yahoo News article by Michael Isikoff, which focuses on Page’s July 2016 trip to Moscow. This article does not corroborate the Steele dossier because it is derived from information leaked by Steele himself to Yahoo News. The Page FISA application incorrectly assesses that Steele did not directly provide information to Yahoo News. Steele has admitted in British court filings that he met with Yahoo News—and several other outlets—in September 2016 at the direction of Fusion GPS. Perkins Coie was aware of Steele’s initial media contacts because they hosted at least one meeting in Washington DC in 2016 with Steele and Fusion GPS where this matter was discussed.

a) Steele was suspended and then terminated as an FBI source for what the FBI defines as the most serious of violations—an unauthorized disclosure to the media of his relationship with the FBI in an October 30, 2016, Mother Jones article by David Corn Steele should have been terminated for his previous undisclosed contacts with Yahoo and other outlets in September—before the Page application was submitted to the FISC in October—but Steele improperly concealed from and lied to the FBI about those contacts.

b) Steele’s numerous encounters with the media violated the cardinal rule of source handling—maintaining confidentiality—and demonstrated that Steele had become a less than reliable source for the FBI.

3) Before and after Steele was terminated as a source, he maintained contact with DOJ via then-Associate Deputy Attorney General Bruce Ohr, a senior DOJ official who worked closely with Deputy Attorneys General Yates and later Rosenstein. Shortly after the election, the FBI began interviewing Ohr, documenting his communications with Steele. For example, in September 2016, Steele admitted to Ohr his feelings against then-candidate Trump when Steele said he “was desperate that Donald Trump not get elected and was passionate about him not, being president.” This clear evidence of Steele’s bias was recorded by Ohr at the time and subsequently in official FBI files— but not reflected in any of the Page FISA applications.

a) During this same time period, Ohr’s wife was employed by Fusion GPS to assist in the cultivation of opposition research on Trump. Ohr later provided the FBI with all of his wife’s opposition research, paid for by the DNC and Clinton campaign via Fusion GPS. The Ohrs’ relationship with Steele and Fusion GPS was inexplicably concealed from the FISC.

4) According to the head of the counterintelligence division, Assistant Director Bill Priestap, corroboration of the Steele dossier was in its “infancy” at the time of the initial Page FISA application. After Steele was terminated, a source validation report conducted by an independent unit within FBI assessed Steele’s reporting as only minimally corroborated. Yet, in early January 2017, Director Comey briefed President-elect Trump on a summary of the Steele dossier, even though it was—according to his June 2017 testimony—“salacious and unverified.” While the FISA application relied on Steele’s past record of credible reporting on other unrelated matters, it ignored or concealed his anti-Trump financial and ideological motivations. Furthermore, Deputy Director McCabe testified before the Committee in December 2017 that no surveillance warrant would have been sought from the FISC without the Steele dossier information.

5) The Page FISA application also mentions information regarding fellow Trump campaign advisor George Papadopoulos, but there is no evidence of any cooperation or conspiracy between Page and Papadopoulos. The Papadopoulos information triggered the opening of an FBI counterintelligence investigation in late July 2016 by FBI agent Pete Strzok. Strzok was reassigned by the Special Counsel’s Office to FBI Human Resources for improper text messages with his mistress, FBI Attorney Lisa Page (no known relation to Carter Page), where they both demonstrated a clear bias against Trump and in favor of Clinton, whom Strzok had also investigated. The Strzok/Lisa Page texts also reflect extensive discussions about the investigation, orchestrating leaks to the media, and include a meeting with Deputy Director McCabe to discuss an “insurance” policy against President Trump’s election.