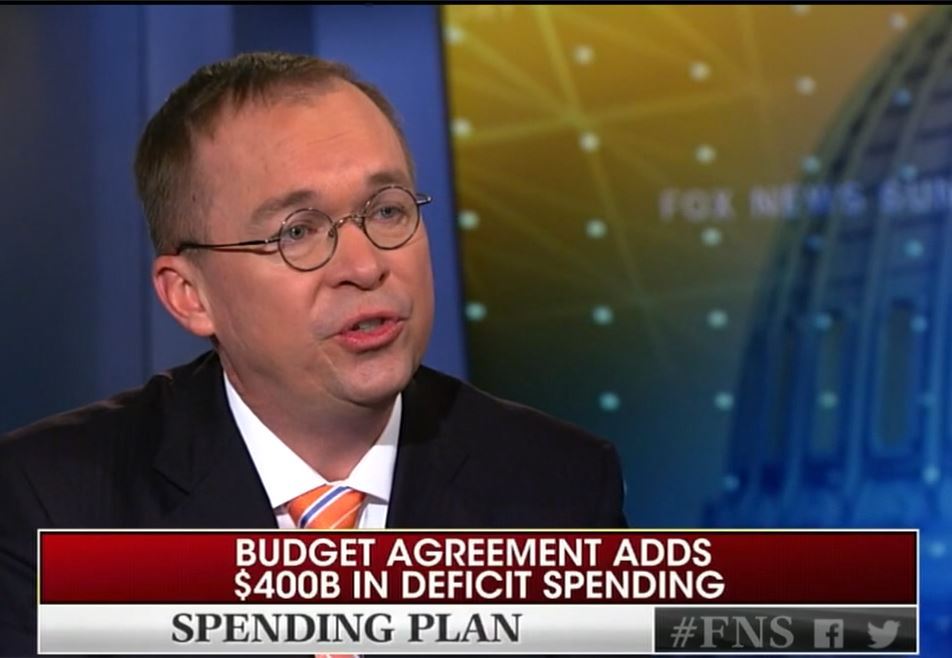 On Fox News Sunday today (February 18, 2018), one of my favorite commentators missed a major opportunity to ask a vital question of one of President Trump's key advisors. Wallace is known for asking tough questions of his guests, even when he knows asking them may mean that guest will never return. So why did he fail to ask The Question today?

It is a question if asked and acted upon that could change the entire course of the president’s next seven years, allow Congress to do its job, and guarantee continued Republican control of both Houses of Congress. It is probably the most important question anyone could ask the president or his staff. I don’t expect the Liberal news media to ask it because it is not in their interest for the American people to think along these lines. But as Wallace interviewed Trump’s OMB (Office of Management and Budget) Director, I was shouting at him to ask The Question.

Wallace mentioned the monstrous budget bill passed by the Congress and signed by the president this week. At $400 Billion, it was second only in size to the outrageous Obama bailout bill, which put the nation $700 Billion deeper in debt. (The true cost of the Obama bailout ended up being $8 Trillion, but that is a story for another time.) Wallace mentioned that this could end with $1 Trillion per year Obama-style deficits, and asked how Mulvaney could justify it.

Mulvaney said that most Americans believe that Republicans can do pretty much anything they want because they control the House, the Senate, and the White House. He claimed, “The truth is, because of the 60-vote rule in the Senate, we need Democrat support.” He went on to say that the Democrats would not “allow” one dollar of defense spending unless the Republicans gave them Billions for welfare.

Oh, the poor, desperate Republicans. They want so badly to do what is best for the nation, but the mean, nasty, stingy Democrats won’t “allow” them to do the right thing. It makes you want to cry, doesn’t it?

This is where Wallace could have (and should have) asked The Question: “Why don’t the Republicans just eliminate the 60-Vote Rule?” Excellent question! The only problem is that Wallace didn’t ask it. He went on to talk about details in the bill.

“Wait a minute!” you say. “Are you saying that the Republicans could simply eliminate the arcane, unconstitutional Senate rule that requires a 60-vote majority rather than a simple majority?” Yes, that is absolutely what I am saying. There is no reason why they shouldn’t eliminate it. The only advantage it gives Republicans is that they can use it to blame Democrats when they don’t do their jobs.

There are many reasons why they should eliminate it. Foremost among them is that they would have been able to pass this bill the way it should have been: Give the military back the funding that Obama took away, and cut rather than increase the “social spending” that is bankrupting our nation. Other reasons include getting nominees approved (wouldn’t it be great if all new Supreme Court nominees were Constitutionalists) and breaking the logjam in Congress. The other reason the Republicans are afraid to ditch the “60-Vote Rule” is that if the Democrats regain a majority, they will be able to use a simple majority to pass their legislation – the way the Founding Fathers intended.

What the Republicans don’t seem to understand is that Americans are sick and tired of the legislative games the Senators play. With their complicated rules and procedures, it is almost impossible for Americans to understand the legislative process. If Senate Republicans did away with the “60-Vote Rule”, they wouldn’t have to worry about the Democrats taking the Senate and the House because the citizens would appreciate the transparency and accountability. If they don’t revoke the rule, they could very well lose one or both houses in the mid-term elections.

Did you know that the House passes dozens of bills for every one the Senate approves? For instance, in 2017, the House passed 269 bills. The president signed 117 bills into law. But only a handful of those that the Senate passed were significant legislative actions. Most other substantive bills still languish, waiting for the “60-Vote Rule” to be abolished.

So who is the “bad guy” in this ridiculous game, the one that keeps the “60-Vote Rule” in place? Surprisingly, it’s not a Democrat. It is none other than Mitch McConnell, the Republican Senate Majority Leader. The president has asked him to revoke the rule, which he could quickly do. But he refuses to do so.

That is why I called on Senate Republicans to “Ditch Mitch” in my recent article, “Republicans Do NOT Control Congress – But They Can.” I strongly suggest that you read that article on Conservative Truth, to find out why the “60-Vote Rule” and the Filibuster are not just unconstitutional – they are ridiculous in a modern Republic.

And you might want to contact Chris Wallace at Fox News and strongly request that he ask The Question the next time he has a Trump Administration official in his hot seat. (Facebook.com/FoxNewsSunday or Twitter.com/FoxNewsSunday)