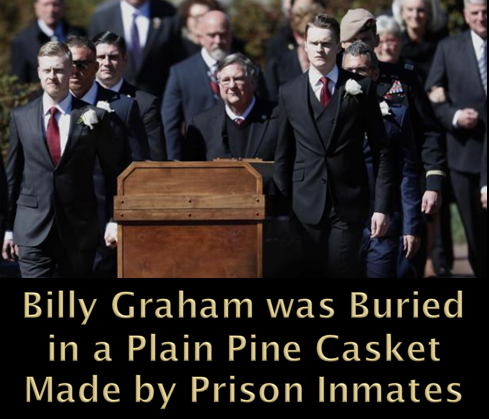 On Friday, March 2, 2018, FOX News provided live coverage of a historic funeral for almost two hours. The other networks glanced at it for between 30 seconds and two minutes. Why?

1) Billy Graham was the most famous evangelist and arguably the best-known Christian leader of the past century. But NBC didn't think it was important to air his funeral.

2) Rev. Graham was a spiritual counselor to twelve presidents - Democrat and Republican. Yet CNBC felt he was worthy of only 30 seconds of reporting.

3) The famous evangelist preached live to hundreds of millions of people in almost every nation in the world. But ABC blew off the millions who wanted to see his homegoing celebration

4) Dr. Graham was so beloved that he was one of only four private citizens in the history of our nation who laid in honor in the Capitol Rotunda. Yet CBS barely acknowledged his passing.

Why is it that the major networks provided bumper to bumper coverage of an English coronation and a New York dog show, yet they make the barest of mentions of the funeral of one of the greatest men who ever lived in America? And why was FOX the only network to provide complete coverage to a nation that was really interested in seeing it?

It's simple. Most of FOX News' commentators are Christians, so they are in touch with the feelings of the vast majority of Americans. By contrast, it is difficult to find a single Christian in the newsrooms of the other networks. They are so out of touch with America, that they think we would rather watch soap operas or reruns of sitcoms than honor a man who is widely known as "America's Pastor."

The funny thing is that I don't believe Billy Graham would have cared. Although he was known worldwide and sought out by leaders of all kinds, he was a very humble man. He left strict instructions for his funeral. He wanted to be buried in a simple pine casket. And - although it could have been held in the resplendent National Cathedral - he wanted the service to be held in a tent - just like his early crusades.

If most of the news anchors in the United States were to be asked to draw a map of America, it would only contain New York City, Washington, DC, and Hollywood. Only the people in those three corrupt cities matter, in their feeble minds. The opinions of citizens who don't live in one of those three cities are simply of no consequence to them. So they ignore the rest of us - whom they consider 'The Deplorables.'

They actually think they are so important that if they don't cover it, it essentially ceases to exist. But the huge majority of Americans loved and honored Billy Graham. We will continue to keep his memory alive - in spite of the best efforts of the mainstream media.