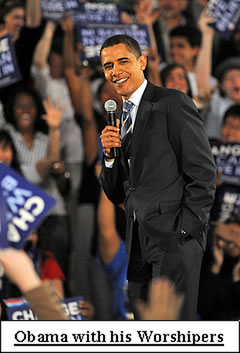 It absolutely blew me away. McCain made a statement about the Russian aggression against Georgia, so Obama had to respond. He was vacationing in Hawaii, but he realized he had to break away long enough to say something, since the situation with Russia and Georgia was growing more serious by the hour. So he said something stupid. "We should push for a Security Council Resolution to end the violence." Even middle school kids know that Russia has veto power on the United Nations Security Council. But Obama doesn't understand this most basic principle of international politics. Getting a UN Security Council Resolution condemning Russia's murder of innocent Georgians is as likely as getting Iran's Muslim clerics to condemn terrorism.

Now, maybe these students are smarter than the average student. But shouldn't someone who lusts to be the leader of the free world know at least as much about the United Nations as these kids? The VERY Junior Senator from Illinois proves every day that he is woefully unprepared to lead a village, much less the most important nation in the world.

I'm sure Obama's supporters will be quick to say that this was just a slip of the tongue, similar to the time when he mistakenly spoke of the 57 OR 58 states in the United States. (On May 9, 2008, in Bremerton, OR, Obama said, "I have now been in 57 states; I think one left to go." See LINK below for VIDEO proof of this quote.) I agree that when he seemed not to know how many states made up the nation he proposes to lead, he was talking without notes. Even a Socialist like Obama must know the number of states in the U.S., right? But when he made his idiotic remarks about a United Nations resolution against Russia, he was reading a prepared statement from notes. (Watch the VIDEO - see LINK below.)

McCain also spoke of a UN Security Council resolution, but he was clear that we should push for one to shame Russia, in spite of the fact that Russia would veto it. Obama clearly thought a binding Resolution was possible.

Obama's exact words: "We should continue to push for a United Nations Security Council Resolution calling for an immediate end to the violence." If he had known that Russia had veto power, he would have also known (as McCain obviously does) that it would take a long time and a lot of political maneuvering just to get a Resolution considered. After it came up for discussion, Russia would crush it. So Obama's naÃ¯ve idea of a Resolution resulting in "an immediate end to the violence" was clearly an impossible dream - even to a well-educated school child.

That was not his only gaffe during this statement. In less than four minutes he managed to disgrace himself no less than ten times. His mistakes included statements that made it clear that he has no understanding of international matters, misleading statements and outright lies.

The following are exact quotes from the statement Obama read. You can hear the whole statement by clicking the VIDEO LINK below.

His worst lie was "For many months I have warned that there needs to be active international engagement..." regarding the situation in Georgia. As distasteful as it is for me, I listen to every public statement this two-faced man makes. It is possible I might have missed one, or even two statements he made regarding Georgia. But if he had been warning America "for many months" I know I would have heard it. My guess is that this is the first time he ever heard of the nation Georgia. It has been reported that when he heard that Russia had attacked Georgia, his response was, "Is Atlanta OK?" While this is obviously a reporter's joke, the reason it is so funny is that it is very close to the truth.

Obama then called for "a high-level and neutral international mediator." Again, his naÃ¯vetÃ© is front and center. What mediator would Russia listen to, and what power would such a mediator have to enforce their mediation? By the time Obama made this statement, France had already brokered a cease-fire, to which Russia agreed. They used the period after the cease-fire, which Georgian troops honored, to move Russian troops and tanks into better positions from which to take over Georgia.

"Russia has now violated the space of another country." Obama, that's what teenagers say when someone gets too close to them, as in "You've violated my space, Dude." In international diplomacy the proper terminology would be, "Russia has violated the territorial integrity of a sovereign nation."

"There is also an urgent need for humanitarian assistance." Obama made this misleading statement after President Bush had already sent planes bearing humanitarian aide to Georgia. By making this statement, he hoped that listeners would believe that Bush had sent aid in response to Obama's request (just as one of his campaign workers later implied that Russia had agreed to a cease-fire because Obama had requested it).

"The United States, Europe, and all other concerned countries must stand united." Somebody needs to tell this guy that Europe is not a country. This is embarrassing.

"There should also be a UN mediator to address this crisis." My statement above addresses this, as well. In addition to being a corrupt organization, the majority of whose member nations hate the United States, freedom, and democracy, the UN has absolutely no power with which it can restrain Russia.

"We should also convene other international forums to condemn this aggression." What international organizations might convene such forums, Barack? The Socialist International (an association of all the world Communist and Socialist parties)? The African Union? What about the International Table Tennis Association?

"This action is wholly inconsistent with the Olympic ideal." Now you've got something, Barack. I'm certain that the horror of having his actions considered "inconsistent with the Olympic ideal" has Russian Prime Minister Vladimir Putin hanging his head in shame. The "former" KGB butcher is proud of his actions in Georgia. He plans to bring the whole region back under Russian control, and he couldn't care less whether his puppet, President Medvedev, likes it.

That's Obama's biggest mistake. In Diplomacy 101 you learn that you must know who has the power. Obama doesn't know who the players are. As I mentioned above, he had one of flunkies take credit on his behalf for the cease-fire (before he realized that it would fail). Governor Tim Caine (D-VA) hopes to be Obama's Vice-Presidential running mate. On August 12 he made this statement at a news conference: "I'm very, very happy that the Senator's request for a cease-fire has been complied with by President Medvedev."

There are just a few things wrong with Obama taking credit for the cease-fire. First, Medvedev doesn't have the power in Russia, and Obama doesn't understand this basic fact. When Putin was nearing the end of his second term as President of Russia and couldn't run again due to term limits, he arranged for Dmitry Medvedev to become his successor. As agreed, Medvedev appointed Putin Prime Minister the day he took office. He has been taking orders from Putin ever since. The aggression against Georgia has been run completely by Putin, with Medvedev watching from the sidelines.

Second, Obama has no right or standing to make "requests" in international matters. He is not even his party's nominee officially, and if he were, candidates who care about America have always followed the rule that America only has one president at a time. Even if they have already been elected but not yet sworn in, future presidents know not to meddle in foreign policy.

Third, the phrase "complied with" in the statement, "The Senator's request for a cease-fire has been complied with by President Medvedev," is a terrible choice of words. It implies that Obama has the authority to command and that Russia has the obligation to "comply" with his dictates. No diplomat or international negotiator would ever use such a phrase unless he had the authority to back them up. Obama is such an amateur that he doesn't understand this basic concept.

As I watched Obama's press conference coming to an end, I fully expected him to lead the reporters in a chorus of "Kumbaya," or perhaps to cry, "Why can't we all get along together?" ala Rodney King. The fact is that although he is a middle aged man, he is as clueless and naÃ¯ve about international relations as a pot-smoking teenager.

Obama didn't take any questions following his statement. That was the only smart move he made the whole day. Perhaps that would be the best overall campaign strategy for Obama. He might actually win if he just keeps his mouth shut until Election Day.

Obama Flip-Flops on Georgia: From Internationalist to McCain-Like Warrior...in 24 Hours!

An Amateur's Illogical and Uninformed Ramblings: Obama on Georgia

LA Times: VIDEO of Obama Talking about the 57 (or 58) States in Our Nation

Article: "Barack Obama Wants to be President of these 57 United States"