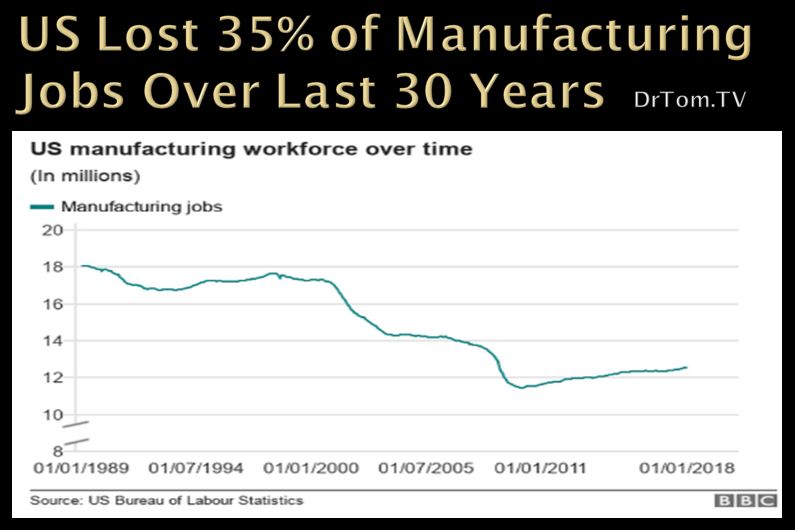 I despise the Democrat Party and all it stands for. I put up with the Republican Party. I don’t respect either. So when I see both parties pulling out all the stops to block something, I automatically assume that it’s good for America. President Trump’s efforts to even the playing field on international trade are good, and much needed. For far too long our “friends and allies” have been taking advantage of the United States, and frankly stealing from us. I salute the president for keeping this campaign promise.

I am a Christian Constitutionalist and a Conservative. For many years the Republican Party has been against tariffs. So when a Conservative approves of tariffs, he’s considered a traitor by Republicans. That makes as much sense as a Democrat who is pro-life being denounced by the Democrat Party. The parties don’t own us. We are allowed to think for ourselves.

The Republicans are bemoaning Trump’s 25% tariff on imported steel and 10% on imported aluminum because it goes against Republican orthodoxy. The Democrats are against it because Trump is for it. If the president came out tomorrow in favor of forcing all American workers to join a union – something the Democrats would normally salivate over – they would be against it just because Trump proposed it.

Let’s look at the reasons the president has proposed this sensible move, and try to keep the politics and emotions out of the discussion. If you are OK with facts and keep an open mind, I’m confident you will see the importance of what the president is doing. 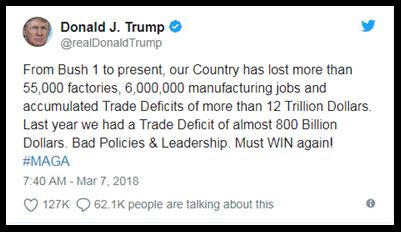 First, let’s look at the big picture. Our international trade deficit in goods is not just $800 Billion. It’s $800 Billion each year. The total accumulated trade deficit in goods is $12 Trillion. Trump’s detractors say that none of that is true. They say the accumulated deficit is slightly less than $12 Trillion, and that the yearly deficit is “only” $566 Billion. (They base this on the fact that the US has a surplus in services, and they think that should be subtracted from the deficit in goods.) So what? Even if you calculate it their way it’s still Billions of dollars every year.

In addition to this terrible trade deficit, the US has lost 55,000 factories and 6 Million manufacturing jobs. If we continue down this road to ruin, we will have no manufacturing base whatsoever.

You may say, “That doesn’t bother me. I’m not a factory worker. I work in computer technology.” It would bother you if you understood that manufacturing has always been the backbone of our economy. When we have to buy almost everything we need from other nations, we lose jobs, and ultimately we will pay more for our goods. “But I thought things made in China were cheaper.” That’s true – at the moment.

But I’m old enough to remember when we said the same about Japan. We looked down at products with the label “Made in Japan.” They were cheap – but they were also shoddy. Just like the junk we buy from China today. But after Japan ruined our electronics industry, the prices of Japanese good soared – because they were the only game in town.

How did this happen? In the 1950’s there were 150 television set manufacturers in the US which turned out tens of millions of sets. We were the world’s largest manufacturers of TV’s. Now two of the three largest companies (Samsung and LGE) are in South Korea; the third – Sony – is in Japan.

Today no TV’s are manufactured in the US. There are a handful of companies that assemble TV sets made totally of Asian components. But together they are responsible for just 1% of all TV’s bought in America. Walmart buys their TV’s from a South Carolina company named Element. They are shipped in boxes with large red, white and blue labels that proclaim, “Assembled in America.” But the small print tells the truth: “Made in China.”

And TV’s are just one of the hundreds of products that are no longer made in the US due to unfair trade practices.

The second inconvenient fact is that the production of industrial metals – particularly steel and aluminum – are essential to our National Security.

Let’s look first at aluminum. Of the five largest producers of aluminum, the US is fifth. We used to be first. In 2000 we had 22 smelters that produced aluminum. Today there are just 8 smelters in the US, of which only four actually produce aluminum. The worst news is that we now have only one smelter that produces the high-purity aluminum required to build military aircraft.

What does that mean for the ability of the American military to defend us? Remember a few years ago when it was revealed that essential electronic components for key military weapons were only available from China? That’s fine as long as we’re getting along with China. But what if we are at war with them? Do you think they will ship us the parts we desperately need to fight them?

The sad fact is that as our ability to produce aluminum is decreasing by the year, the use of aluminum has gone up dramatically. The industry is poised to experience a quantum leap in usage. Aluminum is now replacing steel in the auto industry in several key areas. For instance, the best-selling truck in America is the Ford F-150. Ford advertises that the F-150 has a “high-strength, military-grade aluminum alloy body.”

Meanwhile, China opens up several new aluminum smelters every year. They now produce 50% of the world’s commodity-grade aluminum. How are they able to grow exponentially and at the same time drive US Aluminum companies out of business? They are heavily subsidized by the Chinese Communist government – using the money they got from flooding the US markets with cheap goods. Walmart, by buying almost exclusively Chinese goods, is subsidizing the destruction of American manufacturing, and the decline of our military readiness.

Now let’s talk about steel. What is steel used for? Heavy machinery, building construction, manufacturing equipment of all types, bridges, military hardware such as tanks – the list goes on and on. We cannot survive as a nation without steel.

We play by the rules of international trade, while the Chinese government-owned and operated steel industry eats our lunch. They manipulate their currency to put America at a disadvantage. And they ignore trade laws and international agreements. That’s one reason why I was so proud of the president when he removed us from the disastrous TPP agreement that Obama got us into. It benefited Asian nations, particularly China, while punishing the US.

How does the decline in the US steel industry impact our National Security? Let’s look at just one vital area out of hundreds we could discuss. Armor plate is essential to tanks, personnel carriers, combat helicopters and dozens of other systems. Only one plant in the US produces this special type of plating – and it has to get its steel from China.

I was surprised to see the article on the crisis in the steel industry on the CNN website. In part, it stated, “This is a critical time for the American steel industry. For 150 years, the steel industry has played a central and indispensable role in building this nation. It now needs and deserves the support of Congress.” Amen.

Third, we need to look at the economic impact of unfair international trade practices toward the US. In 1962, Congress passed Public Law 87-794 which gave the president the authority to adjust the nation’s trade practices in order to protect both our economic welfare and our national security. It read, in part:

“In the administration of this section, the director (of the Office of Emergency Planning) and the president shall further recognize the close relation of the economic welfare of the nation to our national security, and shall take into consideration the impact of foreign competition on the economic welfare of individual domestic industries; and any substantial unemployment, decrease in revenues of government, loss of skills or investment, or other serious effects resulting from the displacement of any domestic products by excessive imports shall be considered, without excluding other factors, in determining whether such weakening of our internal economy may impair the national security.”

One example of how unfair trade impacts our economy is the fact that the steel industry provides hundreds of thousands of well-paying jobs to Americans. We’re losing these jobs to China, South Korea, Mexico, and other steel exporting nations. Over 12,000 steel jobs were lost in just the past year. Every steel job lost costs America another four to five “downstream” jobs (jobs that support the steel industry). So we really lost 50,000 to 60,000 American jobs. If you believe, as I do, that economic security is the most important component of national security, then you should be concerned about the trend of exporting US jobs, which shrinks our tax base and creates even more National Debt.

Admiral Michael Mullen, then the Chairman of the Joint Chiefs of Staff, said in 2010, “The most significant threat to our national security is our debt…That's why it's so important that the economy moves in the right direction because the strength and the support and the resources that our military uses are directly related to the health of our economy."

Finally, let’s discuss the ideas of “free trade” and “fair trade.”  Opponents of the tariffs to help bring fairness to international trade claim that Trump is a “protectionist” who opposes free trade. Free trade is defined as “international trade left to its natural course without tariffs, quotas, or other restrictions.” What we have today is obviously not free trade by any definition. US manufacturers and other exporters are punished by tariffs and quotas by many nations we consider to be friends in other areas, such as mutual defense. Many of the nations that treat us unfairly also receive foreign aid from the US.

Fair trade, on the other hand, is trade in which all parties treat each other in the same way. This is very rare to find, and it is hardly ever seen when the United States is party to the trade. This is partly our fault.

After WWII the United States put in place trade agreements that benefited other nations and penalized America. Most of the world – enemies and allies - had experienced significant economic losses. Our losses were much smaller, since we entered the war late, and since no battles were fought on our soil. We spent a lot of money helping our allies, but they were hurt far worse than we.

We have always been a generous nation, so we allowed unequal trade to take place as a way of strengthening other nations. We also implemented the Marshall Plan, which basically rebuilt Europe with US money. And we even helped our enemies – particularly Japan and Germany – to rebuild.

The need for those inequities has come and gone. The nations who have benefited from our generosity have come to feel that they deserve preferential treatment. Now is the time to level the playing field and treat America fairly.

Reuters: Is the Curtain Coming Down on US Aluminum Smelting?
https://www.reuters.com/article/us-aluminium-us-home/is-the-curtain-coming-down-on-u-s-aluminum-smelting-andy-home-idUSKBN0TD1GX20151124

CNN: The Crisis Facing the US Steel Industry
https://www.cnn.com/2016/03/23/opinions/american-steel-industry-gibson-schmitt/index.html