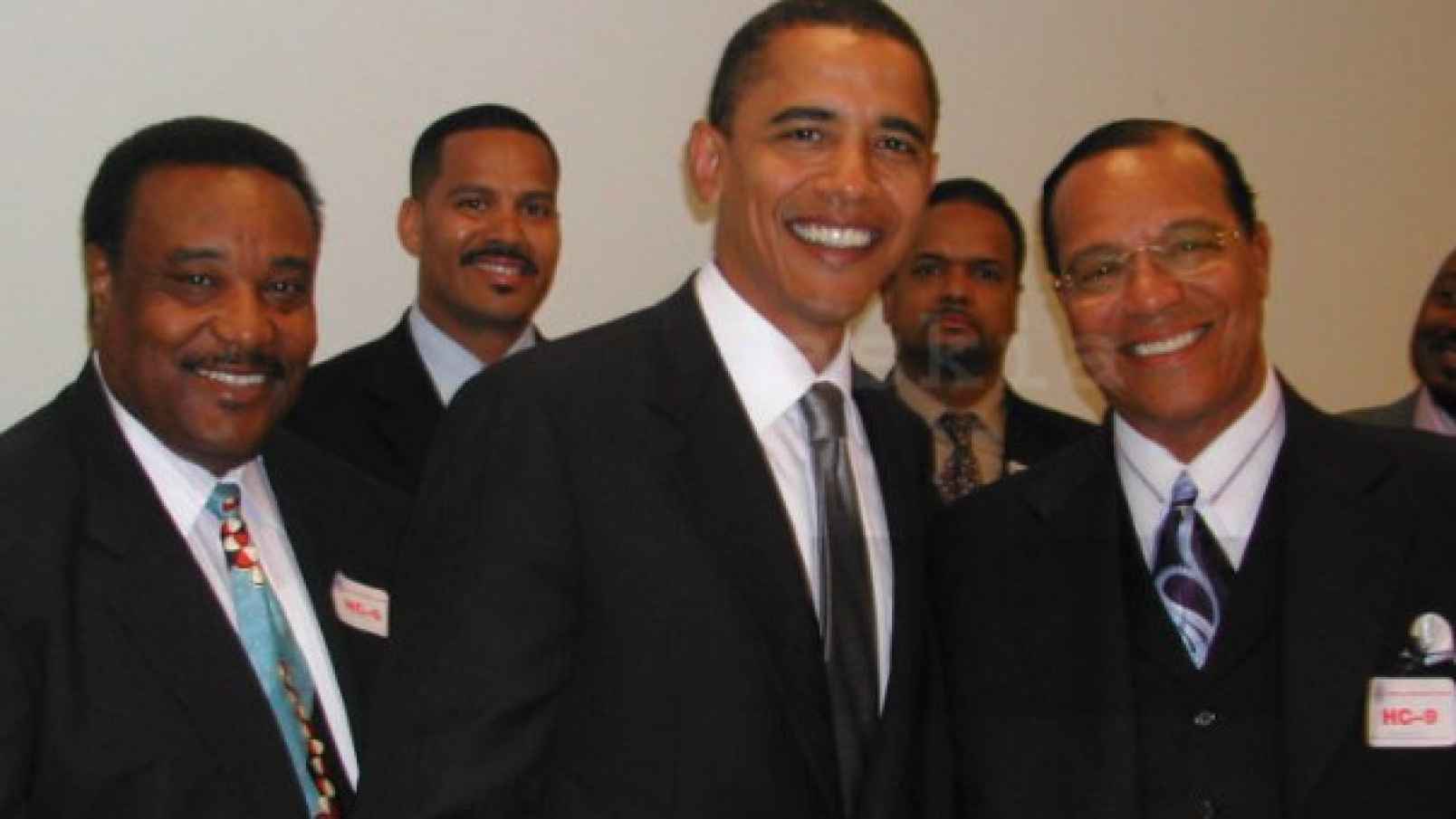 Why was this photo covered up by the Congressional Black Caucus (CBC) for over ten years? Because it showed them and their messiah enjoying fellowship with one of the most evil men of this century – Louis Farrakhan.

Rev. William Owens, president of the Coalition of African-American Pastors (CAAP), joined civil rights leader Dr. Alveda King and other black leaders in February to publicly rebuke the CBC as a “disgrace” and “traitors” to black Americans.

Why would the CAAP and conservative black leaders speak so strongly against a Congressional group that is supposed to represent them? For several reasons:
Louis Farrakhan is the leader of the “Nation of Islam.” He calls himself “Minister Farrakhan” and uses Biblical rhetoric in his long rants, but he is anything but a minister. Here are some infamous Farrakhan quotes that demonstrate that he hates Jews and that he encourages his followers to kill white people – particularly police:

“The Jews don't like Farrakhan, so they call me Hitler. Well, that's a good name. Hitler was a very great man.”

“You Jews are wicked deceivers of the American people. You have sucked their blood.”

"The satanic Jews have stolen your country."

“White people are potential humans – they haven’t evolved yet.”

“The white man is going down!”

“There really can be no peace without justice. Anarchy may await America.”

“It appears that there is a genocidal plan against black people.”

“Many of the Jews who own the homes, the apartments in the black community, we consider them bloodsuckers because they took from our community.”

“I think about all the hell I go through from my own people. A bunch of silly Negroes want to go and fight me.”

“Don’t talk to me about loving my enemies.”

“We know that the crime of 9-11 was not committed by Arabs or Muslims. It was an inside job. It was done by our own government and our own banking system.”

“We must rise up and kill those who kill us. Stalk them and kill them and let them feel the pain of death that we are feeling.”

“You are not now, nor have you ever been, a citizen of America. You are a slave to white America.”

“The Mother Wheel is a heavily armed spaceship the size of a city, which will rain destruction upon white America but save those who embrace the Nation of Islam.” 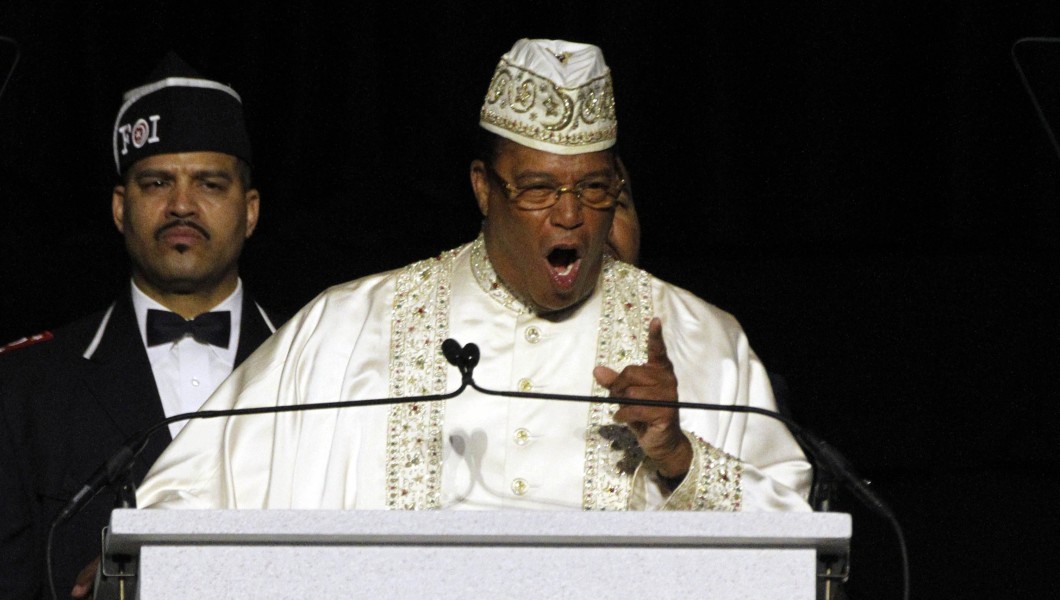 “My god will wipe America from the face of the earth.”

It’s no wonder that patriots, both black and white, have called for the resignation from Congress of the CBC members who support Farrakhan. Not a single member of the CBC would even denounce Farrakhan’s racist, anti-Semitic, and frankly crazy rants. They all support him because of the following he has among the most extreme blacks in the country.

One of the Congressmen who was in the photo with Obama and Farrakhan is not just a member of the Congressional Black Caucus – he is also the Vice-Chairman of the Democratic National Committee (DNC). At least seven members of the CBC are known to have direct ties with Farrakhan. The DNC, which is supposed to represent all Democrats, has also refused to denounce, or even criticize, Louis Farrakhan. By staying silent, they align the entire Democrat Party with its lunatic extremist fringe of radical Muslims.

The photographer who took the Obama-Farrakhan-CBC photo worked for the Nation of Islam publication in 2005. He said he suppressed the photo for 13 years at the request of CBC Democrats who wanted to protect Obama’s presidential campaigns. I wonder if it would have made a difference in either of Obama’s elections had it seen the light of day. Perhaps the nation would have been spared eight years of misery.

If, as the American people believe, Congress is bad, the Democrats are worse. And the Congressional Black Caucus is worst of the worst. Not because they’re black, but because they are extremists who support evil people like Farrakhan.

The CBC should be forced to change its name because it doesn’t represent Congressional Blacks - only Democrats. There has never been a Republican member of the Caucus, although there are many black Republicans. The CBC shouldn’t be allowed to imply that they represent all the blacks in Congress.

They don’t even represent blacks in general, as the coalition of black pastors demonstrates. I have watched many “man on the street” interviews with blacks who were asked by a black reporter if they aligned themselves with the extremist views of the Congressional Black Caucus and in particular the vile words of “minister” Farrakhan. Not one supported his calls to stalk and kill white people, particularly police officers. None agreed with the lie that Jews were wicked people from the “Synagogue of Satan” who were “sucking their blood” and planned to kill all black people. None even agreed with the CBC’s stated position that blacks should be afraid of their police.

Most blacks in this nation are Christians and have a patriotic, constitutional view of the nation – the opposite of the view of the CBC and Farrakhan (who declared that His God will destroy America). Since the CBC and their fellow traveler Farrakhan foment racial hatred and division, why do good black Americans typically vote Democrat?
First, because of family tradition. Up until Eisenhower’s election, the black vote was evenly distributed between the two major parties. In fact, the NAACP stated in 1926 that, “Our political salvation and our social survival lie in our absolute independence of party allegiance in politics.” But since Eisenhower, blacks have voted Democrat increasingly. The fact is that the Democrats excel at propaganda.  They have convinced most blacks that they are the party that supports African-Americans, and so blacks have simply followed the voting tradition of their parents and grandparents.

Of course, anyone who understands history knows the opposite is true. The Republican Party abolished slavery, against fierce opposition from Democrats. A Republican president, Dwight Eisenhower, sent federal troops to forcibly integrate public schools. Again, the Democrat Party did everything they could to fight the civil rights movement.

The second reason is that for some reason blacks tend to vote party rather than policy. For instance, the majority of blacks, particularly Christians, oppose both abortion and homosexual marriage. Yet they vote for the party that kills as many babies as possible – particularly black babies – and fights tooth and nail for homosexual perversion (which most blacks despise).

In 2012, for example, about the same percentage of black voters identified themselves as conservative as those who said they were liberal. Yet 93% of them voted for the reelection of Obama. Of course, part of that is due to the fact that Obama was half black. But studies have shown that party is more important to black voters than race.

A black professor named Theodore R. Johnson studied this phenomenon of blacks voting for Democrat candidates who don’t share their beliefs. For instance, millions of black Christians who despise abortion and hate the idea of homosexual marriage voted for Obama – who champions baby-killing and courted the homosexual vote. They knew he would govern in a way that violated their core beliefs, but they still voted for him.

Professor Johnson’s article (linked below) gives some insight into this puzzle. He thinks that the reason morality and beliefs lose out to party in the voting decisions of blacks is that they vote to defend their community. They see the Democrat Party as their champions, even though – as many black leaders have stated – the Democrats court them at election time, and then forget about them until the next election.

Fortunately, the black vote is not monolithic; many vote their beliefs rather than blindly voting Democrat. This is particularly true in certain demographics. For instance, Johnson notes that middle-class blacks are more likely to vote Republican. They tend to believe that hard work and diligence empower them, and they know that Republicans encourage entrepreneurship and the type of education that helps lift people out of poverty. Clinton got 5% less of the black middle-class vote than Obama. Age makes a difference, too. Young black voters (aged 18-29) gave Hillary 10% less of their votes than Obama received. The biggest determiner was education. Black men with college degrees voted for Clinton 15% less.

Even with these encouraging signs, the majority of blacks will continue to vote Democrat until they are better educated in these areas: Black parents, ask yourselves this question. Do you want your children influenced by a political party heavily influenced by hateful people like “pastor” Jeremiah Wright and Louis Farrakhan? These people encourage the mass killing of Jews, all whites and police officers. They believe that the United States government destroyed the Twin Towers on 9-11. If you don’t care about such things, keep voting Democrat.

Some younger readers may not know the name Jeremiah Wright. He was Obama’s pastor for more than 20 years, and heavily influenced the young Socialist. Wright, who claims to be a Christian pastor, had the despicable Black Muslim Farrakhan in his pulpit many times – while Obama was in the audience. (Obama claims he didn’t know about these frequent guest performances by Farrakhan.) Wright preached racial hatred, saying – among other things, “Jesus was a poor black man who grew up in a country run by rich white people.”

Wright believes that America deserved 9-11. He said from his pulpit, “People say, ‘God bless America.’ No, no, no, no! I say God damn America!” Obama claims he didn’t know about that, either. In fact, when he was running for president, he claimed he hardly knew Wright and didn’t know what he taught. But if you watch the video linked below, you’ll hear from his own lips that he lied about that, too.

You may think I’m not qualified to have an opinion on this subject because I’m white. But you don’t have to be black to recognize evil black people like Farrakhan, Wright, and the CBC. Evil can be found in every color. And everything I have said here I have also heard from black pastors, commentators, and political leaders. As a nation, black and white, we need to call out evil, bigotry, hatred, division, and racism wherever we see it. And we need to expose those – like the Congressional Black Caucus – who encourage and support it.

Articles about the CAAP (Coalition of African American Pastors)
http://www.breitbart.com/tag/coalition-of-african-american-pastors/

Official Website of the Coalition of African American Pastors
http://caapusa.org/

Why are African-Americans Such Loyal Democrats When they are so Ideologically Diverse?
https://www.washingtonpost.com/news/monkey-cage/wp/2016/09/28/can-trump-win-black-votes-what-we-know-from-5-decades-of-black-voting-data/?utm_term=.ff0d9292410c