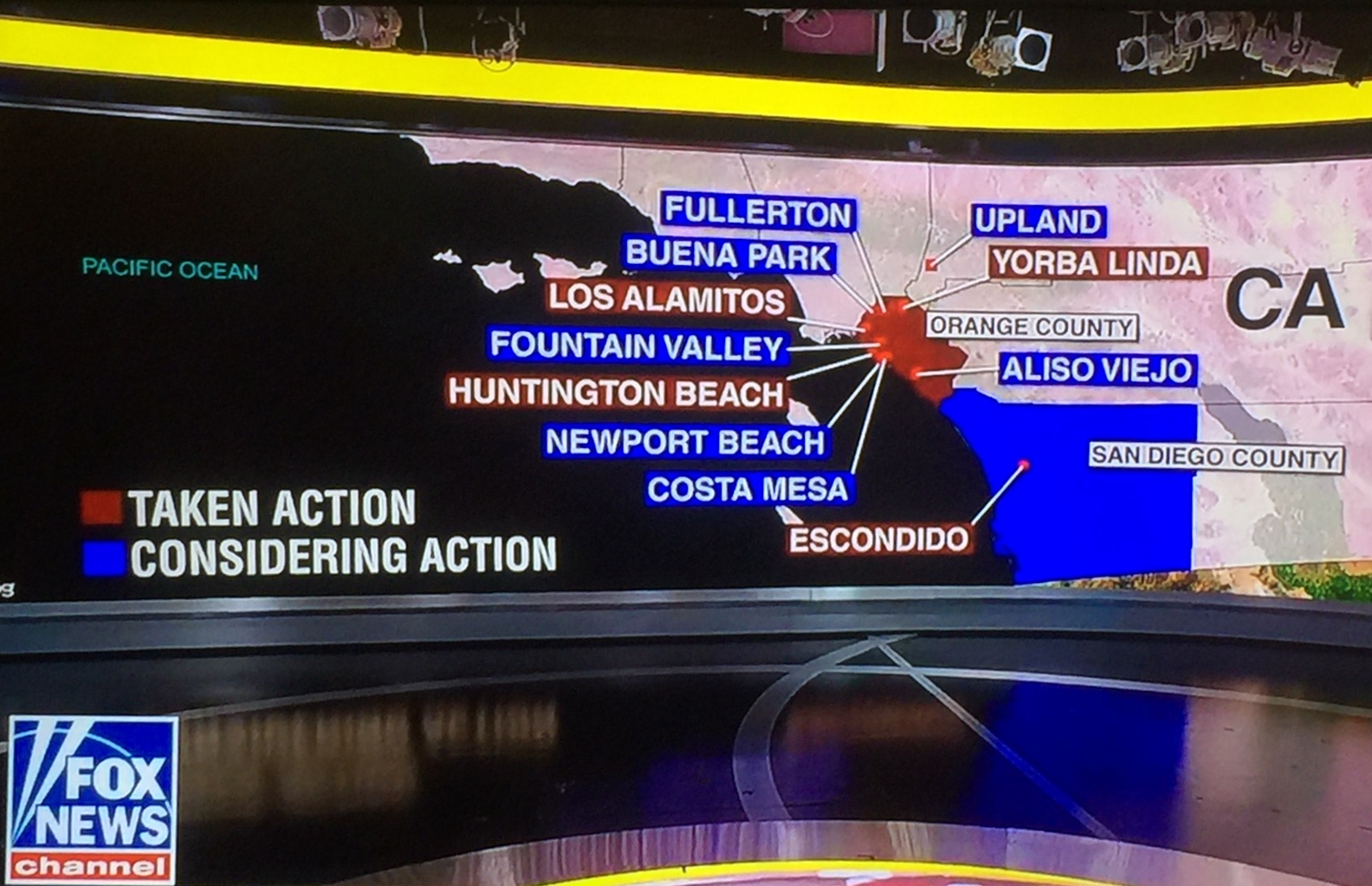 The Hill published an interesting article in February 2018 about a group of California Democrats who have filed papers to create a ballot initiative that would allow California voters to completely leave the United States of America. If the initiative gets enough signatures, the vote would take place in 2021. The “Calexit,” as it’s called, is driven by deranged “Never-Trumpers” who still can’t believe that Donald Trump is our president.

The purpose of this column is to discuss a less overt, more passive-aggressive method of secession that has a much greater chance of success. It is designed by its supporters to have California remove itself from any control from the federal government while still enjoying all the benefits of being part of the Union.

The Golden State has already made moves in this direction by joining the marijuana revolution. Like other states, California has made possession of marijuana legal at the same time federal law makes it a crime to possess the drug. An uneasy truce is in place in which pot is openly sold and used, with the knowledge that federal agents could bust and jail the dealers at any time.

That’s small-time compared to the latest outrage from the state of fruits and nuts, in which one of the biggest nuts, Democrat Governor Jerry “Moonbeam” Brown has led the charge to declare California a “Sanctuary State.” He signed SB54 into law on October 5, 2017, which made it illegal for California police officials to cooperate with federal officials in the enforcement of US immigration law. In effect, California has joined with illegal aliens in declaring war on the United States of America.

However, there is another side to the issue of State’s Rights. That is the fact that the Founding Fathers granted to the central government certain rights that supersede those of the States. These are called the “enumerated powers.” These powers are few and limited.  But they are real and must be respected if we are to avoid becoming 50 warring tribes that happen to share the same geography.

Without getting into a long discussion of the Constitution and the workings of the US government, I will simply state what anyone who has studied the Constitution and US Supreme Court rulings understands. The Executive Branch of the US government has the sole and absolute power to prescribe and enforce US policies of foreign relations and immigration.

Of course, under the Constitution Congress has influence over these matters and works with the Executive to shape them. But nowhere does the authority exist for cities, counties or even States to change US immigration law or to impede enforcement of our laws. Yet “Sanctuary” cities, counties, and now one State have done just that.

Let’s try an analogy that even the extreme Left should be able to understand.

Most schools have some form of “Student Governance.” These student bodies can take the form of actual student governments or student courts. The purpose of these organizations is to help students understand governance and its workings by actually participating in it.

These groups have real powers, authorized by the administration of the school and the county board of education. If they couldn’t make real decisions, they wouldn’t gain much from the experience. The student governments sometimes decide the priorities of how certain funds are allocated, or how student activities are organized. Student courts determine guilt or innocence and hand down real penalties.

But what if the students decided to suspend classes and hold a beer party on campus? There is no question that the power of the adult authorities would supersede that of the students.

Of course, this is not a perfect analogy.  The federal government is not the adult parent to the child States (although in this instance, California is acting in a particularly childish manner). But it is clear to any fair-minded person that the power of the US government does trump the power of the States in some matters.

That’s part of the deal every State made with the central government at some point. The original thirteen States were actually independent sovereign governments with unlimited rights over their own priorities and activities. They voluntarily gave up some of those rights in order to gain certain benefits - the common defense, for instance.

Every State that has since joined the Union also gave up certain things – some more than others. Parenthetically, this is an interesting area of study. Each State or territory that became part of the United States over the years since our formation has negotiated its own “deal” with the central government. For instance, the Western States were forced to cede most of their public land to the US government, which was not the case with some of the earlier states.

California has decided that it will not just ignore federal law, but will actively attempt to prevent federal officers from enforcing the law. In so doing the state is declaring its independence from the United States in violation of both the US Constitution and its own State Constitution. A constitutional crisis is in the making.

Jerry Brown was nicknamed Governor “Moonbeam” in his first stint as the State’s chief executive by Chicago columnist Mike Royko because his eccentric policies had made California “the world’s largest outdoor mental asylum.” Since he came out of retirement to become the head nut again, his “Moonbeam” proclivities haven’t changed.

He and the California legislature have led a rebellion against legal authority that most Californians do not support. Yes, despite the radical views of many of the State’s leaders, there are still patriots in California who just want to be citizens of a normal state. They do not believe in Brown’s lunatic fringe policy of protecting illegal aliens to the detriment of legal citizens. They particularly dislike Brown protecting murderers and rapists from deportation, as well as his recent pardon of five illegal alien felons.

Fortunately, the Conservatives of California have come out of the shadows and are starting to defy the State. In a shocking move, California’s third largest County, Orange County, has joined in the Federal lawsuit against California. The second largest County, San Diego County, will vote soon on joining Orange.

In addition, as this goes to press four California cities have either joined the suit or sued the State themselves, and seven others are seriously considering action against the State. And the numbers of rebellious cities and counties grow every week. California has a big problem. It is being called to task from above and below. I predict that SB 54 will not stand.

Brown is becoming desperate and is making stupid decisions. Through his Attorney General, Xavier Becerra, he has threatened to arrest Orange County Sheriff Sandra Hutchens because she has directed her officers to obey federal law and assist ICE in deporting illegal alien felons.

Governor Moonbeam will be out of office soon. His Lieutenant Governor, Gavin Newsom plans to run for the office. Newsom is the former Mayor of San Francisco, an outspoken advocate of homosexual and lesbian marriage, and an adulterer.

His likely opponent will be Conservative John Cox, like Trump a hugely successful businessman. California has a quirky system of electing its governor. The top two candidates in their open primary will face off against one another, regardless of party. So conceivably citizens could have a choice of only two Democrats in the election. Unless the polls change dramatically, Cox will be Newsom’s opponent. Even though he is currently almost unknown, he is second to Newsom, and far ahead of any other candidates.

Cox has a good chance of winning. Many Californians are sick of being ridiculed by the rest of the nation. His campaign slogan is “Reclaim California.” Despite having the highest income tax rate in the nation, California is close to bankruptcy; it has the highest poverty rate in the nation; and it has a huge homeless population living in tent cities. It needs to be reclaimed from the Liberal politicians and given back to the people.

Liberals always seem to take things too far. If Jerry Brown had any sense he could have helped keep California blue for the foreseeable future. But his lust for votes for illegal aliens blinded him to reality so much that he passed the unconstitutional and ridiculous Sanctuary State Bill. The reality is that most Californians – including Democrats – don’t want to see more Kate Steinle disasters. (Steinle was the 32-year-old woman killed by illegal alien Jose Garcia Zarate, who had been deported five times to Mexico. He was able to be in San Francisco and carry an illegal 40-caliber revolver due to that city’s sanctuary policies.)

I think we may see a massive revolt in California. Just as eight years of Obama turned the people’s stomachs and ushered in the era of Trump, Jerry Brown’s manic antics may well turn Californians against Liberalism and Socialism in the next election – and beyond. Think Red, California.