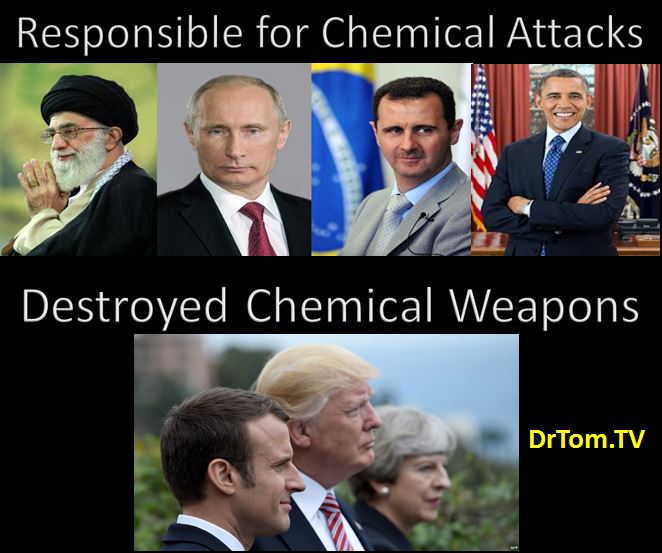 In 2012 Obama announced to the world that his "Red Line" in Syria would be if Assad deployed chemical weapons in violation of all international norms. Assad killed his own people (mostly civilian non-combatants) and Obama - did nothing. This made the US look weak and ineffectual. Assad, along with dictators everywhere (including Kim Jong Un) were emboldened.

Actually, Obama did do something rather weak. He ran to the Russians and asked them to take care of his problem. After all, everyone knows the Russians can be trusted, right?

The Syrians dutifully trotted out some chemical weapons (obviously not all of them), which we destroyed. And Obama's trusted KGB friend Putin promised that he would police Syria and ensure that they never again produced weapons of mass destruction. Obama lied to the American people and said Syria had no more chemical weapons, and no ability to produce more. After all, everyone knows the Russians can be trusted, right?

Since the Syrian people rose up and tried to rid their nation of their murderous dictator, he has killed 513,000 of them. Thousands of those deaths are on Obama's hands, because Assad has conducted 51 chemical attacks on mothers, fathers and their children since Obama broke his promise and allowed Assad to keep those weapons. Last week Assad murdered 40 innocents and wounded 500 more. But Putin said, "It wasn't Syria. Trust me." Why shouldn't we? After all, everyone knows the Russians can be trusted, right?

Once again Trump is cleaning up after Obama. Obama allowed the IRS to be used as a weapon against Christians and Conservatives. Obama sat idly by as hundreds of our veterans died because they couldn't get an appointment with a VA doctor. Obama created a vacuum - and was responsible for the creation of ISIS - when he pulled our troops out of Iraq.

When will the Democrats stop covering up for him and making excuses for his inept presidency? When will they realize that it was Obama's lies and lack of leadership on the world stage that caused the current situation? When will they apologize for electing a community organizer with no vision, no patriotism, and no courage to the highest office in the land?