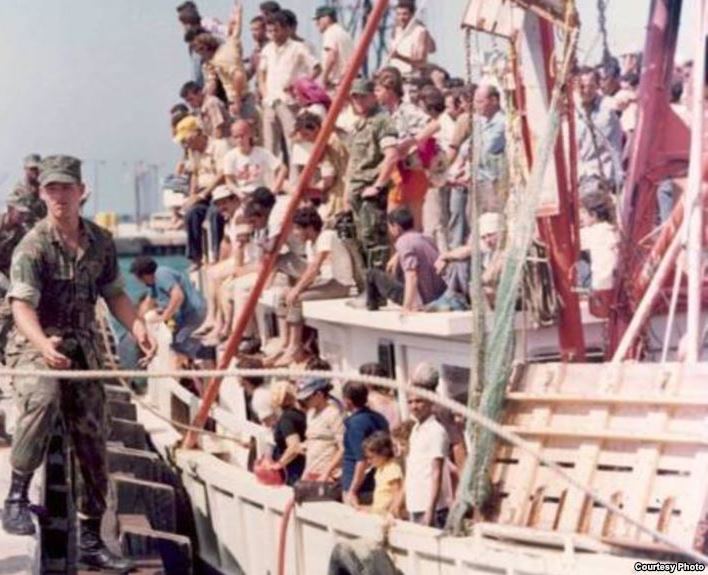 On April 20, 1980, Fidel Castro surprised the world by announcing that he would allow Cubans to leave if someone came to pick them up at the Harbor of Mariel. Cuban exiles in the United States rushed to hire boats in Miami and Key West and rescue their relatives. Altogether 1,700 small boats made the dangerous trip through the Florida Straits. The very next day after Castro’s announcement, the first of some 125,000 Cubans fled the island dictatorship, headed to the United States.

The boatlift was triggered by unemployment and lack of housing caused by the Communist economic system. On Easter Sunday, April 6 10,000 Cubans crowded into the grounds of the Peruvian embassy and requested asylum. Other embassies, including those of Spain and Costa Rica, also gave asylum to smaller numbers. This became a national embarrassment for the dictator, and two weeks later he made his announcement.

What he didn’t announce was his plan to empty his prisons and mental institutions and send Cuba's criminals and mentally ill to the U.S. Floridians who had hired boats were forced at gunpoint to take these people. The Cuban military overloaded some of the boats so much that they sank, drowning those trying to escape oppression.

My wife, who was born in Cuba and one of her friends who also spoke Spanish volunteered at one of the processing facilities, translating and helping the refugees. The RedCross and generous Floridians provided food, water, and clothing to these people who had left their homes with nothing.

When President Jimmy Carter discovered that prison inmates and mental patients had arrived with the Marielitos (as the thousands of freedom seekers came to be known), 1,700 were jailed. Others were detained until sponsors could be found to care for them.

Unfortunately, due to Castro’s duplicity, the Marielitos were shunned by many Cuban exiles already in the U.S. Even though the great majority of those who arrived on the boatlift were good people, the criminals who got through the screening process committed crimes almost daily, making many suspicious of all of them.

Thirty-eight years later, the memory of the Mariel boatlift has faded. The boatlift had a strong negative impact on the South Florida economy, which was not prepared to absorb so many into its labor market, schools, and other institutions. This experience further soured the relationship between the U.S. and Cuba.

Today the great majority of the Marielitos have assimilated into the communities where they settled, and are seen no differently than the hard-working Cubans who escaped both before and after them.