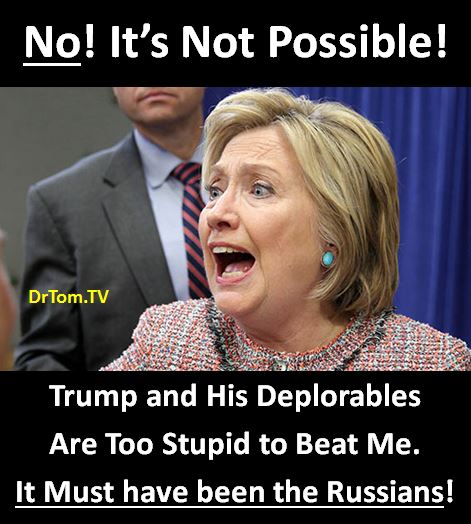 Can a committee sue a sovereign nation? It’s doubtful any sane judge will even agree to hear the fake lawsuit brought by the Democrat National Committee (DNC) against Russia and the Trump campaign. Any judge (except possibly a rabidly Leftist Democrat judge) will take one look at the suit and dismiss it as a frivolous lawsuit and a political stunt that will go nowhere, and will waste the Court’s time. Even a Leftist judge would likely refuse to let the case go forward because it would ruin his or her credibility.

“What do you mean, Tom? I’ve always heard that anyone can sue anyone else any time for any reason.” That’s true. But just because a case is filed doesn’t mean it will be heard. In fact, the majority of cases filed in federal courts never go to trial.

Since this ridiculous case was filed in Manhattan Federal Court last Friday, April 20, 2018, almost everyone – including some prominent Democrats – has opined that the case is a farce. No one thinks it has a prayer of succeeding. So why did the political operatives of the DNC make this foolish decision?

Two big reasons. First, they believe it will fire up their base and encourage them to turn out and elect Democrats in the mid-term elections next November. They also hope to generate more donations. Publicly the DNC has been positive about its chances of taking over the House and possibly the Senate in November. But privately top Democrats have admitted that there is very little chance of that happening.

So, how likely is it that this suit will bring in more money? Bill and Hillary, although totally bereft of any morals, are rich in donors. I don’t understand why, but people love to give them money. By most accounts, Bill left office with more money stashed away than even Obama did. During the 2016 presidential campaign, Hillary kept the DNC afloat.

Today, without Hillary’s huge infusions of cash, the DNC is “Dead Broke” according to news sources. It started 2018 $6.5 Million in debt and had only $6.1 Million in the bank. That leaves the Democrats with only $400,000. That may seem like a lot of money to us, but in national politics, it is – to use Nancy Pelosi’s word – “crumbs.” By contrast, the Republican National Committee (RNC) has $40 Million in its war chest – that’s 100 times as much as the DNC.

How did this happen? DNC insiders have told reporters that big donors have been withholding donations since acting DNC chair Donna Brazile admitted that the DNC rigged the primary process in Hillary Clinton’s favor. Hillary confirmed this, stating that the DNC spent so much on Obama’s campaigns that she was forced to support the organization just to keep the rent paid.

The second big reason the DNC filed the hopeless suit is that they desperately need to keep the false narrative of a Russian-Trump collusion alive. After a year the Mueller Special Counsel investigation has turned up no evidence of any collusion. They have tried to pressure Trump associates into giving them something so they can save face, but even bringing unjust indictments for unrelated matters has given them nothing.

The final straw came last week when Rod Rosenstein, the Deputy Attorney General who is overseeing the Special Counsel witch hunt visited Trump and told him he was not under investigation by either the Special Counsel or the U.S. Attorney who has been persecuting Trump’s personal attorney. This was a huge blow to the DNC.

They had been counting on keeping the fake investigation going until after the elections, at which time Mueller would admit defeat. But even though Mueller, a partisan with a team full of Democrats, had been going along with the plan by dragging out the “investigation,” Rosenstein’s surprise visit to Trump dashed those hopes. Almost immediately afterward the DNC came up with their desperation move- suing Russia.

Why did Rosenstein admit what everyone already knew was true – that Trump never colluded with the Russians? I think he saw the handwriting on the wall and realized that he was in danger of being investigated and possibly facing criminal charges over his involvement in this farce that has cost the nation millions and kept the country in turmoil. After all, he was the one who appointed the partisan Mueller and allowed him to stack his team with Trump-haters.

He was also the one who allowed the witch hunt to spread beyond what had been authorized (discovering whether the Trump campaign had improper interactions with Russians) to the personal lives of Trump’s associates and even to events that took place prior to the campaign.

Worse, when Rosenstein appointed Mueller he knew that he was very close to James Comey. He knew that Comey would likely be called to give testimony in the case he was investigating.  He should have done the honorable thing and recused himself, as Jeff Sessions did. Sessions was involved in the Trump campaign and realized that if he oversaw the Special Counsel it would be a conflict of interest. Rosenstein had a similar conflict, and he should have followed Sessions example.

So far Rosenstein has seen the Inspector General of the Department of Justice investigate Andrew McCabe, the former Deputy Director of the FBI, and recommend that Federal Prosecutors pursue criminal charges against him.  Now James Comey is being investigated, and will likely face charges of lying under oath, among other offenses.  I think these two investigations have opened Rosenstein’s eyes to the dangers he personally faces.

Perhaps the most ridiculous aspect of this ludicrous lawsuit is that there is actual evidence that the DNC colluded with Russians and that they obstructed justice with regard to a federal investigation. And their boy James Comey is witness to both. Comey, by the way, proved his allegiance to the DNC and Clinton when he drafted his exoneration of Hillary weeks before he ever interviewed her concerning her breach of national security and destroying over 30,000 emails subpoenaed by Congress.

Comey told President Trump that the so-called “Steele Dossier” disguised as an intelligence report, was “salacious and unverified.” Christopher Steele, a former spy, was hired with funds from the DNC and the Clinton campaign. His false information, obtained largely from Russian sources, was used to illegally obtain a warrant from a FISA judge who was not informed of the sources of the materials. Comey reiterated his statement under oath before a Congressional Committee.

In an article linked below, Comey also testified that the DNC claimed it had been hacked by Russia, but repeatedly refused to allow the FBI access to their servers to investigate the supposed crime. As it turned out, the main reason for the DNC’s concern was that emails on that server proved that they had illegally colluded with Hillary Clinton to rig the nomination in her favor.  They also revealed the DNC’s involvement in transferring money illegally to the Clintons. No wonder they didn’t want the FBI to see them.

The Democrats still can't believe they lost to Trump. And they can't stand the idea of losing again. So they desperately need the fake investigation to continue. Since it seems that’s not going to happen, they intend to keep it in the news with their asinine lawsuit. It’s not going to work.

The Six Most Ridiculous Claims from DNC’s Conspiracy Lawsuit