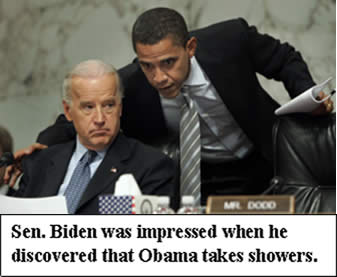 The day he announced his second run for the presidency, Sen. Joe Biden gave the world his candid opinion of Sen. Barrack Obama. He opined that Obama is "the first mainstream African-American who is articulate and bright and clean." (See LINK below.) So, Joe, does that mean all the others are smelly, dumb and can't "talk good"?

Biden tried several different excuses for his inappropriate comments. But coming on the heels of another racist comment ("You can't go to a 7-Eleven or a Dunkin' Donuts unless you have an Indian accent!"), it's difficult to believe that he meant anything other than what he said. It's almost as if he's challenging Democrat Senator Robert Byrd (who was elected "Exalted Cyclops" by the Ku Klux Klan) for the title of Most Racist Senator. Which begs the question: Why in the world did Obama pick a guy who can't get out of his own way as his running mate?

My wife, Ana, had an interesting answer to that question. She said that perhaps he has decided he really doesn't want to be president, after all. Based on his choice of a bumbler who is far more of a liability than an asset, she may have something there.

National polls show that if he had chosen Hillary Clinton as his running mate, it would have given him and additional 5% of the national vote. In a tight race, that could be the difference. Even the Republican National Committee has admitted that an Obama-Clinton ticket would have been almost unbeatable. What does Biden bring to the race? Repeated embarrassing remarks, and three electoral votes. (He is a senator from the small state of Delaware.)

Obama claims that McCain shouldn't be allowed to become president because he had the "bad judgment" to vote for the war in Iraq. He says that McCain is too old to be president. Biden is just a few years younger than McCain. He demonizes McCain as a "Washington insider." Biden has spent almost all of his adult life in Washington as a divisive partisan hack who always strictly follows the Democrat party line (and he's been in the Senate far longer than McCain). On the other hand, McCain is well-known as a Maverick who constantly crosses party lines to bring unity.

I initially titled this article, "The Odd Couple" because Obama and Biden are polar opposites in so many ways. Obama claims to want a "unified, democratic Iraq." Biden has called for the country to be divided along ethnic lines into three countries. Obama constantly rails against the "evil lobbyists" who are "destroying our political process." He claims to hate lobbyists (although he's not shy about using them to his advantage). Biden's son is a Washington lobbyist whose firm lobbied Joe Biden! (See LINK below.)

Obama already has a huge millstone hanging around his neck in the person of his wife, Michelle, whose public remarks haveÂ seriously damaged his candidacy. In addition to her famous remarks about never having been proud to be an American until her husband became a candidate for president, the New Yorker Magazine quotes her as saying that Americans are "guided by fear," are "just downright mean," and "have broken souls." Why doesn't she say how she really feels about us?

Now Obama has hung another huge stone around his neck which may well pull him under. Biden's first presidential run in 1988 was cut short by scandal when he was discovered to have plagiarized another politician's speeches, and fraudulently claimed to have a Master's Degree. At that time a commentator said that Biden has never been considered presidential material outside of his own household. So why does Obama think America has forgotten what Joe Biden is all about?

Biden has often been described as someone who talks way too much because he just loves the sound of his own voice. That sound must be haunting him today. Network news has played two of his statements over and over, one harshly critical of Obama, and the other full of warm praise for McCain.

The first clip shows Biden and Obama next to each other at a debate. The moderator reads a Biden quote in which he says that Obama "...is not ready to be president," and that "the presidency is not something that lends itself to on the job training." Asked if he still felt that way, Biden relied, "I think I stand by that statement." If Obama's looks could have killed, Biden would have dropped dead on the spot. (See LINK below.)

The second clip shows Biden gushing over McCain. He states that he would "be proud to run with or against John McCain," whom he has described many times as a "close friend." But just hours after being chosen he assumed the traditional role of V.P's as "attack dogs." Biden is one of the nastiest people in a city full of nasty people, so he'll be perfect in this role. In his first speech after being chosen he viciously attacked his "close friend" John McCain; the very man he had said he would be proud to run with.

Obama refers to Biden as a "strong Catholic." His campaign strategists believe that Biden will give him a much-needed edge with Hillary Clinton's base - working class, predominantly Catholic whites. But Biden is militantly pro-abortion, so by definition he is not a "good Catholic." In fact, Biden is lucky he doesn't live in one of the many Catholic dioceses where the bishops refuse to allow pro-death politicians to take communion. It is unclear how Joe Biden is going to help Obama sway the hearts of real Catholics.

A candidate's choice of his vice-presidential running mate usually excites little interest with the press. But this announcement has resulted in a full-blown media circus, with helicopters circling Biden's home, and commentators commentating all day long the day after the announcement. There are two reasons for this unusual attention.

First, Obama waited until the very last second to make his announcement. When he did finally make it, it was in the dark of the night. Many think he did this for dramatic effect. I think it was because he couldn't make up his mind. Many of his advisors wanted him to pick Hillary, but his wounded pride wouldn't allow that. (She hurt his feelings by saying mean things about him during the campaign.) Hillary got more votes than he did, and still has a huge following. 20% of them swear they will never vote for Obama.Â He was deathly afraid of the backlash that he was sure would ensue when he passed her over, so he made his announcement by sending out a text message (see LINK below) at 3:00 AM!

I believe that the second reason is that he didn't really want Biden to be his V.P. After he announced that Joe Biden had been chosen, the Associated Press said that the choice "shows a lack of self confidence on Obama's part." Obama wanted someone who would shore up his image as a "change agent," but his advisors told him he needed someone to balance his weakness in the area of foreign affairs and his inexperience (he had only been a junior senator for 14 months when he announced for president). Because he knew this to be true, he chose Biden.

The problem for Obama is that just because Biden has been a Washington insider for almost four decades doesn't mean that voters will rush to support Biden-Obama. Biden doesn't have any better judgment than Obama does. He is known in Washington circles as a blowhard who gets along because he knows where all the skeletons are buried.

Biden's "foreign policy credentials" are a joke. Yes, he convinced Bill Clinton to bomb innocent people in Kosovo. And yes, he is Chairman of the Senate Foreign Relations Committee. But that's only because his party is in power, and he's been there forever. The bottom line is that he weaseled his way onto the foreign policy committee (which has little or no effect on foreign policy) because he thought it would be good experience when he ran for president. He has never had any direct foreign policy experience.

But he has been extremely critical of Obama's foreign policy statements. On Iraq he accused Obama of "...cutting off support that will save the lives of thousands of American troops." Asked if he would meet with leaders of terrorist states, as Obama has said he would do: "Absolutely, positively no!" On Obama's plan to invade Pakistan: "The last thing you want to do is telegraph to the folks in Pakistan that we're about to violate quote 'their sovereignty'." And Biden has praised Senator McCain's foreign policy experience and ideas! (See LINK below.)

A new ABC News - Washington Post Poll showed McCain with a two to one lead over Obama when voters were asked, "Who is more knowledgeable about world affairs?" and "Who is better suited to be president?" In the same poll 50% said they know almost nothing about Joe Biden, and 25% said they've never heard of him. When asked about Biden's impact on the ticket, 75% said that Obama's choice of Joe Biden will make "no difference" in their vote. Of the remaining 25%, half said that Biden will make them more likely to vote for Obama, and half said it will make them LESS likely to vote for him. A net change of 0%.