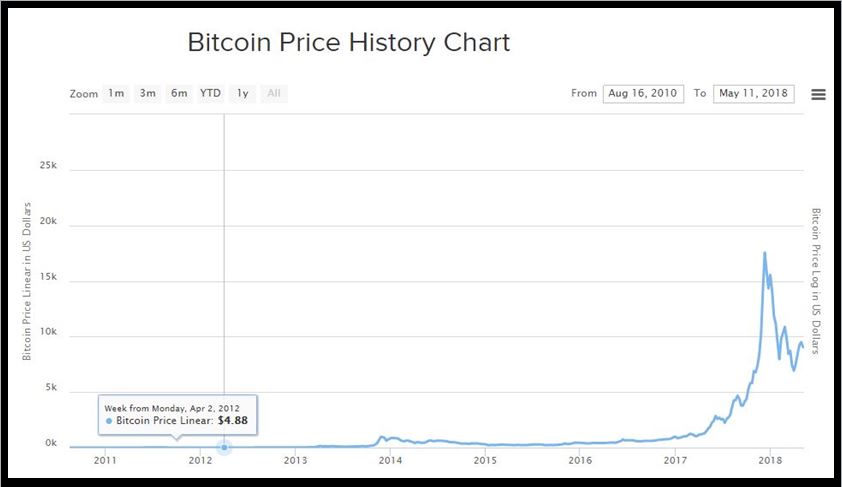 Because of my decades of experience in investments, there’s hardly a week goes by that someone doesn’t call me and ask, “What do you think about Bitcoin?” Sometimes they ask about cryptocurrencies in general. But inevitably the word “crazy” finds its way into the conversation.

Sometimes it’s “crazy” in the sense of “volatile.” “It’s up, it’s down. Who knows what’s going to happen next?” Usually, these are people who don’t follow cryptocurrencies closely. They hear an occasional price and don’t realize that even with the frequent big drops, Bitcoin is still in an overall uptrend.

I will do a thorough study of the price action of Bitcoin and the cryptocurrency markets in general in another article. (There are well over 1,800 “coins” out there as of this writing.) But the purpose of today’s analysis is to examine the basis of the value people put on cryptos when they buy or sell them.


Many people think that there is no real value to cryptos.

“It’s all smoke and mirrors.” Or, “They’re just bits and bytes on a computer somewhere.” Or, “There’s nothing solid. They’re not like real money.”

That one is my favorite. It always makes me chuckle. What we call “money” in this country has no backing whatsoever. Our bills are just promissory notes – IOU’s from the government.  Prior to 1933, a U.S. $20 bill was a United States Note labeled as a Gold Certificate. It carried this legend: “There have been deposited in the Treasury of the United States of America $20 in Gold Coin, payable to the bearer on demand.” (In those days an ounce of Gold was worth $20. Today that same coin is worth around $1,400.)

Look at the “money” in your wallet. Its legend says it is a “Federal Reserve Note.” The only thing the government is required to give you for a $20 bill is two $10’s; four $5’s; or twenty singles. In other words, more paper – but nothing of value. Sound far-fetched? Read this quote from the Resource Center of Treasury.gov in answer to the question, “What are Federal Reserve notes and how are they different from United States notes?”

“Federal Reserve notes are not redeemable in gold, silver or any other commodity, and receive no backing by anything. This has been the case since 1933. The notes have no value for themselves, but for what they will buy. In another sense, because they are legal tender, Federal Reserve notes are ‘backed’ by all the goods and services in the economy.” That’s comforting, isn’t it? Just wave your $20 bill in the air to get your share of “all the goods and services in the economy.”

In reality, our “money” is no more real than cryptocurrencies. 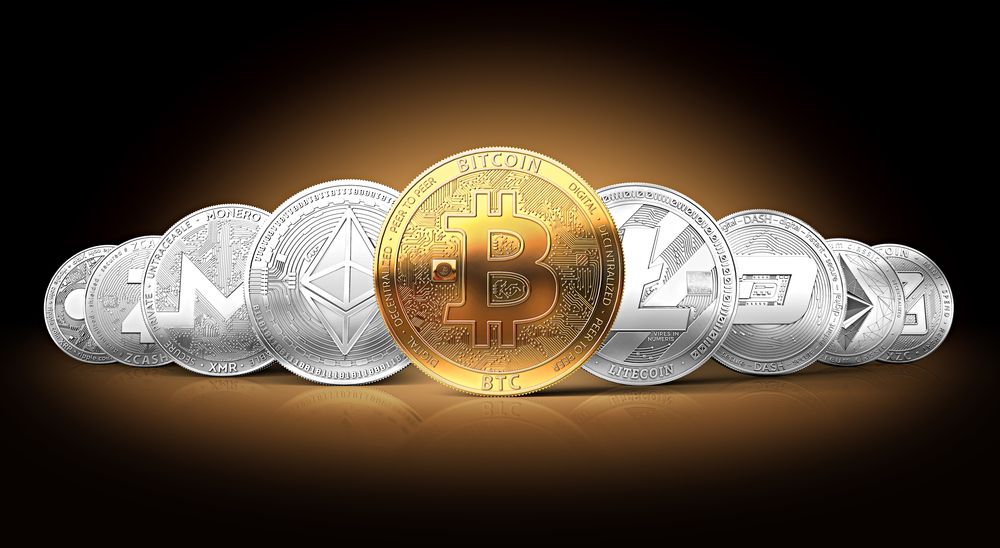 With that in mind, let’s examine what cryptocurrencies really do. Many people think of them as just a trading vehicle. A trading vehicle is something without any intrinsic value (value of its own) that you can buy low, and hopefully sell high to create a profit. A trading vehicle that you might be familiar with is the S&P 500 Index. When you buy the index, you are not actually buying the 500 stocks in the index. You are basically placing a bet. If you’re right and the bet you place (usually with an options or a futures contract) goes up, you make money.

The S&P 500 Index is a trading vehicle. Bitcoin is NOT, because it has real intrinsic value in and of itself.  How can I make this statement? Because you can buy goods and services with Bitcoin. You can buy products online. You can pay for services online. And in what my daughter calls IRL (In Real Life) you can buy such things as Gold, real estate and vehicles with Bitcoin. (Try doing that with your S&P 500 contract!) So Bitcoin is more “real” than many of the investment vehicles (derivatives that derive their value from something real, like a stock) in which people invest hundreds of thousands of dollars.

So, if cryptocurrencies like Bitcoin are more than just trading vehicles that you can ride up and down like a roller coaster, what makes them more valuable? The fact that they are used in commerce – just like the real money we used to have. The difference is that they can’t be manipulated by the bankers and politicians – like the monopoly money issued by the Federal Reserve System.

What is money, anyway?

There are dozens of definitions, but most thinking people agree on two major factors. One is that it is a store of value. The other is that it can be exchanged for goods and services. Many things may meet one of those two qualifications. But only real money meets both.

For example, real estate is a place where you can store value. But you can’t spend it. Yes, you can sell it for money, and spend that. But the dirt itself is not money.

What about food (or bubble gum, for that matter). You can exchange food for goods and services if someone has something you want, and also needs your food. But that’s not money, because food is not a store of value. That’s barter. 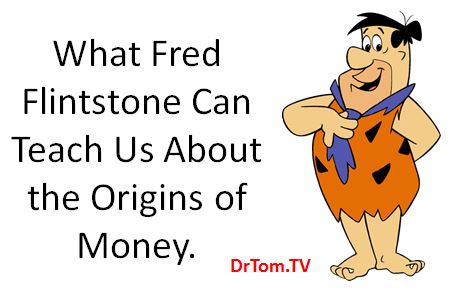 Before we had money, this is how business was done...Fred Flintstone had a chicken that he wanted to trade for a club. But he didn’t know anyone who had a club and also wanted his chicken. Barney Rubble wanted his chicken, so he traded him an arrowhead for it. If Fred was lucky, he found someone who would trade him a club for the arrowhead. If not, it might take many trades before he got what he wanted.

But what if Fred could sell his chicken for a piece of Gold, which was universally prized? He could then use the Gold to buy the club and go bang a dinosaur over the head with it. He just skipped all the bartering and trading. That’s money. It was something that Fred could use to store value. (If he has a lot of chickens he didn’t need, he could store their value in Gold before they died or ran away.) The Gold was also something he could use to buy anything he wanted, any time he wanted.


Does Bitcoin meet the definition of "money"?

Can I store value in it by using U.S. (or another nation’s) money & buying Bitcoin? Can I spend Bitcoin for things I want? Do you get it?

Of course, there are many qualifiers in this general discussion. For instance, you can’t buy anything you want with Bitcoin today – although the time is coming when you will be able to do so. In addition to the products and services described above, banks are now using a crypto “coin” called Ripple to make interbank transfers. When banks accept something, it is definitely coming of age.

And all cryptocurrencies are not created equal. Bitcoin is the Big Daddy of cryptos – sort of the Coke to all the other sodas in the store. Bitcoin is in a class by itself. All other cryptos are called “Alt-Coins” (alternatives to Bitcoin). The next level is the major alt-coins – the “name brands” that most people know, like Etherium and Litecoin. Depending on who you talk to there are about 100 substantial coins in this category. Then there are the wannabe coins – the penny stocks of the crypto world. Most of them will fail; a few will grow up and become major alt-coins. (There are also ICO’s and tokens, but we won’t get into them here.)


Cryptocurrencies are real – and they're not going away.

The main thing you should take away from this is that cryptocurrencies are real – some would say more real than the “fiat” money we carry. And they’re not a fad – they’re here to stay. They have already started changing the way the world does business in a small way. Before long, it will be in a major way.

You’re probably thinking, how can I profit from this? Two ways: Picking and buying a coin or coins, and holding for the long-term – no matter what happens. Or actively trading the market so that the volatility becomes your friend rather than crushing you.

It should be obvious to any serious observer that a “buy and hold” strategy is not the best way to profit from cryptocurrencies. That will work in the long run, but it can be quite painful in the near term. Just ask the people who bought Bitcoin at $15,000. 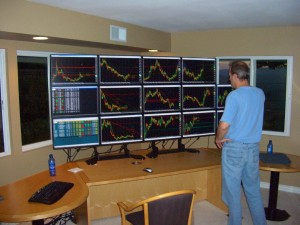 Some experienced traders trade numerous coins for short-term gains and make phenomenal gains. The problem is that having money to trade is only part of the equation. You can’t buy experience. I know someone who makes upwards of 400 trades almost every day. He wins on most trades, but typically only makes 1.5% to 3%. That’s not a big percentage, but multiplied by hundreds of trades, it tends to add up.  It takes tremendous knowledge, experience, and – most of all – discipline. But he consistently makes returns that would be unbelievable in the stock market.

The best advice I can give anyone considering dipping a toe into cryptocurrencies is to choose one of two paths. Start studying like crazy, become extremely familiar with your chosen market, and then “paper trade” for at least a year. Don’t put your hard-earned money at risk until you’re winning the great majority of the time.

The other alternative is to carefully and prayerfully choose an expert trader with a verifiable track record, and let him or her trade for you. This is not as much fun as trading yourself – but I can tell you that it is a lot less stressful.

Two final notes: First, if you decide to get involved, whichever method you use – only put a small part of your net worth into this market. What percentage you decide on is up to you, but I can tell you I would not put more than 10% of my net worth in cryptos. Second, if you are fortunate enough to make the huge returns some have, make sure you remove your initial investment from the market as soon as possible and let your profits run. That way you can never truly lose in the cryptocurrency markets.