Who Will You Choose? 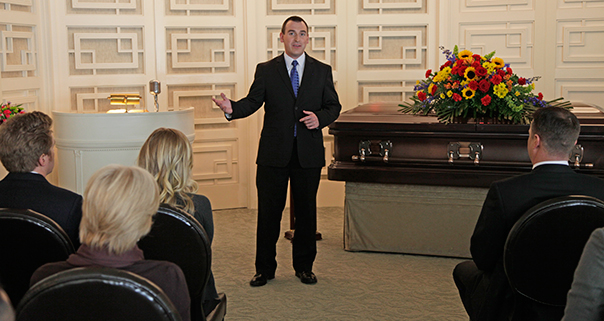 You may have never thought about this. But someday you may need to select the person who will be the celebrant at your loved one’s funeral – or possibly your own.

We have seen two very high profile funerals recently. All the details were televised. What you may not know if that every detail of those funerals had been planned by the “guest of honor.” Of course, we are speaking of Billy Graham and former First Lady Barbara Bush. One of the most important people each of them planned in advance was the officiant.

Funeral officiants or celebrants are often confused with funeral directors. A funeral director works for the funeral home that coordinates and arranges the funeral. He or she may write the obituary (with input from the family) and submit it to the local newspaper. They also may prepare the body for burial or cremation and may make those arrangements.

The officiant, on the other hand, runs the funeral itself, as well as the graveside service if that is done. This person is not just the speaker; there may be several speakers during a funeral. Think of the celebrant as sort of a master of ceremonies. He or she will usually begin the service, recognize the family, and introduce the other speakers who give eulogies or remembrances. They will also typically be the person who closes the ceremony.

Although the celebrant works with the funeral director to make sure everything runs smoothly, their responsibilities fall into two major areas. The funeral director (sometimes known as an undertaker or mortician) is responsible for all the physical arrangements surrounding the funeral. The officiant ensures that the wishes of the deceased are followed regarding their values, desires, personality, and spiritual beliefs.

We have been using the terms officiant and celebrant interchangeably. (The term funeral conductor is also to refer to a person who directs the activities at a funeral.) The main difference between an officiant and a celebrant is that an officiant is a member of the clergy. A celebrant usually refers to a non-clergy professional who arranges funeral ceremonies that are not tied to any particular religion, doctrine, or even a belief in the after-life.

So, obviously, the choice of an officiant will be heavily influenced by the religion (or lack of a religious preference) of the deceased. If the decedent was not an active attendee of any religious services, one of three things may happen. The family may decide to choose to employ a celebrant who will provide a non-religious ceremony instead of an officiant. They may choose a clergyman from the religion the decedent practiced in earlier times. Or they may decide to choose someone of their own religion who might best comfort them in their time of grief.

Which is Most Important?

The last choice above is important to consider. Many people believe that the funeral is more for those who remain than for the one who is gone. Whether or not you subscribe to this philosophy, at least a part of the job of an officiant or celebrant is to provide comfort and closure to the family and friends to help them as they grieve.

On the other hand, many believe that the wishes of the deceased should be paramount - there is a problem with this. They may not have made their wishes clear, which may result in family members arguing over what they believe their desires would be. There is a simple answer to this problem: planning and communication.

If you are interested in pre-planning your own ceremony, or if you are a family member of someone who should be doing so, a company named OneSecurePlan can help with both planning and communication.

When you visit www.OneSecurePlan.com you will notice the saying, “Life Happens – Plan Ahead.” You or your loved one can use the Plan to list funeral arrangements, choice of an officiant, and other important details. Final messages to family and friends can also be stored there.

This is just one of the many aspects of OneSecurePlan’s service. Users can also store important documents (including the will or trust documents); information on insurance and retirement plans; digital assets such as passwords to email and social media accounts; and many other items that will make settling one’s estate much easier. If you spend a little time setting up such an account, you will be a hero to your heirs or executor by saving them days of searching for the things you have already stored in the Plan’s secure online vault.

Whether you use this plan or store your last wishes and documents some other way, it is important to:
1) Make plans ahead of time
2) Store them safely
3) Let your family know where and how to access them