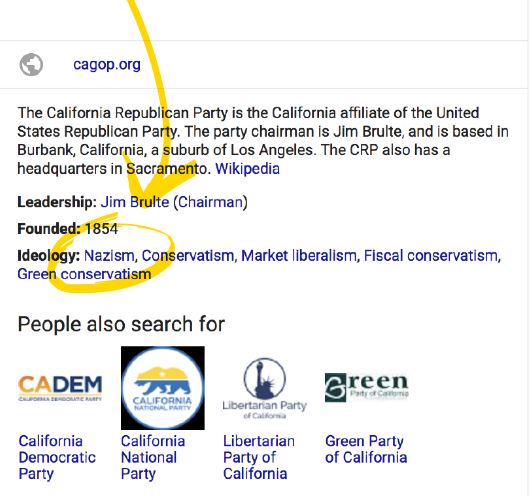 Google's Leftist leanings are well-known. But this week they went far too far. They labeled the entire California Republican Party "Nazis." And they called Dr. Trudy Wade, a sitting NC GOP State Senator a "Bigot."

Naturally, they claim these were "honest mistakes" (as they have done with similar incidents in the past). "It's the computer's fault." Really? We thought you were a great tech company. Can't you control your computers?

I once worked for a company that regularly shorted my monthly commission check. They were like Google. "Sorry, we made a mistake." Or, "The computer did it." Finally, I had had enough. I said, "I can understand mistakes. But if these are honest mistakes, why are they always in favor of the company? Why hasn't there been one time when I got paid too much rather than too little?"

I have much the same question for Google. "If these are honest mistakes, why haven't you ever called a Democrat, a Liberal, or other Socialist a lying bigot. Why haven't you labeled the racists of the Left? Why are the victims of your 'mistakes' always patriotic Conservatives?"