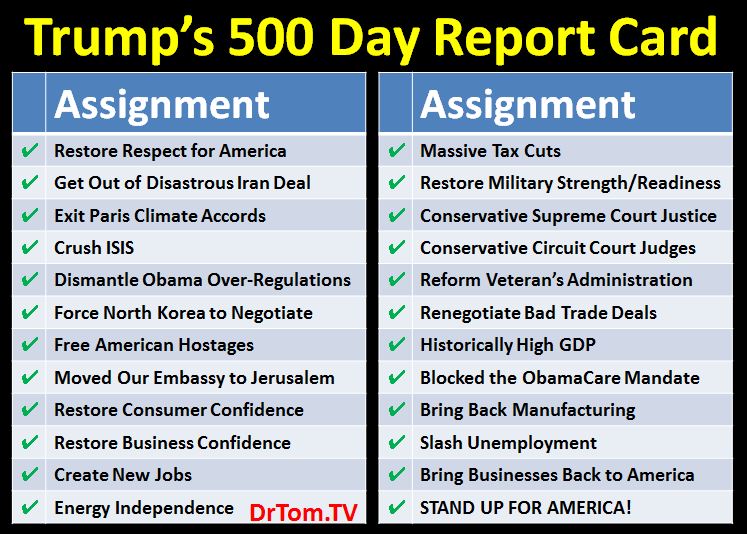 Today is the president's 500th day in office. How much did you accomplish in your first 500 days on any new job you’ve ever had? More to the point, how much have any of the president’s detractors – many of whom have held public office for decades – accomplished in all their years in politics? The answer is obvious.

The reason is obvious, as well. The people who hate our president the most are those who are most threatened by him – the perpetual political class. Congress has expanded from gentleman patriots who met for a few months a year and returned to their farms and businesses - to political animals who make politics a career and will do almost anything to remain in office for life. They have no desire to finish anything, especially quickly or efficiently. Doing nothing useful, as slowly as possible, is job security for them. (Of course, there are some in Congress who are there for the people and do good work. Unfortunately, they are in the minority.)

Remember that annoying kid in high school who actually did his homework, turned his assignments in on time, and always had the answer to the teacher’s questions? He made everyone else look bad. That’s the way the perpetual politicians feel about Trump – they hate him because he gets things done, and doesn’t waste time at it. He’s a businessman, not a politician. And they will never forgive him for that.

President Trump works for “We, the People.” We sent him to Washington with a number of assignments. He hasn’t accomplished all we sent him to do, and some of the things he has accomplished still need some work. But, as you can see, he has an amazing list of accomplishments. I call these assignments because they are the reasons he was elected by a huge electoral majority. They are also promises because he pledged to do the things real Americans sent him to do.

I expressed these in the form of a “Report Card” to save time. I could easily write an entire article on each of these triumphs. However, I will take time to expand on a few of the more important points.

Take a moment to look at May’s economic numbers – they are astounding:
In addition, we have seen North Korea literally begging to negotiate after Trump canceled the summit. (He canceled it after it has been scheduled when the North Korean dictator started threatening the US with nuclear war again.)

Also, in just 500 days he has changed the composition of the federal judiciary. In spite of Democrats trying to torpedo every appointment made by the president, almost 13% of all circuit court judges on the bench today were appointed by Donald J. Trump. You can be sure they are strict constitutionalists who will interpret the constitution and the law – and not try to make laws from the bench like Obama’s appointees have done.

Are you getting tired of winning? On his campaign, Mr. Trump warned that we would win so much that we would get tired. I’m not there yet. There are a few big wins that he promised that he hasn’t been able to pull off yet. What are the big wins that are still to come? We desperately need The Wall. A nation without defensible borders is simply not a nation. If anyone who wants to break in can do so, soon we will no longer be able to recognize America.

The Swamp needs more draining. The president has fired some of the worst swamp creatures, but there are still millions of bureaucrats who are not loyal to America. They are Socialists devoted to a GBBG (Global Big Brother Government). They really believe the UN is not powerful enough, and that America should subordinate itself to a one-world government. Unfortunately, they are protected by outdated civil service laws that must be changed. And of course, there are dozens of other swamp rats (of both parties) that can only be voted out.

He won’t be able to continue winning without our help. We have to give him a Congress next November that will help, not hinder, America’s agenda. That means we cannot allow the Wicked Witch of the West to become speaker of the House again. And we have to increase the number of patriots in the Senate so that the president doesn’t have to beg to get his nominees, like Conservative judges, approved.

Your part is to support him in every way – in prayer, by voting, by campaigning, and with donations. Don’t support anyone just because of their party label. Support them because they share your Christian values, because they vow to support and defend the Constitution against the Liberals who hope to dismantle it, and because they pledge to support the president’s agenda. Not because it is Donald Trump’s agenda – because it is the agenda of the millions of Americans who sent him to Washington with a long list of important assignments.