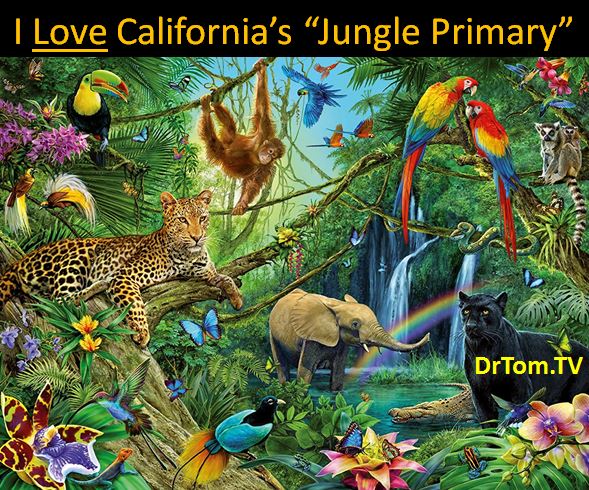 Last Tuesday a number of key House seats were up for grabs in California. A few years ago they rigged their primaries to favor Democrats. They created what the press calls "Jungle Primaries" (for the idea that the Law of the Jungle - the survival of the fittest - prevails). Now it may backfire on them.

In most states, each party holds its own primaries. The winner of each - typically one Republican and one Democrat - then slug it out in the general election. California changed its primary system to one where all the votes for everyone in any party get thrown into the same basket. The top two vote-getters then proceed to the general election - regardless of party.

The heavily Democrat State legislature passed this because most Californians are registered as Democrats. The idea was that two Democrats would get the most votes. Whichever one won, the Democrat Party was happy.

Unfortunately for them, their "Sanctuary State" law, high taxes, and restrictions on First and Second Amendment rights have turned off a lot of voters. So it is highly possible that some of these primaries may end up producing two Republicans running against each other. I guess that's always the danger when you try to rig the system.

The Democrats and Republicans have colluded over the years to create a virtual monopoly over our political system. Monopolies are never a good idea, for obvious reasons. Our system should allow for the full participation of ALL political parties. Then the politicians would be forced to be more responsive to the people.