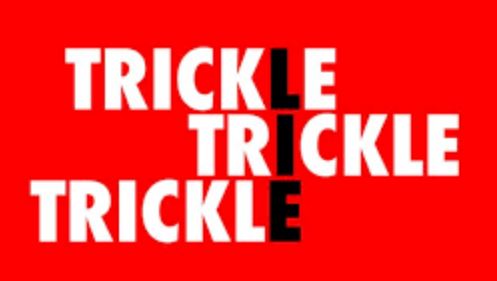 At some point, America is going to have to start ignoring who is espousing a position and look at the facts before we decide whether something is true or not. If we continue to base our beliefs on which person or party is presenting the case, we will continue to be a confused, uninformed people.

One example of this is The Wall. The Secure Fence Act of 2006 passed with massive bipartisan support. In the House, the vote was 283 – 138. The vote in the Senate, it was even more impressive: 80 – 19. Most Democrats voted for it, including almost all the Democrats who publicly despise it today. What’s the difference? Trump wants it today, so Democrats feel duty-bound to trash it.

In the past, Republicans were the biggest supporters of the FBI, and for much of their history, the Democrats hated them. Today the Republicans are calling out the FBI and the Justice Department for obvious political bias, and the Democrats feel compelled to come to their defense.

Here’s the definition of Stupid: Hating or reviling someone or something because your opponent likes it or them, and loving or praising someone or something because your opponent dislikes it or them. Doesn’t that sound juvenile, like something middle-school kids do when their clique comes into conflict with another clique? It is juvenile – and most Americans – Republicans and Democrats – act that way.

Let’s take the current status of the FBI in the U.S. Not long ago the Democrats loved the FBI, and particularly Director James Comey because Comey white-washed Hillary Clinton’s illegal act of setting up a private email server and exposing Top Secret information to hacking by the Russians and others. Comey:


1)      Wrote a memo exonerating her from wrong-doing months before she was interviewed.
2)      Let her be interviewed without being placed under oath.
3)      Allowed her aides to be in the room during the interview.

All of this was against FBI protocol, and indeed probably against the law. And the Democrats loved him for it. He had saved the election for Hillary.

Then, just before the election, Comey held an unauthorized press briefing during which he laid out damning facts that exposed all the criminal acts Hillary had committed. America watched with bated breath, sure he was going to announce that she would be criminally charged. In the end, with great drama, he said he had decided not to prosecute her. Now the Democrats hated him and the FBI again because even though he didn’t charge her, he had made it clear that she had committed criminal acts. They feared it would cost her the election.

What about the Republicans? When the Democrats had attacked the FBI and the Justice Department in the past, the Republicans had stood up for them. They were our clean-shaven, neatly suited professional G-Men. They were the epitome of patriotism, honor, and justice. They were heroes.

But since the election, revelation after revelation, leak after leak, and investigation after investigation have revealed corruption at the highest levels of both the FBI and the Justice Department.  Shocked Republicans discovered that the men and women they had always trusted to enforce the law fairly and evenly had used that very law to help Hillary Clinton win the White House, and to try to take Donald Trump down after he won.


1) Trump was right to fire James Comey, as he had been guilty of disobeying orders, usurping the authority of the Attorney General, and deliberately leaking classified information to the press. The IG described his actions as “extraordinary and insubordinate.”

3) Obama claimed that he “heard” that Hillary was using a private email server at the “same time” as America did – through the press. However, emails were found both to and from Hillary’s secret account from Obama.

4) Adulterer Peter Strzok and adulteress Lisa Page were senior FBI officials. Strzok was the lead agent in both the Hillary Clinton email investigation and the Mueller investigation into Russian involvement in the election. Page was the personal legal counsel to the now-fired Deputy Director of the FBI, Andrew McCabe. They were both demoted and removed from the Mueller probe - not because they were married people carrying on an affair against federal regulations – but because they had demonstrated extreme bias against Donald Trump.

5) Page has since been forced to resign. Strzok, once one of the most powerful agents in the FBI, now works in Human Resources. They exchanged over 50,000 texts during the campaign and after, in which they referred to the candidate and then president as “an idiot,” a “douche,” and much worse. They stated that they had a “plan” to make sure he would never get elected. When he was elected, they made plans to “stop” him.

6) The former chief lawyer for the FBI, James Baker, resigned the same day as Page did. He was accused of leaking classified information related to the “dirty dossier” paid for by the Hillary Clinton campaign.

7) Five other as-yet-unnamed FBI agents involved in investigating the Trump campaign also showed great antipathy toward Trump, and disparaged the millions of voters who voted for Trump. Their unprofessionalism may get them fired.

The Inspector General has referred these five FBI agents for disciplinary penalties. He discovered that they had sent dozens of anti-Trump texts to fellow biased Special Agents. One referred to Trump supporters as “retarded” and declared “I’m with her” (Clinton). Another texted that “Trump’s supporters are all poor to middle class, uneducated, lazy POS.” (Pieces of S**t.) An FBI lawyer texted that he was “devastated” by Trump’s election and stated, “I never really liked the Republic anyway.” This lawyer became the “primary FBI attorney assigned to (Russian election interference) investigation beginning in early 2017,” according to the IG Report.

The Inspector General’s Report shows a clear and unconcealed bias against Donald Trump and for Clinton – among the very agents and lawyers charged with investigating the two. With this much fierce partisan opposition, it’s no wonder that the FBI has used unfair and antagonistic techniques toward Trump associates while treating Clinton and her aides like American royalty.

Of course, now that the Republicans have seen the evidence of political bias in the FBI and called them out, the Democrats are once more the cheerleaders for the FBI. They’re calling Republicans “unpatriotic” for daring to state the obvious – that there is massive corruption in the FBI and the Justice Department that is supposed to keep the FBI honest.

So, again, when will Americans learn to look at the facts, regardless of which party or person benefits from the actions of governmental agencies? We should all have an investment in keeping two of the most powerful and critical institutions in our nation, the FBI and the Justice Department honest. And we should work together to restore their tarnished reputations.

Which brings me to my final question:  Does all the corruption in the FBI exist only on its top levels? The president, government officials, and pundits all preface any discussion about the lies, bias, deceit and outright corruption in the FBI by saying, “Of course it’s just the leadership. The rank and file agents are all perfect.”

Are they? I have studied the history of nations and of organizations. It is very rare for the top levels of any group to commit serious sins without help from people on the lower rungs of the ladder. In the case of the FBI, hiding evidence, slow-walking documents subpoenaed, redacting non-confidential information because it was embarrassing to the FBI – none of these things could have been accomplished without the cooperation of the rank and file.

Perhaps they performed these acts against their wills because they were ordered to do. Perhaps they did them to keep in the good graces of superiors hoping for a promotion. In either case, they knew that what they were doing was wrong, and should have reported these activities.

It is no surprise to me that this organization that was founded by one of the most corrupt people to serve in U.S. government service would retain some of that corruption in its institutional makeup.

There have been many books written about the perverted blackmailer who founded and ran the FBI like a dictator. I’ll just hit some of the high points. Study the man. You will find yourself both fascinated and at the same time extremely disgusted.

J. Edgar Hoover was a cross-dressing closeted homosexual. He traveled everywhere with his “assistant,” Clyde Tolson. Tolson always shared his hotel rooms, and Hoover left him the bulk of his estate.  But no one could say a word about him, because he used the FBI to gather dirt on everyone.

He was a blackmailer extraordinaire. He illegally gathered information on Congressmen, presidents, and powerful business people. He influenced business deals for personal profit, and he used his leverage to force Congress to pass (or not pass) bills according to his whim.

Richard Nixon was recorded in 1971 stating that one of the reasons he did not fire Hoover was that he was afraid of reprisals against him from the FBI Director. President Harry S. Truman said that Hoover transformed the FBI into his private secret police force: “We want no Gestapo or secret police. The FBI is tending in that direction. They are dabbling in sex-life scandals and plain blackmail. J. Edgar Hoover would give his right eye to take over, and all congressmen and senators are afraid of him.”

After Hoover’s death, his homosexual lover and his secretary reportedly destroyed his secret blackmail files. What honest FBI agents survived under him started working to root out the institutional corruption from the organization, and did their best to build the FBI into an organization of which America could be proud. To a large extent, they have succeeded.

Both the Director and the Deputy Director of the FBI have been fired. Key malefactors at lower levels have been identified by the IG’s report.  But there are dozens, perhaps hundreds, more that need to be rooted out and fired.
The new Director, Christopher Wray, seems to be a good man. He’s saying the right things. But we will see if he is committed to an honest and ethical FBI by his actions, not his words. He needs to fire Peter Strzok immediately. The IG’s report gives him ample cause to do so. Then he should fire the five agents identified by the IG. Finally, he needs to go after the leakers and the political operatives in the FBI. Everyone, including FBI agents, should have political beliefs and should vote. But they should never let their politics influence their duties, as dozens of them have done in the last several years.

Comey’s Own Memos Reveal that He Repeatedly Lied to Trump
https://www.investors.com/politics/editorials/comeys-memos-reveal-how-he-repeatedly-lied-to-trump/