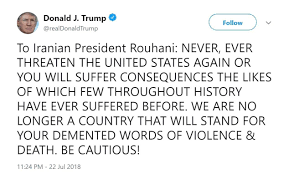 BREAKING NEWS! Trump sends “mean” Tweet to the Iranian president. His use of all capitalized letters pushes the U.S. to the brink of nuclear war!
If you listen to what their political leaders say, that seems to be what Democrats believe. Apparently, when the leader of a worthless nation like Iran threatens us with war, we are supposed to send a diplomat to call on their diplomat and quietly (and privately) express our displeasure.
Trump is not built like that. Iran is the world’s top exporter of terrorism (and the biggest financier of terrorists). Iran kidnapped and held hostage 52 American citizens for 444 days. They regularly whip their people into a frenzy of chanting “Death to America.” They want to annihilate Israel, our only ally in the Middle East. But Trump is supposed to be polite to them?
Look what polite has gotten us. Obama was so desperate to have something he could call a legacy that he made an atrocious deal with Iran that guaranteed they would have nuclear weapons in ten years. And he gave them $150 Billion which they used to continue financing terror.
The Secretary of State John Kerry admitted as much: "I think that some of it will end up in the hands of the IRGC (Islamic Revolutionary Guards Corps) or of other entities, some of which are labeled terrorists.  I’m not going to sit here and tell you that every component of that can be prevented." Some of it, Mr. Kerry? What could stop them from spending all of it on terror, once they had it?
We’ve tried polite diplomacy with Iran since 1979 – with no results. Terrorists only speak one language, and Donald Trump is fluent in that language when it is called for. So was Ronald Reagan. Wimpy Jimmy Carter played nice with Iran while they abused 52 American hostages for well over a year. But the day Reagan was inaugurated, Iran released the hostages. They knew he would unleash the full wrath of the U.S. military on their towel heads.
The Democrats should thank the president. He’s the first president since Reagan who has had the guts to speak the truth. It got results in North Korea, and it will get results with the Muslim maniacs who run Iran.
Copyright ©2018
Read more by Dr. Tom Barrett
Tweet